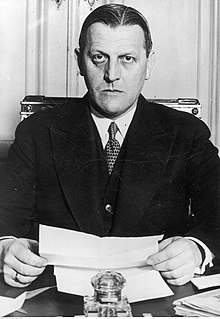 Emil Fey (born March 23, 1886 in Vienna ; † March 16, 1938 by suicide ) was a major in the Austro-Hungarian Army , Heimwehr leader and politician of the First Republic and the corporate state . As a declared opponent of social democracy , he ruthlessly exploited his position of power as vice chancellor and security minister to fight the social democrats. His political activities played a major role in the domestic polarization in the First Republic and in the uprising of the Republican Protection Association in February 1934 . 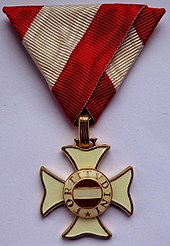 The strictly educated son of a civil servant had been a career officer since 1908. Fey took part in the First World War mainly as a member of the Vienna House Regiment Hoch- und Deutschmeister No. 4 . He was wounded several times and received the nomination for the Military Maria Theresa Order (the highest honor for officers of the Austro-Hungarian Army ) in 1916 , which Major Fey was not actually awarded until 1922 by resolution of the Chapter Chapter. The elevation to the baron status associated with the awarding of the medal was rejected by ex-empress Zita in 1924 , but confirmed by her son Otto on October 15, 1934 after he was of age: "Freiherr von Reitelstein". Therefore, the Association of Catholic Nobles in Austria recognized Major Fey as a member.

After the war, he fought in the national armed forces in the Carinthian defensive battle against the army of the Yugoslav SHS state . He was the editor of the Austrian military newspaper and director of the Vienna military casino. In 1923 he founded the "Deutschmeister-Heimwehr", then the Vienna Warrior League. In 1926 he became president of the Vienna Comradeship and Warrior Association.

Fey's political career began in 1927 with the establishment of the "Wiener Heimwehr"; at the same time he was involved in the Christian Social Party . He rose rapidly in the hierarchy of the Austrian Home Guard movement . In 1931 he became the national leader of the “Wiener Heimatschutz”, as the former “Wiener Heimwehr” called itself after a new formation.

As a home guard leader, Fey was always known as a rival to Ernst Rüdiger Starhembergs , who also played an important role in the home guard movement. Both politicians and their paramilitary formations were essential power factors for Chancellor Engelbert Dollfuss and Kurt von Schuschnigg's ambitions for dictatorship, but were gradually disempowered after the establishment of the authoritarian state. It was not primarily the Heimwehr movement that turned the authoritarian constitution into a government program, but the Christian Social Leadership [...] Only by determining the balance of power between the fascist Heimwehr movement and the traditional bourgeois forces does the successive political and military disempowerment of the Heimwehr [ ...] understandable.

From State Secretary to Vice Chancellor

From October 17, 1932, Fey von Dollfuss ( Cabinet I ) was entrusted with the office of State Secretary for Security (the Ministry of the Interior was formally headed by the Chancellor himself, while Franz Bachinger was Federal Minister for internal administration ). He banned all gatherings and marches of the Social Democrats , Communists and National Socialists .

On March 15, 1933, members of the Social Democrats and the Greater Germans tried to continue the session of the National Council , which had ended on March 4 without a presidency . On that day, Fey put together home security units in the center of Vienna. At best, they were supposed to help support Engelbert Dollfuss ' legal coup d'état , which allowed the parliament to be demolished by the police in order to prevent the National Council meeting. But they were not used. In the Council of Ministers on March 17, Fey stated that the Heimwehr, about which coup rumors circulated, should only have provided support to the state security forces in the event of a general strike. Fey was particularly angry that the Vienna Police President Franz Brandl , a Greater German, had the home guard units on Judenplatz watched by the security guard's alarm department ; Brandl justified this with rumors of the coup, but was immediately forced into retirement by Dollfuss.

On May 10, 1933, Fey was raised to the rank of Federal Minister - still entrusted with the same portfolio - by Dollfuss , and on September 21, Vice Chancellor . He called for more radical action against the Social Democrats and the replacement of the state governments by government commissioners.

He had the Federal Government specifically searched for weapons stores belonging to the Republican Protection Association, which was forbidden by the Federal Government under the War Economics Enabling Act , searched the houses of Social Democratic politicians and arrested leaders of the Protection Association in early February 1934. His saying at a Heimwehr event on February 11, 1934 in Langenzersdorf is well known : "We will go to work tomorrow and we will do a great job!" A search of the Social Democrats' party home in Linz for weapons by the police against which the Put up the defense of Linzer Schutzbündler under their leader Richard Bernaschek , triggered a brief civil war the next day, the February fighting in 1934 .

Loss of power in stages

Feys powerful position on May 1, 1934 the official founding of the corporatist authored "Federal State of Austria," severely curtailed when he had to cede the post of Vice-Chancellor to his rival Starhemberg, now and in the Fatherland Front as Dollfuss deputy and leader of the "VF-Wehrfront" acted.

On July 11, 1934, in the course of another government reshuffle (Dollfuss already distrusted him), he also lost the security department and remained merely a minister without a portfolio. Although he had received the pompous title of State Commissioner General for Extraordinary Security Measures to Combat Subversive Endeavors , this could not hide the fact that Fey had been largely disempowered politically.

Chancellor Dollfuss took over the management of the security system himself, and he appointed State Secretary Carl Karwinsky to run the business . From then on, the ambitious Fey had a very distant relationship with both of them. His disempowerment brought him even closer to the National Socialists, with whom he had previously maintained contacts. With them, Fey undoubtedly also shared an interest in weakening Dollfuss' position, which is why he offered them close cooperation as an intermediary through the Vienna Vice Mayor.

During the National Socialist coup attempt on July 25, 1934, he and Engelbert Dollfuss were detained in the Federal Chancellery. To what extent he collaborated with the putschists is still unclear. In any case, the government accused him of having disclosed his knowledge of the impending attack on the Federal Chancellery far too late. "Obviously he wanted to buy time to be the hero of the hour by mobilizing homeland security".

But since there was no interest in admitting the possible involvement of a member of the government in the Nazi coup, Fey was settled "behind the scenes". His shady role during the coup was hushed up and he was a member of the cabinet of the new Chancellor Kurt Schuschnigg from July 30, 1934 to October 17, 1935 . On the occasion of his resignation from the government he was awarded the Grand Cross 1st Class of the Austrian Order of Merit . Vice-chancellor and security minister became his rival Starhemberg, who pushed for his dismissal from the government, but also had to leave the cabinet on May 16, 1936.

Fey was resigned on November 7, 1935 with the post of chairman of the board of directors of the Donaudampfschifffahrtsgesellschaft (DDSG). In October 1936 the Heimwehr was dissolved by the government because it stood in the way of the intended “pacification” with the “nationalists”.

The statement that Fey was also Vice President of the Austrian Federation of Industrialists is incorrect.

After the invasion of the Nazis Fey was from the on 15 March 1938 Gestapo interrogated. From this questioning he came home in the afternoon, visibly worn out, which was also noticed by several former war comrades who visited him towards evening. Fey feared the loss of his post at the DDSG and the resulting lack of funds as well as a possible Nazi show trial . Fey asked his sister, who happened to be present, to see that his 20-year-old son Herbert, a student at the Wiener Neustadt Military Academy, would come to him. He also sent a letter to Edmund Glaise-Horstenau for help , but did not wait for his answer. After he had written two farewell letters and his last visitor, Louis Walterskirchen, had left Fey's apartment (3rd district, Reisnerstrasse 21) around two in the morning, he killed his wife and then himself in the early morning hours of March 16, 1938 . The police investigation revealed that Fey first killed his 46-year-old wife Malvine with two shots, then he fired once at his son Herbert, who had previously shot himself in the mouth. Most recently, the former Vice Chancellor killed himself with a shot in the temple.

Interior Minister of the Republic of Austria

Chancellery Minister of the Republic of Austria