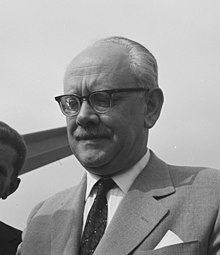 Fritz Bock (born February 26, 1911 in Vienna ; † December 12, 1993 ibid) was an Austrian politician and co-founder of the ÖVP . As Austria's longest serving Minister of Commerce , he was most recently Vice Chancellor.

Fritz Bock lived with his parents (his father, who was also called Fritz Bock, was head of the post office) at Einwanggasse 14 in Penzing , which until 1938 belonged to Vienna's 13th district (exactly opposite, at number 19, Erika grew up five years older Mitterer , later author, on). In 1930 Bock graduated from the Fichtnergasse grammar school in Vienna- Hietzing , where he was involved in the Catholic middle school movement. He was then a member of the Catholic Students' Union at the University of Vienna , where he studied law until he was awarded a doctorate in 1935. jur. PhD. He also trained as a sworn auditor and tax advisor.

During the dictatorship of Kurt Schuschnigg , Fritz Bock was responsible for anti-Nazi propaganda as the propaganda manager ( Deputy Federal Head of Advertising ) of the Fatherland Front . Until March 1938 he was heavily involved in the organization of the referendum on the preservation of Austrian independence, which was prevented by the invasion of the Wehrmacht . After the so-called “Anschluss” of Austria, Bock was arrested on March 15, 1938 and was taken to the Dachau concentration camp at the beginning of April on the first Austrian transport, the so-called Prominent Transport . However, he was released in 1939 for incapacity for prison.

During the Second World War he was classified as unworthy of defense, was banned from his profession and was under constant surveillance by the Gestapo . Nevertheless he managed to establish contacts with the Austrian resistance movement O5 . Shortly before the end of the war, he escaped being arrested again by fleeing to the Upper Austrian Innviertel , which was liberated shortly afterwards by the US Army.

After the war, Fritz Bock was one of the founders of the Austrian People's Party (ÖVP) in 1945, was Secretary General of the Austrian Workers' Association (ÖAAB), member of the Presidium of the Federal Association of Austrian Resistance Fighters and Victim of Fascism (1946–1948), General Councilor of the National Bank (1948–1953) and from 1949 member of the National Council . On January 23, 1952, he was promoted to State Secretary in the Federal Ministry for Trade and Reconstruction in the Figl II government , remained in this post in the Figl III and Raab I cabinets, but changed from summer 1955 to summer 1956 as State Secretary in the Ministry of Finance .

After differences with Federal Chancellor Josef Klaus , he resigned from the sole government of the ÖVP in 1968 and became Chairman of the Supervisory Board of Creditanstalt (1969–1989). He was President of the Danube European Institute , the Federal Conference of Liberal Professions and the Organization for International Economic Relations as well as Vice-President of the Documentation Archive of the Austrian Resistance (DÖW) .

Fritz Bock was invested in the Order of the Knights of the Holy Sepulcher in Jerusalem in Salzburg in 1955 . He was the founder and, from 1955 to 1960, head commander of the commandery in Vienna, Lower Austria and Burgenland.

Bock was an original member of the K.Ö.HV Nordgau Wien and an honorary member of the Catholic student association K.Ö.HV Mercuria Wien in the ÖCV .

Minister of Economic Affairs of the Republic of Austria