Adolf Schärf (born April 20, 1890 in Nikolsburg , South Moravia , † February 28, 1965 in Vienna ) was an Austrian politician and statesman ( SPÖ ) and from 1957 until his death in 1965 President of the Republic of Austria. He was the third Federal President of the Second Republic , established in 1945 and becoming sovereign in 1955 , and the first to be re-elected after a six-year term in office. 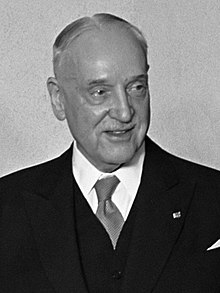 Adolf Schärf, son of a poor working-class family, lived in Vienna from March 1899, where his parents had found employment as a glass bead blower. His father Josef Schärf was a trained stock turner from Vienna with German-Bohemian ancestors and his mother Magdalena Sitek was a farmer's daughter from Guttenfeld , a German-Croatian village near Nikolsburg. After the Hernalser Gymnasium Geblergasse , which he had attended from 1901, and after studying at the University of Vienna , which he financed through work and grants, he received his doctorate in law four weeks before the outbreak of war. In the same year he joined the Austro-Hungarian army as a volunteer . In 1915 he married the Styrian Hilda Hammer , with whom he had two children, Reinhold and Martha . At the end of the war, Schärf was a lieutenant in the reserve.

On March 4, 1933, Schärf had the task of conveying the urgent advice of Karl Seitz and Otto Bauer to Renner during the (as it turned out) last National Council meeting of the First Republic that Renner should resign as President of the National Council immediately. Renner followed this fatal advice, the second and the third president did the same, which, in the opinion of Chancellor Engelbert Dollfuss the self-dissolution of parliament was effected.

After the attempt by the Social Democrats and Greater Germans to make the National Council functional again, the February uprising in 1934 , the ban on Social Democracy and the establishment of the corporate state dictatorship by Engelbert Dollfuss , Schärf was imprisoned from February to May 1934; he was suspended as a parliamentarian and retired at the end of 1934. He then worked as a trainee lawyer in his brother Josef Schärf's office and passed the bar exam in 1935 in order to be able to set up his own law firm; from 1936 to 1945 he worked as a lawyer.

After the " Anschluss of Austria " to the German Reich on March 12/13, 1938, he was arrested by the Gestapo and spent twelve days in police custody. Three months later he took over the apartment and law firm of the Jewish lawyer Arnold Eisler : The latter, like Schärf, a social democratic politician before 1934, offered him his apartment in Vienna 8th, Skodagasse 1, before he fled, and proposed him to the bar association for the continuation of his files in front. Subsequent allegations, according to which Schärf had Eisler's property " Aryanized ", could not be verified. Schärf also managed by a legal trick not to become a member of the Nazi legal guardian association. Schärf lived in the apartment in Skodagasse until his death.

In 1943 Schärf was visited by the German Social Democrat Wilhelm Leuschner in Vienna and contacted about the prospect of a possible cooperation "after Hitler ". But he spontaneously refused to consider whether Austria would remain in the constitutional association of the German Reich after the war: The Anschluss is dead. The Austrians' love for the German Reich has been driven out. Only after this conversation did Schärf's position become in discussions with Karl Renner , Karl Seitz and others on the attitude of the banned party.

Schärf had connections to resistance circles, such as the resistance group around chaplain Heinrich Maier , and was in political custody after the assassination attempt on Hitler on July 20, 1944 - as in 1934 and 1938; it lasted five weeks. His son Reinhold was drafted into the Wehrmacht and died in Russia.

From April 12-14, 1945, immediately after the Battle of Vienna , Schärf was involved in the founding of the Socialist Party SPÖ through the union of Social Democrats and revolutionary socialists in the Red Salon of the Vienna City Hall and was appointed provisional chairman. The nominal party chairman was initially the seriously ill Karl Seitz , who had not yet returned to Vienna from concentration camp detention , and who had been the first republican head of state in 1919/1920 and mayor and governor of Vienna until 1934.

On April 27, 1945, Schärf was therefore a co-signatory of the Austrian Declaration of Independence for the Social Democrats . On the same day he became, like Leopold Figl (ÖVP) and Johann Koplenig (KPÖ), political state secretary - this corresponded to the rank of minister - of the provisional state government of Karl Renner (SPÖ). Renner, Figl, Schärf and Koplenig formed the so-called Political Cabinet Council, until the federal presidential election on December 20, 1945, the provisional highest instance of the re-emerging republic.

He was anything but a tribune of the people and always led a modest and withdrawn life. The return of the Nazis plundered Jewish property or the compensation for Jewish Austrians he measured his legal training in defiance with no special meaning. He was also reserved about the return of Jewish party officials from exile.

Schärf's ambivalent attitude towards the return of social democratic exiles of Jewish origin is evident in Josef Hindels ' memoirs , in which he accused Schärf of advocating the return of Bruno Kreisky but at the same time rejecting the return of other emigrants in general and a large number of Jewish emigrants in particular . This was formulated more clearly by the union official Friedl Schorsch , who returned from the USA in 1946, who portrayed Schärf and Oskar Helmer as the party's driving anti-Semites after the war. In contrast to Helmer's motives, Schärf's motives are not clearly identifiable: On the one hand, Schärf saw the Jewish population in the First Republic overrepresented in the leadership of the social democracy, which the party in the Christian-social and German-national propaganda on the "Jewish party" and the Jewish colleagues for "Burden" made. On the other hand, he always claimed that he had never been an anti-Semite.

He vigorously opposed any attempt at even a selective cooperation with the Communists and had alleged “Popular Front” sympathizers severely reprimanded. At the same time, in the sense of weakening the bourgeois camp, he discreetly promoted the formation of the VdU as a reservoir for former National Socialists (later FPÖ), but this calculation did not work because the SPÖ lost even more votes to the new grouping than the ÖVP in the National Council election in 1949 .

In the National Council elections in 1953 , the SPÖ emerged as the party with the strongest vote under Schärf's leadership, but received fewer mandates than the ÖVP due to the current electoral law. In April 1955 Vice Chancellor Schärf took part in the successful negotiations in Moscow on the Austrian State Treaty with Federal Chancellor Julius Raab , Foreign Minister Leopold Figl and Foreign Office State Secretary Bruno Kreisky and had the greatest reservations about a binding promise of neutrality requested by the Soviet leadership. From December 28, 1954 to January 17, 1955, he was also temporarily Minister of Justice until Hans Kapfer took up this post.

1964 in Cologne, second from the right

After the death of Federal President Theodor Körner on January 4, 1957, Schärf prevailed as an SPÖ presidential candidate against the leader of the right wing, Interior Minister Oskar Helmer . In his presidential election campaign the “whispering slogan” supposedly circulated: Anyone who has already been for Adolf will vote for Adolf again this year to address the former NSDAP members in the country. However, there were no posters or leaflets with such a text. The news magazine profil wrote in 2003: "Of course, contemporary history researchers have never been able to provide evidence for this rumor."

Schärf won the election on May 5, 1957 by just over 100,000 votes ahead of the joint candidate of the ÖVP and FPÖ, Wolfgang Denk , and took up his new office on May 22, 1957 on the occasion of his inauguration by the Federal Assembly. When he was re-elected , he received the largest majority of votes in federal presidential elections to date, with 55.4 percent. Opposing candidates were the former Chancellor Julius Raab (ÖVP) and the retired gendarmerie general Josef Kimmel, who was appointed by the small European Federalist Party .

The foreign policy highlight of his presidency in 1961 was the Vienna summit meeting of US President John F. Kennedy and Soviet party and government leader Nikita Khrushchev , an occasion at which he played the role of host in front of the entire world. Since Schärf was widowed (his wife Hilda died in 1956), his daughter, the doctor and former actress Martha Kyrle , stood by his side as "First Lady" in the performance of representative duties. He made a number of state visits abroad, for example to the Soviet Union .

Sharp was respected by all parties to exercise the presidency impartially. He was a staunch supporter of the grand coalition, of which he was one of the architects, and knew how to exercise the full authority of his office over three ÖVP chancellors (Julius Raab, Alfons Gorbach , Josef Klaus ). As head of state he also lived in his private apartment in Vienna- Josefstadt , 8., Skodagasse 1, from which he could walk to his official residence in the Leopoldine wing of the Hofburg .

The longtime professional politician complained to his friends about the loneliness as the highest representative of the state, who was no longer part of daily politics. Nevertheless, he did not stop exercising his influence in the SPÖ, especially during the serious crisis that led to the disempowerment of the Interior Minister and former ÖGB boss Franz Olah in 1964 .

Schärf died on Sunday, February 28, 1965 in Vienna after a brief, very serious illness. The medical bulletin states that he died of poor circulation in a hepatic coma. Dr. Two weeks earlier (on February 16, 1965), already marked by the illness, Schärf had welcomed Shah Reza Pahlavi, who had come to Austria on a private visit, at the Vienna International Airport .

Julius Raab died in early 1964. Two months after Schärf, Leopold Figl died in early May 1965. On the tenth anniversary of the signing of the State Treaty, of the Austrian delegation that had negotiated in Moscow in 1955, only Bruno Kreisky was alive.

Adolf Schärf was buried in the presidential crypt of the Vienna Central Cemetery .

His monument is in the northern part of the Vienna City Hall Park ; the portrait head of Alfred Hrdlicka on a stele was unveiled by Martha Kyrle in 1985. In 1983 the Dr.-Adolf-Schärf-Platz was named at the Kagran underground station in the 22nd district of Vienna, which opened in 1982 ; also in the same year a municipal residential complex in Vienna's 16th district. A number of student residences , including one in Vienna 20th , Lorenz-Müller-Gasse 1, were also named after him. In the vicinity of Kaprun there was the Adolf-Schärf-Haus der Naturfreunde Österreich , which was demolished because it was dilapidated.

Federal party leader of the SPÖ