The title of this article is ambiguous. Further meanings are listed under Wiener Zeitung (explanation of terms ) .

The Wiener Zeitung was founded in 1703 as the Wiennerisches Diarium . The first edition appeared on August 8, 1703. This is the oldest daily newspaper in the world that is still published . The newspaper is 100 percent owned by the Republic of Austria .

The Wiennerisches Diarium began, like many other papers at the time , with national or international news, as well as news of birth, marriage and death from the nobility and court reports. Purely local news was still spread by criminals or drummers.

Extra sheet of the Wiener Zeitung of May 21, 1799 on the battle between Austrian and French troops in Switzerland 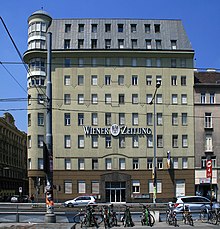 The spelling was later changed to Wienerisches Diarium . Since 1780 it has been called Wiener Zeitung , in 1812 it became an official government newspaper with the official gazette for Wiener Zeitung and since 1857 the Wiener Zeitung has been published by the public (editor: Joseph Carl Bernard ) and printed by the Austrian State Printing Office until 1997 . After the annexation of Austria , it could not be completely discontinued immediately due to the complicated publication regulations for the official gazette and was limited to the official part with the announcements, the stock exchange news and the official gazette until February 29, 1940. From March 1, 1940 to April 7, 1945 it was replaced by the Völkischer Beobachter - Vienna Edition . After the Second World War , the first edition appeared on September 21, 1945. The circulation increased from 4,500 (1855) to almost 24,000 copies today. She has had the WZ Online web edition since 1995. In 1998 the newspaper was spun off as a GmbH. The issues of the Wiener Zeitung from 1704 to 1939 can already be read to a large extent online in the Anno portal of the Austrian National Library .

The Wiener Zeitung is also the official publication organ of the Republic of Austria and contains an official gazette (“Official Gazette of the Wiener Zeitung”), in which, among other things, public service positions are advertised or changes to the company register are announced. From 1999 the Ministry of Justice began to publish on the Internet and since January 1, 2000, insolvencies have been published exclusively and legally binding on the Internet, but the Wiener Zeitung continues to print them voluntarily. Since the beginning of 2002, changes to the commercial register have been published both online in the edict file and in the official gazette. Over time, other areas were added and since January 1, 2005, almost all publications that are intended in court proceedings have been made in the edict file.

At the beginning of 2007, Wiener Zeitung GmbH put the value-added service firmenmonitor.at into operation. This service can be used to subscribe to information about changes of address, changes in the commercial register, bankruptcies, new registrations and the like of companies.

As a wholly owned subsidiary, auftrag.at tender service GmbH is also part of Wiener Zeitung GmbH. This is a tender platform for public clients and potential bidders. Since May 2010 it has been possible to create and submit offers electronically using an extension in the application.

The Wiener Zeitung is a cooperative of Austria Press Agency .

Editors of the sheet were 1983-2000 Heinz Fahnler , from 2000 to 30 April 2005 Peter Bochskanl , from May 2005 to October 2009 Andreas Unterberger , who previously the editor of the Press had directed, and from November 2009 to October 2017 Reinhard Göweil previously Economic department head of the daily newspaper Kurier . After Göweil was confronted with allegations of sexual harassment of a journalist, he was released on October 20, 2017.

In September 2009 the Wiener Zeitung took over the editorial management of HELP.gv.at , the authorities information portal of the Republic of Austria. HELP.gv.at provides information on official channels on 170 life situations such as pregnancy, marriage or driving licenses. The platform provides cross-agency and neutral information about official channels, answers citizens' inquiries or forwards them to the responsible office or links to (online) forms.

Since January 1, 2010, Wiener Zeitung has also been responsible for the editorial content of the Unternehmensserviceportal (USP) on behalf of the Republic . As a “one-stop-shop portal”, USP offers useful information on company-relevant topics and serves as a service portal for entrepreneurs who can deal with their official channels there.

Since January 1, 2016, there will also be articles in plain language in loose order .

Since the beginning, the paper has appeared twice a week, on Wednesdays and Saturdays. From October 1812 it appeared three times a week, on Tuesdays, Thursdays and Saturdays. Since October 1, 1813, the frequency was daily. On March 21, 1848, the evening edition was introduced “in order to keep pace with the current momentous moment with the rapid flow of events.” From August 1, 1848, the Wiener Zeitung appears in the morning from Tuesday to Sunday and the evening edition from Monday to Saturday.

After the evening edition had ceased, the Wiener Zeitung appeared from January 2, 1922 to April 10, 1925 Monday to Saturday evenings. From April 12th it appeared again Tuesday through Sunday morning. From July 3, 1933, the WZ also appeared on Mondays at 1 p.m. and thus again on a seven-day basis. Since it only brought official news from 1938 onwards, it is possible that the frequency of publication was restricted again.

From 2012 to 2014 the Wiener Zeitung operated the WienWiki , whose aim was to create an encyclopedia especially for topics from Vienna. In April 2014 the editing function was switched off "for economic reasons" and it is still operated statically.