The Kurier is a national Austrian daily newspaper ; it is classified as politically liberal.

In occupied post-war Austria , the Allies determined Austria's media landscape. The Wiener Kurier , which appeared for the first time on August 27, 1945, was founded by the US occupation forces ( see also: Army Group Press ). The newspaper was unusually colorful and is therefore Austria's first tabloid . It appeared with an initial print run of 153,200 copies and was able to establish itself in the initial phase with its American editor-in-chief , the press officer Colonel Albert W. Reid . The purpose of the Viennese courier at the time was, among other things, to transport American propaganda messages .

At the beginning of 1946 the Wiener Kurier was the most widely read newspaper in the country with an average circulation of 300,000 copies per day. On October 1 of the same year, the newspaper posted a record circulation of 445,000 copies because it reported luridly and in bar letters about the judgments in the Nuremberg trials . When the Wiener Kurier was unable to appear on September 26, 1947, hundreds of readers shared their regrets over the phone, including the Federal Chancellor, the Interior Minister , the Trade Minister and Vienna's Chief of Police. The reason for not showing up was that there wasn't enough paper. 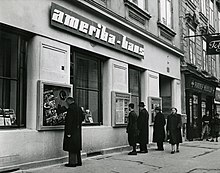 Due to the rapidly increasing circulation, the US newspaper had to accept losses in both the circulation and the size of the paper. The circulation fell from 300,000 copies per day to around 130,000 copies per day in June 1950, while the price of rotary paper almost quintupled between 1946 and 1951. The dominant position of the Viennese courier decreased as a result, and there were also heavy losses in public favor.

The Kurier now had a direct competitor because of the establishment of the tabloid Bild-Telegraf by three Austrian media makers .

Preparations were made to discontinue the Wiener Kurier , the newspaper stagnated with a circulation of 60,000 copies. Ludwig Polsterer , operator of the film company Cosmopol , who was previously not represented in the newspaper business , expressed interest in the Wiener Kurier . Through the mediation of the director of the theater in der Josefstadt , Ernst Haeusserman , the Americans were dissuaded from their plan to shut down the newspaper entirely. Other interested parties besides Ludwig Polsterer were the publisher of the popular Viennese weekly edition , Franz Karmel , and Fritz Molden , head of the liberal press , who later became an opponent of Polsterer.

Shortly before the contract was signed, the ÖVP sub-organization, the Austrian Workers 'and Employees' Association ( ÖAAB) , announced that it would no longer print the newspaper if it were not accepted as a partner under the guise of a joint tenancy. Thereupon Fritz Molden got out as an interested party, the ÖAAB got in with Alfred Maleta . And for a three million Schilling deposit for printing costs, Ludwig Polsterer received 50 percent of the shares.

The Neue Kurier first appeared on October 18, 1954. Hans Dichand , until then editor-in-chief of the Kleine Zeitung in Graz, was employed by the Neuer Kurier . At the time, the newspaper had well-known authors, some of whom were still active in journalism for decades: Reinald Hübl , Jörg Mauthe , Heribert Meisel , Friedrich Torberg and Dichand's friend Hugo Portisch , who had been lured away from New York City , were responsible for the success of the paper on a journalistic level.

The "courier" in the "Vienna newspaper war"

In 1958, Polsterer settled its co-owners financially and was thus officially the sole owner. The ÖVP Federal Councilor Leopold Helbich was also involved as a partner . When Fritz Molden, in whose print shop the Kurier competitor Bild-Telegraf was printed and finally filed for bankruptcy, published his own tabloid, the Bildtelegram, with the previous editorial team of Bild- Telegram , Polsterer took over, with the help of state party chairman Fritz Polcar and again with funds from ÖVP, the picture telegraph . By July 23, 1958, the Kurier editorial team had produced two newspapers.

In 1958 Hans Dichand left the courier and Hugo Portisch became editor-in-chief. In 1973, Polsterer sold the courier to a group of industrialists associated with the Austrian banking company Raiffeisen. The noon edition of the newspaper was discontinued.

From 1982 onwards, metal typesetting was switched to photo typesetting. The first newspaper produced in this way appeared on September 20, 1983. It was also printed for the first time in the new printing center in Inzersdorf. The Kurier was published in color again with web offset printing .

In 1984 an editorial system project group was formed to prepare the switch to electronic production. At the beginning of 1986 Günther Wessig took over the editor-in-chief. The new alfa editorial system was installed on August 31, 1987 under his leadership. It was not until July 1988 that the newspaper was produced entirely electronically.

In 1988 Kronen Zeitung and Kurier founded a joint production and sales subsidiary, Mediaprint, with the participation of the Westdeutsche Allgemeine Zeitung (WAZ) . On September 1, 1988, Franz Ferdinand Wolf became editor-in-chief. Under him, the Saturday supplement Kurier-Freizeit was introduced and the Sunday courier was redesigned.

Under publisher and editor-in-chief Peter Rabl (since March 22, 1993), the courier was given a new look and a new logo in October 1993. At the end of February 2001, the courier layout was revised again.

On November 1, 2003, Christoph Kotanko, head of the domestic affairs department for many years, took over as managing editor-in-chief. At the end of September 2005, Peter Rabl resigned from his positions after many years as publisher and editor-in-chief. The new editor-in-chief was Christoph Kotanko. "Kurier Zeitungsverlag GmbH" has been the publisher since then. A model is thus practiced, which other daily newspapers such as the Kleine Zeitung or the Tiroler Tageszeitung also use. On April 26, 2010 it was announced that Helmut Brandstätter would be Kotanko's successor as editor-in-chief of the daily newspaper Kurier from August . He took over this role on August 1, 2010 and has also been editor of the Kurier since 2013 . In November 2013 the courier layout was relaunched.

With the full entry into force of the Federal Act on Equal Opportunities for People with Disabilities (BGStG) on January 1, 2016, the courier also offers messages in plain language .

At the beginning of September 2018, Martina Salomon was appointed by the Supervisory Board as the new editor-in-chief of the daily newspaper Kurier from October 1, 2018. In July 2019, Brandstätter left the courier at his own request .

With kurier.at , the newspaper published a website in 1996, which is part of its own company “Telekurier Online Medien GmbH. & Co. KG ”was outsourced. Kurier.at offers current information, news, entertainment and comments.

The majority owner with 50.56% is the Printmedien Beteiligungsgesellschaft on behalf of the Raiffeisen Zentralbank and 49.44% is the WAZ Auslands Holding GmbH, a subsidiary of the Funke Mediengruppe , in which the Austrian Signa Holding of the Tyrolean René Benko has a 49% stake since November 2018 is. Signa's share of the courier is therefore 24.2%.

The courier is cooperative members of the Austria Press Agency . The Kurier publishing group has also been involved in the news group since 2001 .