from Wikipedia, the free encyclopedia
This is the spotted version , flagged on July 5, 2020 . There are 3 pending changes that have yet to be viewed. 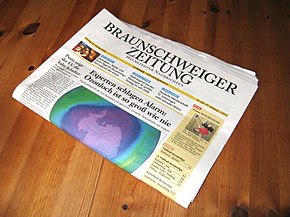 The Braunschweiger Zeitung , edition of October 21, 2006

The Braunschweiger Zeitung is a regional daily newspaper that appears in Braunschweig and is also distributed under other titles in eastern Lower Saxony . It is being relocated to BZV Medienhaus GmbH, which was Braunschweiger Zeitungsverlag GmbH and Co. KG until February 1, 2013 and has belonged to the Funke Mediengruppe (then WAZ Group) since the end of January 2007 .

The Braunschweiger Zeitung appears Monday through Saturday mornings in the Berlin format and is the only local newspaper in Braunschweiger (see Ein- Zeitung -Kreis ). The sold circulation is 93,374 copies, a decrease of 43.3 percent since 1998.

Issue dated May 22, 1948. Under the title: Published under License No. 2 of the Military Government 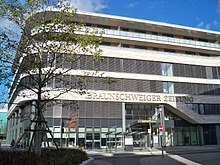 In the beginning the Braunschweiger Zeitung appeared only twice a week due to the prevailing paper shortage, from November 1947 three times a week and since September 1949 daily. Until June 1981 the Braunschweiger Zeitung was printed on the hat filter in the city center of Braunschweig. Until October 2014, all departments including the new Braunschweiger were located in the press house at Hamburger Straße 277 in the north of Braunschweig; the former press building was converted into the Burgpassage shopping center . In the city center there was still a BZ branch at the Packhof until the end of 2014 (now in the BZV Medienhaus, Hintern Brüdern 23, on the ground floor), and the BZ concert box office in the Schloss-Arkaden . The new print shop on Hansestraße in the north of Braunschweig has been in operation since February 2013. The new BZV Medienhaus GmbH publishing building, which was moved into on October 20, 2014, was built on the property of the former “public library” between Langen Strasse and Hintern Brüdern in downtown Braunschweig, which was demolished at the end of 2010 . With the move to the city center, the demolition of the printing and canteen buildings as well as the glass connecting corridor began on Hamburger Strasse.

The Braunschweiger Zeitungsverlag has been part of the WAZ Group, today Funke Mediengruppe , since the end of January 2007 , after all the shareholders, mainly the Voigt family from Hamburg, had sold their shares. With the 25 percent of Norddeutsche Landesbank not yet transferred , the total purchase price is estimated at 210 million euros. In 2008 the newspaper received the " Local Journalist Prize " from the Konrad Adenauer Foundation .

Andreas Duncker published a weekly newspaper in Braunschweig as early as the 17th century. It existed under changing titles until 1785.

From 1848–1866, the Deutsche Reichs-Zeitung of the publisher Eduard Vieweg appeared in Braunschweig, which was preceded by the German national newspaper from Braunschweig and Hanover from 1831 to 1840 .

The Braunschweiger Tageblatt was published from 1865–1897 .

The Braunschweiger Zeitung has lost a lot of its circulation in recent years . The number of copies sold has fallen by an average of 3.4% per year over the past 10 years. Last year it decreased by 4.3%. It is currently 93,374 copies. The share of subscriptions in the circulation sold is 90.6 percent.

Local editions of the Braunschweiger Zeitung

The Goslarsche newspaper in Goslar takes over the mantle of the Braunschweiger Zeitung , but produces its own local section and is a separate company that belongs to the publisher Krause media house.

The title of this newspaper supplement refers to the postal code valid in and around Braunschweig .

The publisher is also increasingly involved in digital media. The most important activities are the eight news portals of the daily newspaper titles of the BZV Medienhaus such as u. a. braunschweiger-zeitung.de, wolfsburger-nachrichten.de, salzgitter-zeitung.de or harzkurier.de. In July 2014, the BZV Medienhaus was one of the first publishers in Germany to introduce a hard paywall .

The e-paper edition of the daily newspaper has also been available as an app for Android and iOS since mid-December 2012 . At the same time, BZV Medienhaus GmbH was one of the first large regional newspaper publishers in Germany to introduce a metered freemium paywall for their news portals. Since then, users have been able to use 15 articles a month free of charge; Any further use was subject to a charge. On July 1, 2014, the BZV Medienhaus was one of the first publishers in Germany to introduce a hard paywall . The BZV is the first major publisher to take this step. Since then, the number of free articles has been limited to zero, with the exception of reader and party photo series as well as certain video contributions and agency news. For users, the publisher now offered daily, weekly and monthly passes. Subscribers to the print edition and the e-paper also had to pay to use the content. At the same time, the publisher introduced a mobile version of its pages. A reduced mobile version “mplus” was also introduced for subscribers, in which the first four current articles of each section were freely available. The "mplus" offer was terminated in autumn 2016. On July 1, 2017, the publisher changed the digital offers and now offers the TagesPass and the digital offer (also in combination with the printed daily newspaper).

According to IVW , the total reach of BZV Medienhaus GmbH's digital activities was around 0.93 million visits and over 3.5 million page impressions in May 2015. AGOF had a reach of 410,000 unique users (average per month from January 2014 to March 2015) out.

Since moving to the new publishing house in Braunschweig city center, BZV Medienhaus GmbH has been operating a NewsWall at its own building on the corner of Lange Straße and Güldenstraße , an LCD area of ​​over 22 m² that displays both the editorial content of the publisher's own portals and advertising space. In February 2017 , a 12 m² NewsWall was installed in the city center of Wolfsburg . Another NewsWall is available in Gifhorn.

Complaints to the press council

So far there has been one complaint, three disapprovals and a reference by the German Press Council against the Braunschweiger Zeitung.

In 2005 the newspaper was reprimanded because it had repeatedly spoken of a "reconstruction and a copy of the castle" in connection with the rebuilding of the Braunschweig Castle . In this context, there were also two disapprovals by the Press Council in 2004.

Another disapproval occurred in 2010 in connection with the expansion of the Braunschweig airport , when an article gave the impression that it came from the airport operating company.

For its reporting on the Braunschweig Christmas market in 2016, the BZ received a tip from the German Press Council in 2017 because the reporting had wrongly given the impression that the Christmas market was operated exclusively with natural electricity.