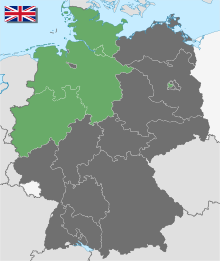 British zone of occupation and British sector of Berlin from June 8, 1947

The British zone of occupation (or northwest zone ) was one of the four zones of occupation into which Germany, west of the Oder-Neisse line , was divided by the victorious Allied powers on the basis of the law of occupation after the surrender in May 1945 .

The British occupation zone included the Prussian provinces of Hanover , Schleswig-Holstein and Westphalia , the north of the Rhine province (" North Rhine ") and the states of Braunschweig , Hamburg , Lippe , Oldenburg and Schaumburg-Lippe of the German Empire when the occupation sovereignty was assumed . The Free Hanseatic City of Bremen , consisting of the cities of Bremen and Bremerhaven, initially also belonged to the British zone, but was added to the American zone of occupation as an exclave in 1947 .

A part of Berlin was also under British occupation due to its four-power status .

Army units from other nations were also stationed within the British occupation zone. B. Polish units in Emsland (until 1948), the Norwegian Germany Brigade west of the Harz Mountains and later in Schleswig-Holstein (1947 to 1953) and Belgian armed forces in North Rhine-Westphalia (until 2002). Another special feature was the Bonn enclave . It was created as an unoccupied area in July 1949 and was under the Allied High Commission .

The seat of the military government ( Control Commission for Germany / British Element ) was initially Bad Oeynhausen with further bases in Münster , Düsseldorf , Kiel and Hanover . The plan to move to Hamburg - where the Grindel skyscrapers were built for this purpose from 1946 - was later dropped. The headquarters of the British Rhine Army was also in Bad Oeynhausen, and that of the British Air Force in Germany ( RAF Germany ) in Bad Eilsen until the two headquarters were merged in Rheindahlen in 1954 .

Meeting of the Zone Advisory Council on June 11, 1947 in Hamburg. At the front right, then Deputy Military Governor Sir Brian Robertson .

The military government was divided into specialist departments, each of which was subordinate to its own German administrations. A zone advisory council was formed in 1946 to consult with the German authorities in the provinces and federal states , which existed until the Federal Republic of Germany was constituted in 1949. 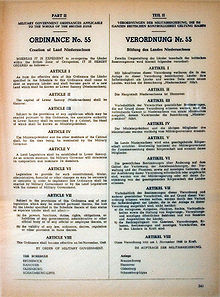 Ordinance No. 55, with which the British Military Government established the State of Lower Saxony on November 22, 1946, retroactively to November 1, 1946.

After the military government constitutionally the country on August 23, 1946 Schleswig-Holstein , Hannover , and " North Rhine / Westphalia " created from the Prussian provinces, Hanover was on November 1, 1946, the countries of Braunschweig , Oldenburg and Schaumburg-Lippe to the country Lower Saxony merged .

The state of North Rhine-Westphalia was initially formed from two Prussian provinces, namely the northern part of the Rhine province (" North Rhine ") and Westphalia. In January 1947, the previously independent state of Lippe joined the state of North Rhine-Westphalia. The formation of the countries in the British zone was thus completed. These countries became part of the Bizone on January 1, 1947 , then the Trizone and finally on May 23, 1949, the Federal Republic of Germany .

A coordinating function with the British government in London had until April 1947 John Hynd , after him Frank Pakenham .

The NWDR was set up in Hamburg as the sole broadcasting station.