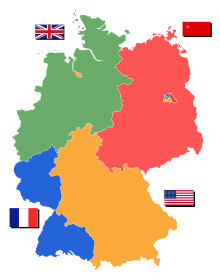 After the end of the Second World War and the occupation of western Germany , the three victorious Western powers agreed in London in March 1948 to convert the American and British occupation zones , which had previously been united into the bizone , with the French occupation zone to form the so-called trizone to merge. The Saarland , part of the French zone, was not included. Trizone is the unofficial name of the enlarged United Economic Area .

However, there was also talk of the western zone , jokingly of "Trizonesia" and later of western Germany .

In 1946/47 the American and British military governments created the economic council of the so-called bizone, a common democratic administrative structure for their two zones , which were united to form the united economic area. France with its zone of occupation in southwest Germany joined this measure only reluctantly in April 1949. The reason for the unification of the French zone with the Bizone was the need to create a unified German body in order to be able to use the Marshall Plan . In this way, the three western zones of occupation could be jointly included in the OEEC ( Organization for European Economic Co-operation ), which was supposed to implement the Marshall Plan in Europe.

In the United Economic Area, the three western occupying powers led on 20/21. June 1948 as the first important step through a currency reform ; the new coins were stamped Bank deutscher Länder . Three days later the Soviet occupation authorities ordered the implementation of their own currency reform in the Soviet zone and blocked the approaches to Berlin. The Berlin blockade began.

A Trizone in the constitutional sense by not arise. The term denotes the situation between March 6, 1948 and September 7, 1949 (constitution of the Bundestag and Bundesrat ), when France gave up its policy of delimitation towards the American and British zones and expanded the bizone to become a trizone on April 8, 1949 (based on the resolutions of the Washington Foreign Ministers Conference from April 5 to 8, 1949) and thus de facto the Trizone institutions became forerunners of the Federal Republic of Germany . Some historical sources mention August 1, 1948 as the date of the creation of the Trizone. Receipts are missing!

The occupation statute of April 10, 1949, which the three Western Allies used to exercise their civil rights of control and to monitor the future Federal Republic on their way to sovereignty on May 5, 1955 (→  Paris Treaties ), only came into effect on September 21, after the Establishment of the Federal Republic, in force.

However, the three western zones were already popularly known as "Trizonesia". In 1948 Karl Berbuer wrote the carnival hit We are the natives of Trizonesia , which at times also had to serve as a substitute for the German national anthem , for example in a stalker race in the Müngersdorfer Radrennbahn after a victory by the Cologne cyclist Jean Schorn .