The term West Germany can be understood both geographically and politically, but it is difficult to define the former. Today, it is especially by the former inner-German border defined that Germany into a western and an eastern German state said . 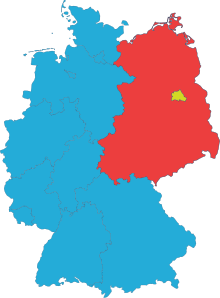 Politically, the term West Germany was only used from 1945 onwards, namely for the area of ​​the three western zones excluding West Berlin , i.e. the US , British and French zones of occupation (excluding Saarland ). From 1948 the area was also called Trizone . A year later, the Federal Republic of Germany was founded from 1949 to 1990 . The federal capital was Bonn , the largest cities were West Berlin and Hamburg . For the sake of simplicity, the Federal Republic of Germany often referred to other countries as West Germany from 1949 to 1990, or the term was used as a self-designation abroad, such as Made in West Germany or Made in Western Germany .

In this sense, the states of Schleswig-Holstein , Hamburg, Bremen and Lower Saxony , North Rhine-Westphalia , Hesse , Rhineland-Palatinate , Saarland and Baden-Württemberg as well as Bavaria in their political boundaries are meant by "West Germany". Baden , Württemberg-Baden and Württemberg-Hohenzollern merged in 1952 to form the state of Baden-Württemberg. In 1957, the Saarland (1945–1947 French Saar protectorate , then 1947–1956 autonomous , state-like entity sui generis ) joined the Federal Republic of Germany.

The GDR, which was dissolved in 1990 in the course of the Unification Treaty and German reunification , often spoke of West Germany until the end of the 1960s , since until then the GDR still assumed that the whole of Germany would be unified . Later, the official language in the GDR avoided the designation "West Germany" as a circumvention of the official name of the Federal Republic of Germany . As an interim solution, one could also hear “West German Federal Republic” or just “German Federal Republic”, next to the most frequently used but unofficial abbreviation “ BRD ”.

In today's parlance, West Germany is mostly synonymous with the so-called old federal states . At the same time, the original, geographically more narrowly defined meaning through names such as Westdeutscher Rundfunk (see below) or Westdeutsche Allgemeine Zeitung remained in the regional consciousness; a partially parallel phenomenon has been observed in the case of central Germany since reunification .

Geographically , West Germany consists of North Rhine-Westphalia, Hesse, Rhineland-Palatinate and Saarland. Hesse is sometimes also included in Central Germany . In the narrower sense, only the Rhineland part of North Rhine- Westphalia can be referred to as "West Germany". Exact boundaries, whether natural or political-historical, are seldom drawn. Based on the unity of the West Central German dialects (see below), especially before the Cold War, the greater Rhineland (from the Ruhr area to the Eifel ) was called "West Germany", especially with reference to the Rhenish-Westphalian industrial area.

West Germanic languages:
The West Central German dialects are designated with the digits 16 to 20.

Linguistically, the West Central German dialects form a region that distinguishes itself from the other German dialects . These boundaries were essentially shaped by the geographical separation of the population, which, compared to the hilly West Germany, form the Lower Rhine, Sauerland and Münsterland to the north , as well as the Rothaargebirge , to the east by the East Central German dialects through the Hohe Meissner and the Rhön , the Spessart and the Odenwald , south through the Hardtwald north of Karlsruhe and the border to France with remaining German-speaking Alsatians and Lorraine , the border to Luxembourg with German-speaking Luxembourgers and to Belgium north of the Ardennes with the German population group there .

The Westdeutsche Rundfunk Köln (WDR) goes back to the Westdeutsche Funkstunde founded in Münster in 1924 . Since its re-establishment, through the split of the Northwest German Broadcasting Corporation , it has been responsible as a public broadcaster exclusively for North Rhine-Westphalia; other broadcasting companies broadcast in the other West German states : The Südwestrundfunk (SWR) in Baden-Württemberg and Rhineland-Palatinate, the Hessian Broadcasting (HR) and the Saarländischer Rundfunk (SR).