Germany as a whole 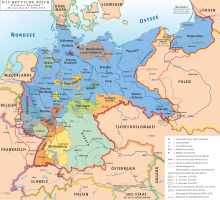 German Reich within the borders of December 31, 1937 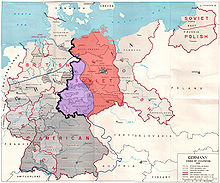 Occupied Germany (until 1955) according to the territorial status of 1937

As the whole of Germany was referred to in spite of the unconditional surrender in 1945 continuing, so far " Empire " general government mentioned that after the political merger of by the Potsdam Agreement and the East-West conflict divided Germany in the meantime resulting state partial orders (or institutions) in should replace a new all-German order.

Depending on the historical reference, the term describes either Germany with the inclusion of Austria (for example in the form of the German Confederation until 1866), Germany within the borders of 1937 (i.e. with the inclusion of the eastern territories of the German Empire ) or in summary the then Federal Republic of Germany , the GDR and Berlin .

With reference to ethnic and linguistic characteristics, the German-speaking parts of Europe or those who identify with Germany are also referred to as all-German . Correspondingly, the Viennese historian Heinrich von Srbik understood the term all-German as an alternative to both the small German , which was influenced by Prussia , and the greater German solution, which was influenced by Austria . Similarly, the early German national movement saw itself as all-German and was thus early in opposition to the particular interests of Prussia, Austria or the small German states.

The term is rarely used in the Federal Republic of Germany after reunification in 1990. Since then one speaks only of "Germany" or, if the aspect of unification is to be emphasized, of united or unified Germany.