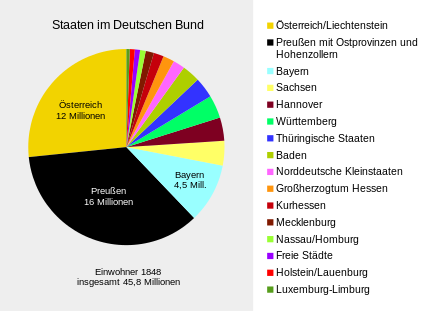 Inhabitants in the German Confederation in 1848, by individual states. A German federal state on this basis would have essentially corresponded to the so-called Greater German solution. Around a third of the population would have lived in Austria, Prussia and the other countries.

The model of a German nation-state under the inclusion and leadership of the Austrian Empire, discussed but rejected in the Frankfurt National Assembly of 1848, was described as the Greater German solution to the German question . It was in contrast to the small German solution that was finally adopted , which envisaged all members of the German Confederation , except Austria, under Prussian hegemony .

In the 20th century, the term Großdeutsch, originally used by national liberals and democrats, became a term used in battle against the Treaty of Versailles and the Treaty of Saint-Germain , which was mainly used by right-wing parties in Germany and German-Austria . Their goal was an empire that would encompass all areas with a predominantly German-speaking population, even against resistance from abroad such as Italy or France . The Nazis , however, strove for a imperialist solution to the German Question: Under the Nazi regime should one to be created "Greater Germanic Reich" for the permanent domination of the European helped continent and for the affected areas with "members not Germanic, mainly Slavic peoples" Germanized be .

The Greater German solution as part of the national movement 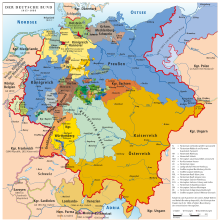 The word Großdeutsch was first used by the President of the Frankfurt National Assembly, Eduard von Simson . This Greater German movement was particularly widespread in the southern German states of Baden , Württemberg , Bavaria and Austria ; their supporters were mostly liberal to national liberal . In connection with the March Revolution in 1848 , it was understood to mean the establishment of a German nation -state, which was to include all German-speaking areas of the German Confederation , including the eastern provinces of Prussia, and for historical reasons ( Kingdom of Bohemia , Austrian crown lands Carniola and coastal land ) also areas in which Czechs and Slovenes made up the majority of the population. However, this idea could only have been realized politically through a division of the Austrian Empire, which was unthinkable without a simultaneous revolution by the Hungarians . The Austrian Prime Minister Felix zu Schwarzenberg therefore clearly rejected a Greater German solution as early as December 1848. On January 12, 1849, Hermann von Beckerath declared in the Frankfurt National Assembly : “Waiting for Austria is the death of German unity”. Thus and through the failure of the revolution that soon followed, the small German solution prevailed, which was founded in the hope of being able to enforce the nation-state as a constitutional monarchy via the King of Prussia by means of the emperor's deputation .

The Greater German solution of the Habsburgs

The German-speaking area around 1910

In 1863 Austria presented the Frankfurt Reform Act . The more federal constitution would have confirmed and strengthened Austria's leadership over the German Confederation and made it the leading state of a large German, monarchical, federal confederation in Central Europe.

If Austria and its allies Saxony , Bavaria , Baden , Württemberg , Hanover , Hessen-Darmstadt , Kurhessen and Nassau had triumphed in the German War in 1866 , another solution would probably have been possible.

The collapse of the Austro-Hungarian monarchy as a result of the First World War made it possible to unite the German-speaking areas of their Austrian half with the now republican German Empire ( Weimar Republic ). It was passed unanimously by the German-Austrian provisional national assembly on November 12, 1918.

However, this solution was prevented by the victorious powers of the world war, who also forbade Austria to call itself German Austria (→ Treaty of Saint-Germain ). Above all, the Greater German People's Party continued to pursue the merger with the German Reich in Austria in the interwar period , but also the Social Democrats (until 1933).

After Austria was " annexed " to Germany in March 1938, Adolf Hitler was celebrated as having achieved the greater German solution. In 1943 the official name of the German Reich was changed to Greater German Reich .

With the defeat of Nazi Germany, the victorious powers decided to restore Austria. Since 1945 the term “Großdeutsch” has been considered discredited due to its connection with National Socialist Germany . The idea of ​​" Germany as a whole ", which was represented by the Federal Republic of Germany and at times also by the GDR , corresponds today to the earlier small-German solution, renouncing the former East German territories .

In Austria, affiliation to Germany was no longer a politically relevant topic since 1945; the Moscow Declaration of the Allies of 1943, according to which Austria was “ Hitler's first victim” and should become independent again, fully corresponded to the mood of the population at the end of the war. In the State Treaty of 1955 the Anschluss (as in 1919 in the Treaty of St. Germain ) was forbidden. The overwhelming majority of the population has since consolidated their own Austrian national consciousness. A minority (ideological successors of the German liberals and German nationalists ) is still oriented towards Greater German in the classic sense.

In both Germany and Austria, the idea is usually associated with right-wing extremism or neo-Nazism , as it may a. is represented by right-wing extremist parties like the NPD . However, there is also a minority within the FPÖ and some smaller parties who pursue the original ideas of the Greater German solution of the 19th century. This minority advocates a union with Germany on the basis of the Basic Law , and therefore avoids the burdensome term “Anschluss”. In Germany, alongside right-wing extremist groups, there are also supporters of the Greater German solution among free-democratically-minded monarchists .

The existence of an independent Austrian nation is now generally accepted.

Wikisource: Speech at the opening of the National Assembly (Friedrich Ebert)  - sources and full texts