Beckerath came from a Mennonite weaver family that had lived in Krefeld in the 17th century . His father Peter was a ribbon weaver and later a bailiff . In 1815 Beckerath began an apprenticeship as a banker at the “ Bankhaus Gebrüder Molenaar ” founded three years earlier . There he was promoted to managing director in 1823 and partner in 1828. On December 16, 1835, he married Charlotte Heilmann, with whom he later had two children. In 1838 he started his own business as a banker under the company " von Beckerath-Heilmann " in Krefeld.

Politics in the pre-march

In 1836 Beckerath became a member of the Krefeld municipal council and became one of the leading Rhenish liberals . In 1844 he became a member of the Krefeld Chamber of Commerce , in 1846 its president. From 1843 to 1847 Beckerath was a member of the Rhenish Provincial Parliament as a representative of the third estate . In the Vormärz, he excelled with statements on customs and trade issues, the emancipation of the Jews and Rhenish law. He became known to the politically interested public through his contributions to the debate during the Rhenish provincial parliament of 1847. Beckerath vehemently supported Ludolf Camphausen's constitutional demand . Like the other representatives of Rhenish liberalism, Beckerath stood for a constitutional monarchy . In 1847 he wrote to his brother:

“ Whatever the case may be, I do not subscribe to absolutism ; As a subject, I will also obey an absolute monarch, as far as my conscience allows, but as a representative of the people I would betray the interests entrusted to me and my own convictions if I keep silent where the people's rights are clearly established in the law the fatherland is seen as a guarantee of its future, recognized as non-existent. "

From 1847 and 1848 Beckerath belonged to the Prussian First and Second United Landtag . There he supported Camphausen's attempt to find a compromise between the parliament and the government.

Beginning of the revolution and MP

When there was a citizens' meeting in Krefeld on March 5, at the beginning of the revolution of 1848, Beckerath was elected chairman. The assembly accepted a list of petitions, but overall it remained within constitutionalism. On March 2nd and 3rd, leading Rhenish liberals met Beckerath, Gustav Mevissen , David Hansemann and August von der Heydt in Cologne to discuss the next steps. The group decided to try to moderate the demands of the southern German liberals and to send delegates to the Heidelberg assembly for this purpose . At another meeting of the Rhenish Liberals in Bonn on March 11, 1848, the moderate direction around Camphausen and Beckerrath prevailed against somewhat more radical positions around Mevissen and Hansemann. A corresponding petition to Friedrich Wilhelm IV was essentially written by Beckerath. 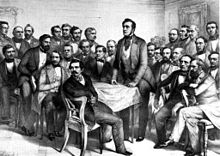 Part of the casino fraction

The demands of the group around Beckerrath and Camphausen for a census suffrage remained largely ineffective. The universal suffrage meant that only a few Rhenish liberal oppositionists from the Vormärz against the Catholic majority succeeded in entering the Frankfurt National Assembly . Beckerath was one of the exceptions after he had signaled concession to representatives of the Catholics in matters of religion. He was a member of parliament from May 18, 1848 to May 4, 1849. There he joined the casino faction (right center) that advocated a constitutional monarchy.

There he was, among other things, a member of the Constitutional Committee and special envoy in Berlin. Beckerath was considered a gifted speaker in the National Assembly. In the constitutional committee he was involved in the formulation of fundamental rights . At his suggestion, civil marriage was included in the constitution.

As early as the beginning of July 1848, Beckerath, as a representative of Prussia, was a promising candidate for a ministerial office in the provisional central authority . He refused and then initially acted as a mediator between parliament and the Prussian government. Pressed on all sides, he finally gave in and entered the Leiningen cabinet on August 9, 1848 as Reich Finance Minister . The main reason for his swing was that he wanted to strengthen the "Prussian element" in the government in order to demonstrate that the Prussians had not turned their backs on the revolution.

However, for Beckerath, even after joining the government, parliamentary work was in the foreground, as the finance minister had almost no room for maneuver in view of the lack of fixed income from the central government. Together with the Leiningen government, Beckerath resigned because of the conflict over the ratification of the armistice with Denmark in the Schleswig-Holstein War . As a result, Beckerath was the most promising candidate for the post of head of government in Frankfurt but also in Prussia. In Prussia he even presented his government program to the king, but was unable to win it over. Instead, he entered the government of Anton von Schmerling in Frankfurt and later remained finance minister under Heinrich von Gagern .

The unrest of September 18 pushed his political position further to the right. At times he even advocated violent crackdown on the Democrats. As a member of the government, Beckerath co-signed the Frankfurt Imperial Constitution . The emperor deputation did not belong to Becker Rath, as the executive in the absence of government officials feared her fall. After the rejection of the crown began to emerge, Beckerath traveled to Berlin in vain to ultimately convince Friedrich Wilhelm IV. When the failure of the small German solution became apparent, he resigned as minister and also resigned his seat on May 4, 1849. He explained this step to his father:

“ With the current state of affairs, it was inevitable to make a firm decision about the procedure to be paused and to decide whether or not to stick to the previous legal attitude, which, of course, could only have been passive, waiting want to tread the path of revolution. As you know me, you will not be in any doubt of my decision. "

Work after the revolution 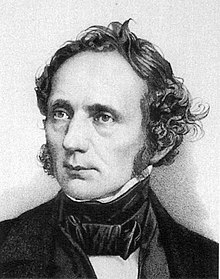 After the end of the National Assembly he took part in the Gotha post-parliament and was a member of the Erfurt Union Parliament in 1850 . Since 1849 he was a member of the second chamber of the Prussian state parliament . Together with Rudolf von Auerswald he was the main head of Auerswald-Beckerath . He took part in the negotiations on the revision of the constitution of 1848, without succeeding in pushing through liberal demands. Although he belonged to the House of Representatives (as the Chamber was now called) until 1852 , he largely withdrew in resignation. For Beckerath, his bank was now the focus of his activities. In 1858 he became a member of parliament again, but resigned from office a short time later for health reasons.

In 1862 Beckerath was again President of the Krefeld Chamber of Commerce. During the German Trade Convention of 1862 there were serious disputes between supporters of free trade and protective tariffs. This was not only due to economic but also political reasons. Protective tariff advocates like David Hansemann wanted to keep Austria the possibility of joining the German Customs Union . Beckerath prevailed with his free-trade and small-German stance and in the process also ousted Hansemann from the position of chairman, but resigned from this office only a year later.