This article covers the historic land. For the population, see Bohemia (population) . 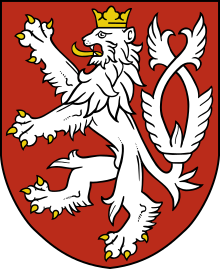 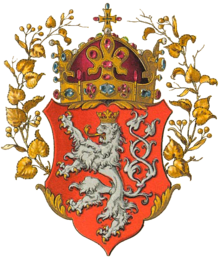 Bohemia ( Czech Čechy , Latin Bohemia ) was one of the countries of the Bohemian Crown . As the former Kingdom of Bohemia , it forms the territory of today's Czech Republic with Moravia and the Czech part of Silesia , but is no longer an independent administrative unit. The historical capital of Bohemia is Prague , since 1918 the capital of Czechoslovakia or the Czech Republic. The Czech patron saint is St. Wenceslas , to whom the Wenceslas crown is dedicated. AnotherThe country's patron saint is John of Nepomuk . The inhabitants are called Bohemia (plural of Böhme ) regardless of their nationality , but until the fall of the Habsburg monarchy, the Czech language was also referred to as "Bohemian".

Flag of Bohemia (from the 19th century)

The Bohemian lion is an erect silver, double-tailed lion with a golden crown of leaves on red. It is armed and tongued in gold .

The flag was white and red.

The area of ​​Bohemia is about 52,065 km². It borders in the northeast on Silesia , in the east on the historical region of Moravia , in the south on Austria , in the southwest and west on Bavaria and in the northwest on Saxony . The Ďábel at Petrov was determined as the geometric center .

The historic triangle with Moravia and Austria is located at the head of the Bohemian Saß am Hohen Stein near Staré Město pod Landštejnem .

Bohemia is essentially limited by its four peripheral mountains:

Thus it forms a landscape basin , with a few small exceptions limited by the watershed of the catchment areas of Moldau (Vltava) and Elbe (Labe) (up to the border with Germany). The Eger (Ohře), whose headwaters lie in the Fichtel Mountains in Franconia , also flows into the latter .

Parts of the Czech Republic:

Bohemia comprises the western two thirds of the Czech Republic . Today these include the Czech capital Prague (Praha), the Central Bohemian Region (Středočeský kraj) that surrounds it and the regions around this region clockwise Reichenberg ( Liberecký kraj ), Königgrätz ( Královéhradecký kraj ), the larger part of the Pardubický kraj , the western half of the Kraj Vysočina , almost the entire South Bohemian region (Jihočeský kraj), the Pilsen region (Plzeňský kraj), the Karlovarský kraj , the Ústecký kraj around Ústí (Aussig) and the Jobova Lavahota region, which today belongs to the South Moravian region (Jihomoravský kraj) .

The current borders of Bohemia are well over 1000 years old, only the Egerland was added in the late Middle Ages . Bohemia is encompassed on three sides by mountain landscapes. With the Fichtelgebirge it connects to the central German terraced landscapes. Bohemia is so closely connected with Moravia that one can see a common Bohemian-Moravian terraced land in the space between Eger , Elbe and Danube on the one hand and March and Naab on the other.

The catchment areas of the Danube and the Oder amount to only 6.4% of the land area (3184 km²), while the catchment area of ​​the Elbe occupies 48,772 km². The river system of the Elbe also includes the Vltava , which flows into the Elbe at Mělník . In the far east there are some brooks that drain to the March , so the main European watershed runs through Bohemia.

The terraced land of Bohemia is divided by the Elbe and Eger, Sázava and Berounka and by the deep meridian furrow of the Vltava. The small, all around enclosed plains are:

There are also numerous mountains here:

The natural border of Bohemia to the west is formed by the Bohemian Forest , which is connected to the Fichtel Mountains through the Waldsassen plateau .

The name is derived from the Celtic tribe of the Boier ( Boiohaemum = home of the Boier, late Latin: Bohemia ).

→ Main articles : History of Bohemia  and the Kingdom of Bohemia

The King of Bohemia was one of the seven electors who elected the Roman-German king . 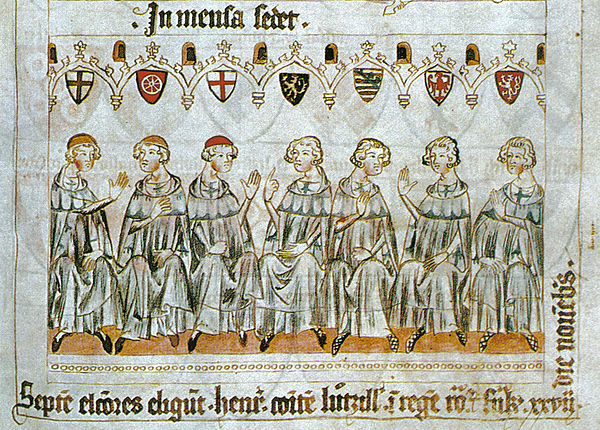 In 1308 in Frankfurt am Main, the seven electors elect Heinrich VII from the House of Luxembourg as Roman-German king. There are (see coat of arms above the heads) from left to right the Archbishops of Cologne, Mainz and Trier, the Count Palatine of the Rhine, the Duke of Saxony, the Margrave of Brandenburg and the King of Bohemia. In fact, the King of Bohemia was not present.

The number of circles and thus their size changed several times. This district division was in effect until 1862, but shortly after the revolution of 1848 it played practically no role for the administration.

The district structure (16 districts) between 1833 and 1849 according to Johann Gottfried Sommer was: 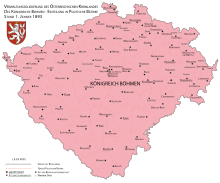 Apart from minor changes, this district division was in effect in Bohemia until 1938, i.e. also in the First Czechoslovak Republic . For the development in Moravia and Slovakia see Okres .

Counties and districts under German occupation

By the Munich Agreement of September 29, 1938, against the will of Czechoslovakia, the predominantly German-speaking part of Bohemia was added to the German Reich and divided into urban and rural districts; Overarching were administrative districts (the south-western parts came to the Reichsgau Oberdonau , the areas in the Bohemian Forest to Bavaria and the rest of them formed the Reichsgau Sudetenland ). The rest of Bohemia, which had been part of the Protectorate of Bohemia and Moravia since March 15, 1939 , continued to be divided into political and judicial districts, although several political districts were still combined in an Oberlandrats district.

In the Reichsgau Sudetenland there were five urban districts and 52 rural districts. There were 67 Bohemian and 30 Moravian political districts in the Protectorate of Bohemia and Moravia. This administrative structure was in place until the end of the Second World War .

Bohemia has always been a European region in which religious and ethnic contrasts clashed. This created conflicts, but also productive interactions. The diversity of Bohemian culture is shaped by the interaction and clash of Czech, German and Jewish influences. For example, among the Luxembourgers , Prague played a key role in shaping the international art of the Parlerzeit . In the 19th and 20th centuries, writers such as Adalbert Stifter , Rainer Maria Rilke , Jaroslav Hašek , Franz Kafka , Max Brod , Karel Čapek , Franz Werfel , Johannes Urzidil and Friedrich Torberg as well as composers such as Bedřich Smetana , Antonín Dvořák , Leoš Janáček and Gustav created their work Mahler and Viktor Ullmann in their works from the rich cultural tradition of the country.

In the second half of the 19th century, an all-disciplinary Czech scientific and cultural scene emerged, the claim of which is expressed, among other things, in the Prague architecture around 1900. The German-Bohemian minority (almost completely expelled after 1945 ) was no less productive; it competed with the entire German-speaking area. The Prager Tagblatt was considered one of the best German-language newspapers of its time. The industry of Bohemia was leading in Austria-Hungary . The crown land became the wealthiest of Cisleithania .

In the field of animal breeding, the golden Kinsky horses should be mentioned, a rare breed whose breeding was founded in Chlumec in 1838 by Octavian Joseph Graf Kinsky .

Bohemian cuisine , bohemian beer and bohemian brass music are famous . Typical for the Czech cuisine are dumplings, hearty meat dishes and sweet desserts (in the Austrian word meaning) for dessert. The cultural traditions of Bohemia are closely related to those in Bavaria and Austria - Bohemian influences are unmistakable in Viennese cuisine, for example.

The term “ bohème ” is derived from the French name bohémien (from the 15th century) for the Roma coming from Bohemia. The character of the designation of origin was lost in French as well as in German, so that bohémien became a designation for disorderly, dissolute customs or for the unsteady way of life in artistic circles and no longer referred to ethnic affiliation.

Wenceslas of Bohemia and Johannes Nepomuk are highly venerated by the Czechs .