This article covers the river in the Czech Republic. For the river of the same name in Romania see: Moldova (river) .

The Vltava ( Czech Vltava pronunciation ? / I , historically Wulda - from the Germanic Wilth-ahwa , which means "wild, raging water"), also known as the "Bohemian Sea", is the longest river in the Czech Republic and the largest Tributary of the Elbe . It is 430 kilometers long and drains an area of ​​28,000 km² with an average of 151 m³ / s at the mouth. At the confluence with the Elbe, the Vltava is longer and richer in water than the latter, making it the main hydrological flow of the Elbe river system.

The Vltava is not to be confused with the river of the same (German) name in north-eastern Romania , from which u. a. derives the name of the Republic of Moldova .

The Vltava has its source in two source rivers: the Warm Vltava, considered the main source river , near Aussergefild (Kvilda) in the Bohemian Forest north of the Lusens ; and the Cold Vltava near Haidmühle in the Bavarian Forest on the Haidelosthang , where it also receives small tributaries from Bavaria . The Little Vltava (Vltavský potok) is the right-hand tributary of the Vltava, but is not counted among the source rivers. The grassy Vltava (Řasnice) is a tributary of the warm Vltava.

Upper course in the Bohemian Forest

Lipno reservoir during flooding in Central Europe in 2002 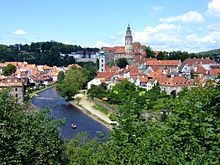 The Vltava flows through the city of Český Krumlov

At the confluence of the Warm and Cold Vltava at the Mrtvý luh bog south of Chlum (Humwald), a district of Volary (Wallern), the first is significantly larger. Like the Warm Vltava above the confluence, the Vltava is now oriented to the southeast. The young river meanders for a few kilometers through a relatively flat, wooded valley before it is dammed for the first time in the 48-kilometer-long Lipno reservoir . Below the lake, the valley has a different character, it is mostly quite deep and has narrow meadows and steep slopes. The proportion of forest remains very high. The Vltava passes the town of Vyšší Brod (Hohenfurth) and gradually changes its direction to the north. She will roughly maintain this direction for the rest of its course. The river then passes through the town of Český Krumlov (Český Krumlov or Krummau) and flows deep below the Dívčí Kámen (Maidstein Castle). In this area the valley is very winding. Before the city of České Budějovice or (Bohemian) Budweis, the Vltava leaves the Bohemian Forest.

From Budweis to the mouth of the Berounka

The dammed Vltava in the Štěchovice reservoir

Around Ceske Budejovice, where the Moldau takes in the water of the Maltsch , the valley widens significantly, but further below it becomes quite narrow, steep, winding with still mostly high proportions of forest. Below Týn nad Vltavou , the Lainsitz flows from the right at Neznašov as the first of its four largest tributaries. Soon afterwards, the Vltava enters the 68-kilometer-long storage area of ​​the Orlík Dam before the Otava flows from the left , which also has its origins in the Bohemian Forest. In the Slapy reservoir , the Vltava is again dammed over dozens of kilometers. A few kilometers below the dam were the famous and notorious St. John's rapids (Svatojánské proudy), to which Bedřich Smetana had set a musical memorial. They sank with the construction of the Štěchovice dam . In the dam area of ​​another dam, the island of St. Kilian with the remains of the Insula monastery lies in the river. Immediately afterwards, the Sázava flows in from the right as the third of the four major tributaries, before the Vltava enters the Prague urban area. There she receives the Berounka , her largest tributary.

Charles Bridge and Prague Castle over the Vltava

The Vltava about ten kilometers north of Prague

The Vltava flows into the Elbe

The Vltava, which has now grown into a mighty river, now flows through the center of Prague , where, together with the countless sights of the city, it offers incomparable backdrops. Even before the river leaves the city, its valley is again relatively narrow with partly steep valley walls before it widens significantly in front of the city of Kralupy nad Vltavou . At Mělník , the Vltava finally flows into the smaller and, until then, shorter Elbe, coming from the right . This gives the impression of being the main river, as it has a wider valley above the mouth and maintains the direction of flow, while the Vltava makes a clear left curve at the mouth.

A navigable canal (the Vraňany – Hořín shipping canal ) branches off a few kilometers above the mouth of the Vltava and flows into the Elbe almost immediately after the Vltava.

Uses of the river

Except for sections in the upper Vltava valley near Oberplan (Horní Planá) and around Budweis and Prague, it flows through a mostly narrow valley. There used to be a lot of rafting and water tourism there. From 1936, but mainly between 1954 and 1962, several reservoirs were built , such as the Lipno reservoir and the Orlík dam , which with a total length of 190 kilometers give the river a completely different character. These reservoirs are known as the Vltava Cascade. The total output of 700 megawatts installed in the hydropower plants is mainly used for short periods to cover peak loads . The Vltava is navigable from the penultimate barrage around 20 kilometers above Prague.

The Vltava Cycle Path runs along the Vltava and merges into the Elbe Cycle Path in Mělník . The Vltava River in the region of Český Krumlov is also a center of the very popular in the Czech Republic canoeing , especially the canoe hiking . 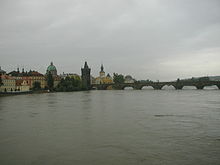 Charles Bridge during the 2002 flood

One of the reasons for the construction of the numerous large dams along the Vltava is the devastating damage that the river caused when it was flooded and that it still does today despite the barrages. So far, the flood of the Vltava River in 2002 is unprecedented. While the average flow in Prague is approx. 150 m³ / s, the flow at the flood peak was estimated at 5300 m³ / s. Due to the flooding of the Vltava, Elbe and their tributaries, 17 people across the Czech Republic lost their lives, and an elephant drowned in the Prague Zoo. The damage is estimated at 3.3 billion euros (further details in the article Elbe flood 2002 ).

The course of the Vltava provided the template for the romantic symphonic poem of the same name (and best known) Die Moldau from the cycle My Fatherland (Má Vlast) by Bedřich Smetana . Smetana depicts, among other things, the two sources of the Vltava, its course through the Bohemian landscape, the roaring water in the now submerged St. Johann rapids, the broad lower Vltava, its course past the Vyšehrad through Prague and its confluence with the Elbe . Likewise, Smetana refers to the culture around the river; this is how hunting and a peasant wedding are represented.