A tributary is a river that flows into another, usually larger, river and is therefore tributary to it.

Main rivers, on the other hand, mostly reach the sea or otherwise end by drying up or evaporating , sometimes in terminal lakes . 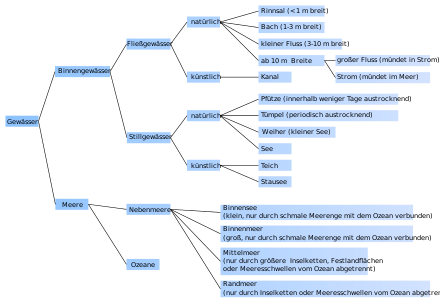 The term tributary in the described sense is largely unambiguous in the colloquial language (the tributary is also a tributary in hydrological and geographic usage). However, some distinctions from neighboring terms are less obvious.

The term inflow is more unspecific and also includes a little more in the geographical part of its meaning: Among other things, artificial channels such as canals (meaning power station canals or sewers, but not canalized naturally created flowing waters) or waters that flow into lakes and thus withdrawn from a meaning comparison to be carried out directly in pairs are.

The term inflow also includes non-linearly inflowing water, such as groundwater or extensive inflowing water after heavy rain (up to stratified floods in alternating humid climates).

In the geographical context, side stream is often used to describe the smaller part of the river that flows around a river island . The term does not refer to river junctions , but to temporary or permanent river branches . The terms tributary or river arm are used in a similar sense .

In some cases one speaks of two source rivers without an apparently clear main river. They then unite to form a river with a different name, as in the example of Fulda and Werra , which unite to form the Weser , or both have the later names with additions such as Vorderrhein and Hinterrhein or Weißer Main and Roter Main .

The distinction between terms makes it clear that the lemma tributary describes only one of many elements of a river system .

The orohydrografische consideration of a river system is not uncommon in the determination of the main Quellastes and the hierarchy of the tributaries to different results than suggested by the historically grown river names. Nevertheless, the names that have evolved over time usually also have an effect on the flow order numbers.

Naming of main and tributaries

When two rivers meet, the smaller one usually flows as a tributary into the larger river, which retains its name as the main river. It is not, however, bindingly defined which measure determines the size of the river. The historically grown naming has usually allowed the apparently larger river to retain its name. The water flow is therefore usually used to determine the main flow. Occasionally, for example when the volume of the rivers is not known or not obvious, the length of the river or the catchment area, both roughly determinable from topographic maps , are used.

In ambiguous cases, it is not uncommon for none of the rivers to carry the name further. A well-known example of a new river name from the mouth is the Weser , which arises from the longer Werra and the more water-rich Fulda . What is interesting about this example is that the Werra and Weser were once named as a river ( Wisahara / Visarius ). Other examples are Marañón (more watery) and Ucayali (longer), from which the Amazon emerges. The Rednitz (longer with the Franconian Rezat) and the Pegnitz form the Regnitz near Fürth . The Brigach and the water-rich and longer Breg bring in Donaueschingen , the Danube feeder path.

Tributaries can sometimes be longer than the richer main river or have a larger catchment area. In the first case, the reason can be a narrow catchment area or, in the other case, a lower mean discharge from the catchment area.

There are also tributaries that carry more water at the mouth than the nominal main river. They are thus part of the main flow path in a river system, i.e. the main river from a hydrological point of view. Many of these apparent tributaries also exceed the main river in terms of length or size of the catchment area.

Common reasons why the smaller of the two rivers is allowed to bear the name of the merged river are:

The following is a sortable table of tributaries, which should be addressed as main rivers at their mouths according to aquatic characteristics. In the basic setting, the table is arranged according to the discharge ratio (column 9). The parameters runoff , catchment area and length relate to the place immediately above the mouth.