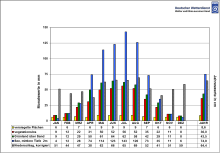 Mean monthly and annual values ​​of the level of evaporation for selected land uses and the corrected amount of precipitation for model locations in Germany. Average values for the years 1893 - 2014 .

Mean monthly and annual values ​​of water evaporation and the corrected amount of precipitation for model locations in Germany. Mean values ​​for the years 1893–2014.

Annual values ​​of the evaporation of free water surfaces (lake, mean depth 6 m) for a model location in Germany. Mean values ​​for the years 1893–2014.

Annual values ​​of the potential evaporation height (with unlimited water availability) according to Turc / Ivanov for a model location in Germany. Mean values ​​for the years 1893–2014.

During evaporation , a substance changes from a liquid to a gaseous state without reaching the boiling point. Evaporation occurs when the gas phase above the liquid is not yet saturated with vapor .

If there is a single substance in a closed vessel, which can be in gaseous or liquid form at the given temperature, depending on the pressure, an equilibrium is established between the liquid and the vapor in the vapor- saturated gas space above the liquid. The pressure in the vessel is the vapor pressure of the liquid. If the vapor is pumped off, the equilibrium between gas and liquid is disturbed, so that liquid again changes into the gas phase. If another gas (e.g. air) is present in the gas volume, part of the liquid evaporates here too until the equilibrium between liquid and gaseous is restored. However, the pressure at which this happens is greater due to the added gas. Evaporation is the saturation of the surrounding gas space with the evaporated gas of the liquid until a vapor-liquid equilibrium (depending on the vapor pressures of all substances involved) is reached.

Classification of the phenomenon in thermodynamics

Evaporation itself represents a phase change and is therefore also derived from the laws of thermodynamics , without which one cannot understand this process. According to the Maxwell-Boltzmann distribution , the particles of a gas, but also, in a similar form, the particles of a liquid, have a velocity distribution. Both slow and faster particles always exist at the same time, with these having a specific kinetic energy and the proportion and speed of the faster particles increasing with increasing temperature. Since fast particles with a sufficiently high kinetic energy are able to overcome the forces of attraction that act on them through their neighboring particles, some of them always change from the liquid to the gaseous phase. However, slowed-down particles of the gaseous phase always return to the liquid phase, which is why a dynamic equilibrium is established over time, without any external influence and without any of the phases being used up. However , such equilibrium is not always achieved in the earth's atmosphere (because wind carries the humidified air away). If the equilibrium is so disturbed that more particles emerge from the liquid phase than enter it, one speaks of evaporation. Evaporation can also lead to the complete disappearance of the liquid phase, which is known as desiccation .

For evaporation, thermal energy (see heat of evaporation ) is required, which comes from the liquid phase or the gas phase sweeping over it. During the evaporation process, one of the two phases cools down; this leads to what is known as evaporative cooling , whereby the evaporation heat is supplied to the vapor phase in the form of latent heat .

The amount of saturation of water vapor in air as a function of temperature .

Water evaporates at room temperature , provided the air is not saturated with water vapor , which would correspond to the dynamic equilibrium described above.

The principle of water evaporation, for example, is used to dry laundry in the open air or to make puddles disappear. The effect of evaporative cooling by water is the basis for the effect of thermoregulation through sweating , as the evaporation heat is removed from the skin and this is thereby cooled.

The absorption of water into the earth's atmosphere through evaporation takes place on the earth's surface, for example water surfaces , soils and plants . The evaporation depends mainly on the following factors:

Due to the diverse parameters on which the evaporation depends, its determination is very difficult and time-consuming. In most cases, the evaporation is therefore not measured, but only estimated with the help of mathematical models with an approximation . The resulting evaporation per unit of time, so to speak the evaporation speed, is called the evaporation rate .

Evaporation of other substances

Highly volatile solvents such as acetone and diethyl ether also evaporate easily (and their vapors then accumulate in the room air). The principle of evaporation is also used for solvents in paints , which then dry up after a paint job (and then usually chemically crosslink to form a paint film).

The evaporation of water above the ground can only be measured with great effort, usually with an evaporimeter or lysimeter . What is measured is the so-called grass reference evaporation , which is used as a synonym for measurement technology due to the rather theoretical definition of potential evaporation. On the other hand, a large number of different approximation formulas are much more widespread, which can be used to calculate evaporation, adapted to various influencing factors. Their errors are mainly based on the data available in each case, which is problematic in particular with regard to influencing factors such as use, vegetation, root depth and hydrological soil properties. However, approximation formulas based on standard meteorological parameters generally only achieve a very limited degree of accuracy.

Examples of the technical use of evaporation

Due to the use of environmental and solar energy, open evaporation is a very energy-efficient process. That is why it is also used on an industrial scale where the product stability allows it. When extracting lithium , the brine is partially concentrated by a factor of 40 in huge solar ponds before being transported to the Salar de Atacama , Chile, or in Silver Peak , USA. The lead time through more than 10 solar ponds can be up to two years. Another example is the extraction of sea salt from sea water. In Dampier , Australia , salt marshes are operated for this purpose on an area of ​​more than 9,000 hectares. It is true that the evaporation in solar ponds in Germany cannot be used because of the high levels of precipitation and relatively low solar radiation. But here, too, evaporation is used to extract salt in graduation towers.

Another technical application of evaporation is solar sewage sludge drying. The sewage sludge that is pre-dewatered from wastewater treatment is applied over a large area in drying halls with a transparent building envelope (foil, polycarbonate or glass covering). The shining sun heats the stored sewage sludge, whereby the steam pressure in the sewage sludge is increased compared to the air above and water evaporates from the sewage sludge. The humid air is removed from the drying hall via computer-controlled ventilation technology. Renewable secondary fuel with a calorific value of 8–11 MJ / kg DM (corresponds to approx. 2–3 kWh / kg DM; conversion: 1 MJ = 0.2778 kWh) is produced from the waste sewage sludge, and fossil fuel in coal-fired power and cement plants Replaced energy sources. The largest solar sewage sludge drying plant with a drying area of ​​7,200 m² is currently operated in Nicaragua using the Wendewolf process.

The world's largest solar sewage sludge drying plant with a drying area of 20,000 m 2 has been in operation near Palma since 2008 . In 12 double halls, approx. 30,000 t of sewage sludge per year are solar dried in a batch process. The sewage sludge drying is operated with the turning robot "electric pig". The size of the connected sewage treatment plants is 600,000 population equivalents.

Even in ancient times, people used the energy required for the evaporation process to cool drinks and other food. These were kept in porous clay vessels, and the evaporation of a small part of the liquid through the vessel wall meant that the remaining larger part could be kept relatively cool. Even with felt or leather -covered flasks use this cooling effect, for which they must be moistened. Air humidifiers are a widespread practical use of the evaporation principle. Further application examples are the measurement of air humidity with the help of a psychrometer .