The wind speed is the speed of the air against the ground. It is a directed quantity, defined as a vector with a horizontal and a vertical component. In practice, however, this is usually limited to the horizontal component and categorized into a wind strength through certain speed intervals. This makes it possible to prepare the speed vector in an application-oriented manner so that the relevant elements can then be entered in weather maps, for example. For certain applications like aviationHowever, the vertical component of wind speed is also important, for example to estimate updrafts for gliders or paragliders .

The wind speed can be estimated with a wind sock or phenomenologically, for example using the Beaufort scale. Thermal updrafts can be estimated using cloud formations and such information, which is linked with little effort, is also helpful for numerous other special cases. With the artillery, the approximate wind speed at different heights is determined with a wind rifle .

The wind speed is usually measured more precisely with a small rotating wind measuring device, the cup cross anemometer . In the meantime, however, there are also more precise ultrasonic anemometers and SODAR systems that use the propagation of sound waves to record wind speed and are often able to measure vertical profiles in this way.

The SODAR systems measure wind speeds from the ground up to heights of 200 m. The height profile can be determined well with this method. However, the absolute accuracy is usually not sufficient to carry out energy yield calculations for wind turbines , for example .

Very small wind speeds can be measured with the hot wire anemometer .

The World Meteorological Organization stipulated that the mean value of the last 10 minutes should be given for the wind speed given in weather maps and station reports. The peak gusts of such an interval can be twice as strong and stronger, but there can also be moments with no wind. This measurement specification only applies to official or published measurement values, but not to wind forecasts for which the respective publicist can set his own political and economic rules .

The wind speed is expressed in kilometers per hour or meters per second (m / s), knots (kn) = nautical miles / hour (sm / h) and in the USA also often in miles per hour ( mph ). The different units can be converted as follows:

With the wind arrows on weather maps, the meaning of the plumage is different. It is also inconsistent whether the place in question is at the tip, in the middle or on the feathers . Originally, a feather was placed alternately at the end of the arrow for each wind force after Beaufort . This representation is helpful in seafaring, since it also allows low wind speeds (calm areas) to be resolved. This form is used by the worldwide distributed pilot charts of the US NGA . A newer system places the plumage on the side of the arrow with the lower air pressure and the reference location at the top. Each triangle stands for a wind speed of 50 kn, each whole line for 10 kn and half a line for 5 kn, so the resolution increment is 5 kn. The sum of all individual speeds describes the wind speed. The system is also suitable for speeds far beyond the Beaufort scale. However, the meaning of the 5 kn steps is inconsistent. They either represent the interval rounded to 5 kn, i.e. indicate the middle of the interval. This interpretation is used for the GRIB data, which can be obtained free of charge from NOAA , for the free digital nautical chart OpenCPN or the GRIB viewer ZyGrib. On the other hand, they can also represent the upper limit of the interval (see table with conversion of knots to km / h).

If wind speeds are not specified with their measured value, they are usually classified according to the Beaufort scale, which is characterized by the use of the terms wind force (e.g. 5) or Beaufort (e.g. 5) . It was developed by Sir Francis Beaufort from 1806 and introduced by him to the Royal Navy as the first hydrograph of the Admiralty from 1830 . However, the naming of the scale in his honor did not take place until the beginning of the 20th century. By the abbreviations bft. , bft , Bft or BFT , e.g. B. as Bft 5 or 5 Bft the classification gives the impression of a unit. It is originally a phenomenological scale that was developed by describing the effects of wind on the control of the sail of a warship and later also on the swell. A forerunner was the Smeaton-Rouse scale by John Smeaton and Rouse, who described the behavior of windmill blades in 1759. In 1898 the Deutsche Seewarte Hamburg developed a scale based on measured values ​​in kilometers per hour and in 1906 George Simpson of the British Meteorological Service published a scale based on nautical miles per hour (knots), which was then named after the founder of the British Meteorological Service, es Beaufort. This scale from 1906 has been called the Simpsons scale since 1926 to distinguish it from the Beaufort scale, the one from 1898 according to Wladimir Peter Köppen as the seakeeping scale . Independently of each other, both scales attempted to come close to the empirical classification already introduced in shipping.

Other classification systems are the Fujita tornado scale for tornadoes and downbursts and the Saffir-Simpson scale for tropical cyclones . 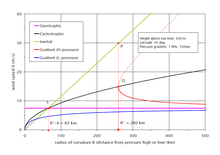 Typical wind speeds depending on the distance to low and high pressure areas .

The diurnal course of the wind speed, which is much more pronounced in summer than in winter, shows a minimum during the night and a refreshment during the day. The annual cycle, based on either daily or monthly means as long-term averages, shows a minimum in summer and two maximums in spring and winter.

The following list of speed records must be differentiated according to wind type:

The highest wind speed of a gust of the gradient wind that has been measured in Germany so far was 335 km / h. It was registered on June 12, 1985 on the Zugspitze .

The highest wind speed in Switzerland was measured at 285 km / h on the Jungfraujoch in the night of February 26th to 27th, 1990 during the hurricane Wiebke .

The highest ever measured speed of a gust of the gradient wind is 408 km / h and was measured on April 10, 1996 during the tropical cyclone Olivia on the Western Australian island of Barrow Island . It replaced the previously valid peak value of 372 km / h (231 mph), which was recorded on April 12, 1934 on Mount Washington (New Hampshire) .

Higher wind speeds can only be registered in special cases. At Bridge Creek, Oklahoma (USA), a wind speed of 496 ± 33 km / h was measured on May 3, 1999 within a tornado of the Oklahoma Tornado Outbreak using a Doppler radar . In 1970, jet streams were measured over Japan at a speed of 650 km / h, but not near the ground, but in the free atmosphere.

Even higher wind speeds have been observed on Mars , Jupiter and especially on Neptune .

The speed distribution of the wind can be described quite well with a Weibull statistic .