The title of this article is ambiguous. Further meanings are listed under Aufwind (disambiguation) .

An updraft is a localized, vertical movement of air. In the case of large-scale effects, for example on a front , one says " slide up ". A contrast to the ascendant are downwind , downwind , downburst colloquially, " air hole called".

Thermal updrafts ( thermals ) are caused by temperature differences in the air masses . Solar radiation heats the earth's surface and, as a result, the air on top. Since warm air is lighter and less dense than cold air , the heated air parcels rise like large soap bubbles . They rise until they get into similarly dense air or have cooled down to the ambient temperature. Mountaineers often feel it on their afternoon descent as a warm headwind from the valley. Fewer warm air masses sink again in their surroundings and thus ensure an exchange of air. 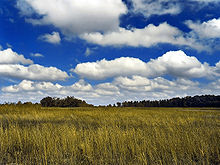 The intensity of these updrafts depends on solar radiation, the temperature profile of the atmosphere, the nature of the earth's surface, humidity and the angle of incidence. A dry grain field can give off more heat than a moist meadow, a mountain slope inclined towards the sun is warmed up more than the plains. These updrafts are usually limited to a few tens to a few hundred meters. Tight updrafts are called thermal tubes or "beards" in gliding .

Large-area updrafts usually occur under clouds , especially under cumulus clouds , the usual fair-weather or "sheep cloud". Clouds are indicators of rising air, the humidity of which cools with increasing altitude and condenses when the dew point is reached . The heat of condensation released in the process can, under favorable conditions, lead to a further rise in the air parcels. The cloud then begins by itself to suck in more air and to provide further updraft.

If the humidity is low, or if there are no condensation nuclei, the formation of clouds may not occur, which is called blue thermal . The thermal updrafts can only be detected by birds, pollen or dust that are ascending with them.

Slope updrafts, on the other hand, are caused by orographically forced rise in the air when the wind blows against a mountain flank and is deflected up the slope on the windward side . On the leeward side of the mountain ridge, the air flows down again as a downdraft . In certain constellations, updrafts, the so-called lee waves , can also arise in the lee .

Slope updrafts are more spacious and, due to the constant air flow, more stable than thermals and allow glider pilots and paragliders on suitable terrain, e.g. B. on a steep coast or a bulging slope in the valley wind , often quiet, hours-long soaring for kilometers .

Leewaves are a weather phenomenon caused by wind that can occur on the side of the mountains facing away from the wind (lee). The air flow starts to vibrate when sweeping over a mountain range . The wave consists of an ascending part (updraft) and a downdraft. There can also be horizontal air vortices, rotors. These waves can be seen as a smooth, polished lenticular cloud .

These updrafts are a way for gliders to soar to great heights. For other aircraft, lee waves cannot be used because of the high wind speeds associated with them, or they represent a danger due to their turbulence .

If air masses flow onto each other without being able to move sideways, for example in mountain valleys, then they rise. In the mountains, convergences occur e.g. B. in the vicinity of passes when different valley winds collide. They can sometimes be recognized by a single cloud over the middle of the valley, while other clouds are over mountain peaks.

In the evening, when cooled air flows down from the mountain slopes on both sides of a valley, a convergence also forms over the valley, known and popular in aviation circles as "evening thermal" .

In the free atmosphere , convergences also occur in connection with fronts and often result in a deterioration in the weather ( cloud cover , precipitation ).

A glider covers about 33 m / s at an average flight speed of 120 km / h. With a glide ratio of 1:40, this means a sink rate of 0.83 m / s. Therefore, it will rise slightly with a updraft of 1 m / s. The circling in tight updrafts (aviator language: "cranking") worsens the glide ratio due to the high incline, so that only stronger updrafts lead to an actual gain in height. The "lowest sink" (lowest loss of altitude per unit of time) is achieved at a lower speed than the "best glide" (lowest loss of altitude per unit of distance covered). It is particularly useful when circling in thermals , where the important thing is not to cover a distance, but to make the best possible use of the updraft. A zero slider is a weak updraft that does not bring any gain in altitude, but only compensates for the glider's own sinking.

For gliding records in long-haul flight or triangular flight , stable slope winds are more favorable than thermals , because longer distances can often be flown without circling in the updraft. The record distances are already well over 2000 km; on January 21, 2003, the pilot Klaus Ohlmann and his co- pilot flew a distance of 3,009 km in Argentina .

Winds with paragliders and hang gliders

For paragliders the glide ratio is approx. 1: 9, for hang gliders approx. 1:20. This means that these aircraft cannot cover such long distances as with gliders . However, because of their lower speed, they can fly tighter circles and make better use of the ascent in thermal bears. Dynamic updrafts can only be used to a limited extent due to the limited maximum speed of these aircraft.

Nevertheless, the world record for paragliders is over 500 km.