The title of this article is ambiguous. Further meanings are listed under Wind (disambiguation) . 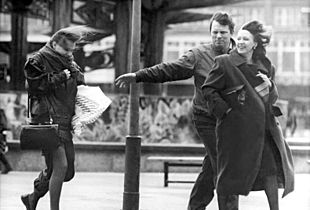 As wind ( althochdeutsch wint ; as synonymous Latin ventus to indogermanisch ue , blow, blow ') is in meteorology a directional, greater air movement in the Earth's atmosphere called. The Astronomy knows beyond winds on planets and moons with a sufficiently dense atmosphere blow.

Head wind and the apparent wind resulting from it are not winds, but are perceived as such. Air movements within closed rooms or systems (e.g. chimneys) are referred to as drafts .

Phenomena such as the solar wind or the electric wind have nothing to do with wind in the meteorological sense.

The pressure-gradient force following, the air moves from the high altitude above the equator to the height above the low Pol

The greater the difference between the air pressures, the more violently the air masses flow into the area with the lower air pressure and the stronger the wind resulting from the air movement.

The wind direction is usually given in the form of a compass direction from which the wind comes. They are measured with weather vanes (wind socks). North and south winds are also referred to as meridional winds , east and west winds as zonal winds . Each wind direction can be broken down into a meridional and a zonal component.

Below the free atmosphere , the wind is also influenced by friction and can also vary greatly due to morphological structures such as mountains, valleys and canyons (example: foehn or downwind , updraft , valley wind , mountain wind ). In rotating systems such as hurricanes , centrifugal force also plays a decisive role. 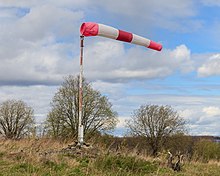 The windsock is one of the oldest tools for estimating wind speed and direction
→ Main article : Wind speed

The speed of the wind is measured in meters per second (m / s), in kilometers per hour (km / h) or in seafaring and aviation in knots (1 kt = 1.852 km / h) with an anemometer. The highest ever measured wind speeds of 500–650 km / h have so far only occurred at great heights in the so-called jet streams .

The strength of a wind - according to the very popular Beaufort scale - is expressed in the unit Beaufort (Bft).

A violent movement of air of short duration is called a gust .

The power of the wind

The force ( wind pressure ) that the wind exerts on objects (e.g. on a valley bridge) increases quadratically with the wind speed: twice the wind speed means four times the force. The force of the wind acting on structures and components is called wind load . The wind can also exert a suction effect, see wind suction .

The kinetic energy of the wind is used as renewable energy , see wind energy .

Classification according to the driving forces

Classification according to the magnitude of the air movements

A distinction based on the spatial and temporal magnitude of the winds is also common. There are essentially three groups:

Winds on other planets

For the wind conditions on the other planets of the solar system see: