Wind direction is the direction , from which the wind comes . In meteorology or nautical science it is given either as one of eight or sixteen cardinal points or as an angle to north. For station reports (observation), the wind direction is given in sixteen 22.5 ° steps (north (N), north-north-east (NNE), north-east (NE), east-north-east (ENE), east (E), etc.), but only for weather forecasts in eight 45 ° steps ( north (N), northeast (NE), east (E), southeast (SE), south (S), southwest (SW), west (W) and northwest (NW)). With the angle measure, the angle (0 ° to 360 °) between north and the wind direction is measured clockwise ("over east"). A north-easterly wind would therefore be 45 °, a north-westerly wind 315 °, etc. 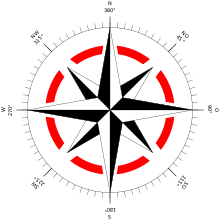 On the compass rose of St. Peter's Square (Vatican) the main wind directions are indicated as follows: N Tramontana / NW Maestro / NE Greco / W Ponente / O Levante / SW Libeccio / SO Scirocco / S Ostro. This division of the compass rose into eight parts (45 ° each) goes back to antiquity and the Arabs. The relative frequencies of occurrence of the wind directions are shown in frequency wind roses (also simply called wind roses). The incidence windrosis is divided into 16 parts (N, NNW, NW ...). The drawn radius of the segments corresponds to the frequency of the associated wind direction (here again the direction from which the wind is blowing). The mean wind strength depending on the wind direction can also be entered in a wind rose.

Wind arrow: The wind is blowing from west (to east) at a speed of 65 knots.

The wind direction is indicated by arrows on weather maps. The tip of the wind arrow indicates the direction in which the wind blows. At the base of the arrow, the direction from which the wind blows, lines and triangles indicate the wind speed . This "fletching" indicates the wind speed; Half a line means 5 and a whole line means 10 knots . Five whole lines are combined into a pointed, filled triangle, which accordingly means 50 knots. The causing low pressure area is located in wind maps on the side of the fletching.

If the wind of a weather station is drawn in on weather maps, a small circle is drawn at the arrowhead, the location of the station on the map. If there is no wind, a small circle with a double circular line (without an arrow) is drawn for this station.