This factual article contains neither literature nor individual evidence for its statements. This is particularly problematic with regard to the definition of the lemma ("always three-digit")

Four ships on the same course in the English Channel

Courses related to the geographic North Pole are as pointing right , with respect to the magnetic north pole as ill-setting designated. The angles are counted clockwise. Course 090 means course east .

From the measured or estimated speed and the time until the course change, the distances covered in the course direction are continuously calculated and entered on the map. The process is called dead reckoning . It is checked by location regulations and corrected if necessary. Location determinations can be made by bearing landmarks of known positions, by other methods of terrestrial navigation and astronavigation, and with technical aids for location determination, such as GPS .

Angle relative to north according to DIN 13312

A distinction is made between the following courses, the associated abbreviations and their English equivalents:

The heading (English: heading ) shows the right-advance direction along the longitudinal axis of an aircraft or the keel line of a ship. Because of the disruptive effects of wind and ocean currents, the heading almost always differs from the direction of movement and the courses mentioned above:

The following two rates are determined by mathematical correction from tax rates:

The same applies to flight navigation in aviation with regard to the windward angle (L).

The direct route from a starting point ( origin ) to the destination ( destination ) is via the course . This is the connecting line of both points - see drawing. If there is a disturbance, for example a current or cross wind, the target is missed. The path covered, the path over ground or track , deviates from the course. The ship or aircraft pilot counteracts this. Since the drive is connected to the vehicle axle ( heading ), it turns the entire vehicle in the direction of the fault. If it is possible to compensate for the course error ( TKE , deviation between planned course and track), the vehicle follows its original course, but offset in parallel by the so-called transverse offset to the target course. Since TKE is now zero, the drift angle determines the tilting of the vehicle from the direction of travel.

Of the instantaneous position of the destination is located in the bearing line ( bearing ). To get there, the angle between the bearing and the track, i.e. the course deviation ( turn ), must be reduced to zero.

In the past it was extremely difficult to determine the way over the ground and thus your own location. Today GPS receivers record tracks in real time anywhere on earth. 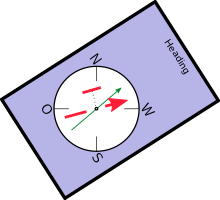 GPS direction indicator for course (red) and bearing (green). North is up. Alignment along the orientation of the aircraft from the graphic above.

Course ( Course , Desired track , DTK )
The planned route from the starting point ( Origin ) to the destination ( Destination );
Path over ground ( Track , TRK , Course over Ground , COG )
Actual distance covered, track on the ground;
Bearing ( Bearing )
Connection line from the current position to the destination;
Orientation ( Heading )
Orientation of the vehicle;
Lateral deviation from the target course ( Off Course , Crosstrack distance , Crosstrack error , XTK )
Distance between planned and current course;
Course deviation (TKE, Turn )
Angle between bearing and track, i.e. the deviation from the target relative to the distance covered; Since it is now possible to record the track continuously, the turn can be controlled to zero and a bearing course can be kept continuously;
Heading error angle ( Track (error) angle , TKE )
Angle between the planned course and the path over the ground (track);
Drift angle ( drift angle , DA )
Angle between path over ground and orientation. If TKE = 0, the angle is also called the windward angle (WCA) .

The graphic shows the direction indicators of a GPS receiver in the aircraft from the graphic above. The lateral distance of the interrupted course arrow (red) correlates with the lateral deviation. The green arrow shows the bearing, the outer frame the orientation of the aircraft. North is up.

Especially for wind-driven boats there are - practically without meaning for navigation - different systems of terms under the designation course towards the wind . The wind direction perceived on the earth's surface is defined as the reference direction for (fast) ice sailors . In the case of (slow) sailing vehicles, on the other hand, there is currently (2007) the tradition of using the direction of the "apparent" wind felt on the vehicle, which is composed of meteorological wind and airflow through vector addition, as the reference direction. In this context, one of the most well-known terms in practice is that of "keeping course", which means something like "adhering to or steering a given course exactly" (nautical instruction to the helmsman: "right so" or in English "steady" ). The term “stay on course” applies equally to aviation and shipping.