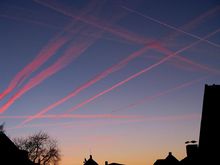 The aviation , even flying , aviation , aeronautics or rare flying skills , the transport of persons or goods through the Earth's atmosphere without connection to the earth's surface (except for ground effect vehicles ). The term encompasses all persons, companies, activities and sub-areas (including on the ground) that affect the operation of aircraft .

Origin of the designations

The term “aviation” was coined in the 19th century based on seafaring . This relationship has persisted to this day in the fact that the verb “drive” is used for airships . The largely outdated term aeronautics ( ancient Greek ἀήρ aēr "air" and nautical ; French aéronautique , English aeronautics ) also comes from the time of the airships (for example balloons or zeppelins ).

Aviation is derived from the Latin avis "bird". The word aviation , which also means "aviation", has the same origin in French and English .

Occasionally the word Aviation (with English pronunciation) is used as a foreign word in German; For example, Lufthansa referred to itself as an "aviation group", but now as an aviation group.

Distinctions according to use

A distinction is made between two areas or types of aviation:

Civil aviation can be divided into:

This is regular, public and commercial air traffic or charter and occasional traffic .

This includes private air sports , commercial business flights but also flights with a sovereign mandate , for example those of the police or air rescue .

This applies to all flight operations with military aircraft or for military purposes.

Differentiation according to principle

Aviation is also divided into two types according to the type of lift:

There are also so-called hybrid airships , which make use of both types of lift. Finally, there are aircraft without lift that fly by recoil . However, these have not yet established themselves in aviation.

Numerous agreements have been concluded for coordination in international aviation, for example the Chicago Convention in December 1944 , with which the International Civil Aviation Organization (ICAO) was founded. The ICAO alphabet was defined as the uniform alphabet for aviation . Times are always given in UTC .

The International Air Transport Association (IATA) is the umbrella organization of 250 airlines worldwide , which operate around 94% of all international flights.

Aviation and the greenhouse effect

According to the 1999 IPCC study, the share of aviation in the global human-made contribution to the greenhouse effect is around 3.5%. In Switzerland , the proportion is as WWF Switzerland 18.8% with a global average of 5%.

According to research results from 2019, the contrails resulting from water vapor and soot from the exhaust gases of the aircraft play a more important role than initially assumed . In particular, the ice clouds that form at a height of around eight kilometers would prevent heat from being radiated from the earth into space and contribute more to global warming than the CO 2 emitted during flight .

With the EU Emissions Trading Scheme (ETS), which came into force across Europe on January 1, 2005, the European Union is attempting to control the emission of greenhouse gases. In December 2006, the EU Commission proposed that air traffic be included in the EU emissions trading system. As of 2012, airlines will have to provide evidence of emissions rights on routes that touch EU airports.

In addition, passengers can offset their CO 2 emissions through donations to organizations such as Atmosfair , myclimate and Klima-Kollekte .

Wikinews: Aviation  - In The News