An object weighs less when it is immersed in a liquid - depending on the mass of the displaced liquid, the weight is reduced in accordance with the Archimedean principle .

Is the weight of the body is greater than the currently acting buoyancy, the body decreases in the fluid from . In the jargon of the Navy this is also negative buoyancy or negative buoyancy called, for example, in negative buoyancy cells of submarines. Is the weight force smaller, so the body increases in the fluid on . A movement driven by buoyancy ends when the buoyancy force and weight have found a new balance. For example, a hot air balloon rises until it has reached a layer of air with a lower density, which causes less buoyancy and has the same density as the balloon. When the forces are in equilibrium, the balloon floats without any change in altitude. A submarine that appears to the surface of the water can achieve equilibrium by partially leaving the water and thereby reducing its buoyancy. The submarine floats on the surface.

The strength of the static buoyancy results from the Archimedes' principle , i.e. it depends on the weight that has acted on the fluid that has now been displaced. The density of the body is often compared with that of the fluid in order to make a statement about the sinking, floating or rising of the body. The relation to the specific gravity of the fluid is out of date .

If fluid flows around objects , dynamic lift can also act (which, if it is directed downwards as contact pressure , is also referred to as downforce ), this dynamic lift is the physical principle for flying birds, airplanes and helicopters. 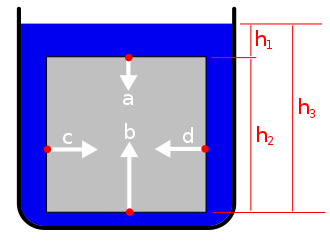 The buoyancy force of a body immersed in a fluid comes from the fact that the pressure of a fluid in the gravitational field , the so-called hydrostatic pressure , increases with depth, so it is different for each expanded body "below" and "above" . For example, is immersed parallelepipedic body with its base in a fluid, the hydrostatic pressure on the bottom surface (in the image b in) is greater than at the top ( a ). In the case of irregularly shaped bodies, the static buoyancy force is the force resulting from the (vertical) force components of the hydrostatic pressures that act on all parts of the surface.

Based on the submerged cuboid, one can derive: A buoyancy force acts on a body that is immersed in a fluid with the density :

It is the displaced by the body volume of the fluid, the Erdfallbeschleunigung .

The product of density and volume is the mass of the fluid displaced by the body. And is its weight . The static buoyancy force thus corresponds to the weight of the fluid which would be in place of the immersed body.

This relationship is known as the Archimedean principle .

If the static buoyancy force is compared with the weight of the body under consideration, then the ratio of the densities of body and fluid is decisive for this comparison. It can be summarized in such a way that a body floats in a fluid when its mean density is exactly the same as that of the surrounding fluid, that it rises at a lower density or sinks at a higher density.

The hydrostatic paradox states that the pressure only depends on the depth and not on the shape of a fluid. Therefore, the buoyancy force is independent of the amount of fluid in which the body is immersed. The principle therefore also applies if the remaining liquid has a smaller volume than the submerged part of the float.

The buoyancy force is smaller than the weight force: sinking

A buoyancy force acts on every body not only when immersed in a swimming pool, this is also the case in air. Under normal circumstances, this effect is much smaller (~ factor 1000) than in a liquid, but for precise weighing it must be taken into account that when determining the mass in air, only the weighing value is obtained as an approximate value . Even with small bodies such as oil droplets in air, the buoyancy must be taken into account for precise measurements of the balance of forces, see Millikan experiment .

According to legend, Archimedes of Syracuse was supposed to check the gold content of a crown by dipping the crown and then a gold bar of the same weight into a full water container and measuring the amount of overflowing water. Galileo Galilei suspected that Archimedes instead used a beam balance, similar to the one shown above, to measure density differences due to different buoyancy in the water.

The buoyancy is greater than the weight: ascending

The lift force is equal to the weight

Swimming on the surface 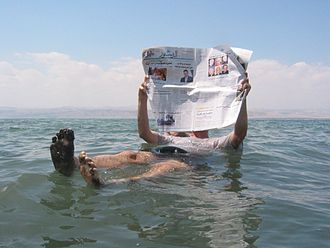 Because of the higher salt content in the Dead Sea , the density of the water is higher than in the North Sea , for example , which leads to a lower sinking depth due to the same buoyancy.

If, in addition to its weight, only the static buoyancy acts on a resting, partially submerged body (e.g. a ship) , then the buoyancy force in static equilibrium applies

regardless of the density of the water, which however has an influence on the depth of penetration of the body (in equilibrium )

The so-called swimming equilibrium states that:

Use: draft of ships

If a ship heels to one side, e.g. B. in turning circle or cross wind, the draft increases on this side, while it decreases on the other side. According to the changed pressure conditions, the center of lift shifts and a moment arises that counteracts the heeling and brings the ship back into its starting position as soon as the external influence subsides.

If a ship is loaded, its weight increases, so it sinks deeper into the water and displaces more water than when it is unloaded. Because of the greater sinking depth, more buoyancy force acts , this is always in balance with the (now greater) weight force .

If this ship drives from the North Sea to the Elbe and thus changes from salt water to fresh water (which has a lower density than salt water), the buoyancy force would decrease in fresh water with unchanged immersion depth. Therefore, the ship sinks deeper until the buoyancy force of the larger sink volume is again in equilibrium with the weight of the ship.

Loading tags on ships indicate the (permitted) immersion depths in water of different densities. The top two horizontal upper edges of the step (towards the circular) freeboard mark for fresh water in inland waters, four lower one below the other for the denser salt water in the seas with different temperatures.

Rising methane bubbles of submarine methane hydrate on storage sites, this can for shipping dangerous. Scottish scientists attribute this to the sinking of a fishing trawler discovered in the Witches' Hole in the North Sea . The rising gas bubbles can therefore reduce the density of the sea ​​water so much that ships suddenly lose their ability to swim.

A buoyancy force also acts on a hydrometer (also called a density spindle) that is immersed in a liquid with the same density :

The depth of penetration can therefore be used to determine the density of the liquid and thus possibly the content of dissolved substances, which can be read off on a scale adapted to the purpose of the hydrometer. A typical example of this is the scale aerometer .

In a liquid thermometer according to Galileo Galilei , the buoyancy bodies arranged in accordance with the temperature dependent density of the fluid in different heights in the respective position of equilibrium

The effect of buoyancy, which changes with temperature, also occurs during submarine dives, when the temperature of the sea water decreases with increasing water depth or the submarine alternates between a warm and a cold sea current during static diving.

See also the illustration of the ship loading marks above, which take into account the different buoyancy of ships in summer and winter and in the cold waters of the North Atlantic and in warmer tropical waters.