The International Space Station on March 7, 2011, captured from the Space Shuttle Discovery 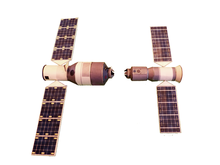 The Russian Mir space station in 1998 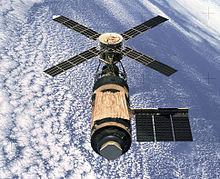 The Soviet space station Salyut 7 with the Soyuz spaceship attached

Space stations are spacecraft that are mostly in the orbit of a celestial body and allow people to live on them for a long time. Since they themselves do not have a propulsion system for locomotion or landing equipment, they are dependent on spacecraft for transport. Room laboratories are a sub-form of space stations .

The technical challenge when operating a space station is, above all, supplying the crew. Due to the high costs of transport, systems had to be developed that allow the operation of a space station to be largely self-sufficient, i.e. H. in a closed circuit. Great progress has been made, especially in the treatment of water and air.

The orbit around the earth is not stable at a height of 300 kilometers, as a very thin earth atmosphere constantly slows down the space stations. Without regular thrust into higher orbits, space stations would therefore re-enter the earth's atmosphere after a few months or years. The gravity of other celestial bodies could also disturb the orbit of a space station. Space stations therefore need a constant supply, especially of fuel for course correction.

The space stations in detail

To date, thirteen space stations have been put into orbit, eleven of which have been manned:

According to the plans of the Chinese space organization CNSA, a permanently manned space station is to follow as the successor to Tiangong 1 and Tiangong 2 by 2022 . NASA wants to operate the Lunar Orbital Platform-Gateway space station with the ISS partners from 2024 . India is planning its own space station for around 2030. 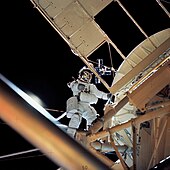 Future space stations could be positioned at a greater distance from the earth in one of the Lagrange points of the earth-moon system. The Lagrange points L 4 and L 5 enable the space station to have a much more stable orbit, which would significantly reduce the necessary course corrections and thus fuel consumption. However, the intensity of cosmic rays is considerably greater at a greater distance from the earth, because there is no protection from the earth's magnetosphere . For such a space station it would be necessary to take special precautions for radiation protection .

One possible concept for future space stations would be the O'Neill colonies , for example .