This article is about a space station. For the hotel of the same name see Hotel Salyut . 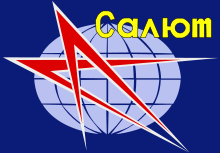 After the Soviet Union the space race had led long, but lost in the first manned moon landing, the near-earth orbit again came to the fore. In order to anticipate the American Skylab program of 1973, a new program was started with Salyut in 1971. The Soviet Union regained the status of being the first to set a new milestone in space.

Since 1964, a military space station was worked on in the Soviet Union, which should represent the counterpart to the American MOL program ( Manned Orbiting Laboratory ) of the US Air Force . This station was developed by the design office OKB-52 under Vladimir Tschelomei and was named Almas ( Russian Алмаз for " diamond ") or OPS ( ОПС, Орбитальная пилотируемая станция , Orbitalnaja Pilotiruemaja stanzija, station for " Orbitalnaja Pilotiruemaja "). The TKS spaceship , which is still to be developed, was to serve as a feeder .

When it turned out in the summer of 1969 that a few years would pass before the first flight of the Almas and TKS, the idea arose to develop a civil space station parallel to this, which was to be based on an Almas structure but used Soyuz technology. For this purpose, the already finished housings and equipment elements including all documents were handed over from Chelomei to the “Central Design Office for Experimental Mechanical Engineering” headed by Mishin. This space station was named DOS ( Russian ДОС, Долговременная орбитальная станция , Dolgowremennaja orbitalnaja stanzija for "long-term orbital station") and was developed by the design office ZKBEM , the former OKB-1 . It should be ready for use by the end of 1971. The final decision to use DOS was made in February 1970, and the DOS station was launched as early as April 1971 under the name Salyut 1 .

The stations of both series made a significant contribution to the research of the technologies that are necessary for a long-term stay and the construction of more complex structures in space .

Outwardly, the Almas stations hardly differed from the first Salyut stations Salyut 1 and 4, as both were based on the work of the Chelomeis design office. The feeder spaceships TKS for three cosmonauts, which were never used for manned flights, were supposed to bring eight return capsules to the space station. In these capsules, 100 kg payload could be returned to earth. The Almas stations were equipped with extensive, high-resolution photo technology. The films could be developed on board.

It is largely unknown that at least one Almas station ( Salyut 3 ) was armed.

Drawing of the Salyut 4 station with a docked Soyuz spaceship

The Salyut stations in front of Salyut 6 consisted of a front lock section with coupling nozzles with a total length of 3.3 m and a diameter of 2 m, followed by the front work area with a cylindrical shape and a length of 3.8 m and a diameter of 3.0 m. This is followed by a conical intermediate section of 1.2 m in length, the diameter of which increases from 3.0 m to 4.15 m, and the rear working space of cylindrical shape and a length of 4.2 m and a diameter of 4.15 m. The end is a cylindrical rear section 1.9 m long and 2.2 m in diameter. The total length of the station was approx. 15 m, the total volume approx. 100 m³ and the total mass approx. 18.5 t. The energy supply for Salyut 1 and 2 was provided by four rigid solar cell surfaces (folded in at take-off) with a span of about 10 m, two of which were attached to the front lock section and two to the stern section. From Kosmos 557 onwards, three rotatable solar panels that could be aligned to the sun were used on the front work section, each 6.6 m in length. What they all had in common was that the middle section and the rear section were available to space travelers as living space and for scientific and technical equipment. An engine for orbit maneuvers and another coupling connection were also attached to the tail section. The sections, which were equipped with a coupling nozzle, could be hermetically separated from the rest of the station and thus served as an air lock . At the first stations, the Soyuz spaceships served not only as a means of transport, but also as a place to relax and sleep.

The last two Salyut stations (6 and 7) were a little heavier than the previous five at 18.9 t and also differed in structure. A second coupling piece was installed in the rear section. For the first time, two spaceships could be coupled to a space station at the same time, so that visiting missions could stay in the stations in addition to the regular crews. It was also possible to exchange the spaceships so that the mission duration of the regular crew could be extended over the lifetime of a Soyuz spaceship. In addition, Progress cargo spacecraft were able to dock at the station to replenish supplies and to dispose of waste when it burns up in the earth's atmosphere. The engines of the coupled Soyuz or Progress spaceships were also used for orbit corrections.

A Proton launcher was used to launch the stations .

Salyut 1 was launched on April 19, 1971 and was the first space station . Soyuz 10 carried out a coupling maneuver with the station, but the crew could not enter it. The only cosmonauts who were on board were the crew of Soyuz 11 , who died on return because of an open air valve. The station was manned for a total of 24 days and after 175 days in orbit it burned up in the atmosphere on October 11, 1971. Salyut 1 essentially consisted of an empty Almas hull and many Soyuz components, including a complete service module at the stern.

The second civil space station of the Soviet Union was to be launched on July 29, 1972. Due to a fault in the Proton launch vehicle used , an explosion occurred that destroyed the space station shortly after it was launched.

On April 3, 1973, the prototype of the top secret Almas military station was launched. To disguise the true nature of the station, a Salyut designation was also given. The station initially reached the intended orbit. After two days of unmanned flight, a sudden loss of pressure on board the space station was registered, and gradually all instruments failed until there was a total loss of control on April 29th. Salyut 2 then crashed on May 28 of the same year without a crew on board. The failure was likely caused by the fact that the residual fuel in the burned-out third stage of the Proton launcher had exploded and debris from the explosion hit the Salyut 2 at high speed.

The third civil space station was launched on May 11, 1973. It could not be stabilized in orbit and burned up on May 22, 1973. That is why it was "only" given one name from the Kosmos series .

An NR-23 rapid fire cannon originally designed for aircraft is said to have been used on this mission . Shortly before reentry, at the end of the mission, a few shots were fired to investigate the spacecraft's behavior towards the recoil of the cannon. There is no official information about this attempt.

A return capsule with footage of Salyut 5

Salyut 6 was launched on September 29, 1977 and was the first refuelable space station, thanks to the first built-in second coupling socket at the rear (thicker) end of the main module. In addition to crew swaps, this made it possible to dock supply spaceships of the Progress type , which brought food as well as oxygen and fuel into the station. Garbage from the cosmonauts living on board was picked up and burned up when the supply spaceships re- entered the earth's atmosphere .

Due to the possibility of supply and disposal, the station had a much longer useful life and remained in space for almost five years until it burned up on July 29, 1982. A total of 16 teams visited Salyut 6. With this space station, space travelers from friendly countries were invited for the first time as part of the Interkosmos program to take part in Soviet space flights, including the first German in space, Sigmund Jähn , who took off on August 26, 1978 for the GDR .

With the docked module Kosmos 1267 ( TKS 2) Salyut 6 was the first modular space station. The station was manned for a total of 685 days.

Model of the Salyut 7 station (without solar panels) with a docked Soyuz spaceship and a Progress transporter
→ Main article : Salyut 7

With the docked modules Kosmos 1443 and Kosmos 1686 ( TKS 3 and 4), Salyut 7 was again a modular station. After the launch of the central module of the new Mir space station on February 19, 1986, parts of the equipment from Salyut 7 were brought to Mir by a visit from Soyuz T-15 . Soyuz T-15's flight from Mir to Salyut 7 and back to Mir was the first spacecraft flight between two space stations. After that, no more cosmonauts started at Salyut 7.

On February 7, 1991, the space station entered the earth's atmosphere and partially burned up. Fragments of the station fell over Argentina.