Heel refers to the inclination of watercraft to the side, i.e. a rotation around the longitudinal axis . The heel is a short-term or at least controlled rolling movement that tilts the ship. The term list is used when the lateral position is undesirable and potentially dangerous. The so-called capsize angle refers to the angle (based on the normal position) at which the ship capsizes - a life-threatening situation that must therefore be avoided by all means.

"Riding out" to reduce heeling 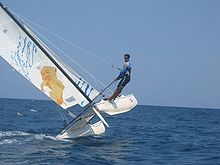 Small catamarans can be sailed on a hull when heeled.

The heel or list can have various causes. Some of these are perfectly normal at sea and, to some extent, inevitable. The resulting inclination is harmless for the ship and its crew, provided it remains within the limits specified by the type of ship. Engineers use extensive stability calculations to anticipate and plan the angle of capsize so that it will not be reached under the conditions intended for the ship.

Heeling torques (also called moments for short) on the ship are caused by:

Nowadays the heel angle is measured with an electronic or mechanical inclinometer which is rigidly connected to the hull.

The heel measurement can also be carried out with one or more perpendiculars , which are distributed over the length of the ship. The plumb line must be at least 3 m and should not be more than 10 m, because longer plumb lengths can decrease the reading accuracy due to natural oscillations of the plumb bobs. The plumb bobs should hang in water boxes. To prevent the perpendiculars from oscillating, damping surfaces must be attached to the perpendiculars. The angle of heel is determined from the length of the plumb line and the deflection of the plumb bob, which is read on a measuring stick placed over the water box.

A severe heeling can lead to the ship capsizing . Either the heeling results in water ingress or the cargo slipping, or the forces acting on it are so great that the righting forces of the hull are no longer sufficient.

In sailing ships and yachts, the keel acts as a counterweight to counteract heeling. This contains up to 50% of the mass of the ship and thus causes a righting moment. A certain heeling - depending on the design of the ship and wind strength of 20 to 45 ° - is completely normal for these ships and does not pose any risk to the ship.

The stronger the heel, the stronger the righting moment of the keel becomes due to the lever law (principle of the standing man ). Monohull sailing ships straighten themselves up to a heel of 120 ° or more, so they can actually capsize only in very high waves. Keelboats are therefore considered to be safe from overturning.

In catamarans or trimarans , the eccentric floats allow a greater value for the displacement of the center of lift and thus generate a righting moment. Catamarans capsize when the heel reaches 90 °. Dinghies do not have a keel, but only a sword, which usually has little mass. Therefore, the crew must counteract the heel by riding to windward .

In keel boats as well as catamarans or dinghies, the heel can be reduced by having the crew "sit on the high edge", that is, sit on the railing on the windward side, or by reducing the sail area ( reefing ).

With constant forces, a floating ship always assumes a position of rest by itself. Against the weight of the ship there is always a correspondingly large buoyancy force caused by displaced water, whereby this buoyancy force is always perpendicular (in the z-direction, corresponding to the acceleration of gravity ):

If one looks at a ship lying at rest, one can think of three axes of a local orthogonal system:

If forces attack that are not perpendicular, the ship will start moving; The floating ship is a freely movable body with six degrees of freedom , so it can perform six different movements individually or in combination:

Simple example, the movement forwards: If a drive - a propeller or a pair of belts - exerts a force F in the x-direction on the ship, it is moved forwards.

The heeling (rotation around the x longitudinal axis) occurs when an additional force (from load or wind) in the y or z direction does not go through the center of lift A and thereby generates a moment around the x axis. This moment causes the ship to turn around the x-axis.

This moment turns the ship around the x-axis. This shifts the lift point A and the weight point G of the ship by the distance and . This results in two new moments that can counteract the moment and thus bring the ship into a new equilibrium . For a state of equilibrium it must apply that the sum of the moments is equal to zero:

Then it must be for the ship with the container

be valid. ( and result depending on the construction of the ship)

If the changed swimming position on smooth water is caused by a constant force or the distribution of the load, the static terms are used (here: heel). The effects of waves and gusts of wind cause vibrations (here: rolling vibration).