An inclinometer (also inclinometer , gradient knife , Clinometer , Gefällsmesser , altimeter , inclinometer or clinometer ( English clinometer )) is a measuring instrument for measuring the slope or angle measurement in civil engineering , in the aerospace , shipping , military entity (Artillery) and also partially in Transportation. The heights of trees, structures, masts etc. can also be determined indirectly (calculation of the height from the measuring distance and vertical angle with the help of angle functions ).

The angle scale is usually divided into degrees and percent ( slope ), with more sophisticated devices also in further degrees (e.g. gon or mil ). If a ruler can be connected, the measuring table is in miniature . 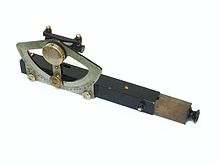 The simplest design consists of a pointer pointing downwards (vertical) under its own weight, which indicates the angle on a scale. To prevent vibrations, it may have damping. The horizontal is determined by a reference side of the measuring instrument. The accuracy of the slope meters is about a tenth of a degree in the top devices (e.g. from Meridian), and about 0.5 ° in the simpler ones.

Digital inclinometers work with the help of acceleration sensors , which measure the acceleration in the earth's gravity field, an electronic circuit for processing the measurement signal and a digital display. [Receipt?] 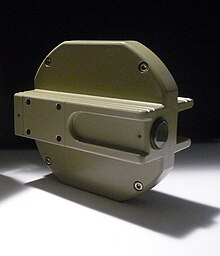 There is a fairly manageable number of manufacturers and types worldwide. These often look different and have either a rod-shaped or a circular pendulum body.

In another design, the inclinometer itself forms the pendulum body. It is a round profile with an imbalance so that the inclinometer rolls on an inclined plane and assumes a position of equilibrium depending on the slope. The special feature of this type is that it does not have any moving parts. 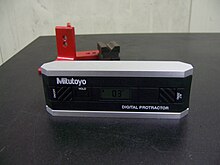 Use of inclinometers in shipping

The inclination of a ship ( " heel "), by movements of the rudder are affected and sailing ships in addition by the Anholen and easing of sailing. Ships are tilted by cross wind. The more constant a ship's angle of inclination, the less energy it loses from rolling. The heavier and wider a ship, the longer its roll period (its reciprocal value is the roll frequency).

The more precisely the helmsman knows the amount of heel and the roll period, the more constant he can - through steering movements - keep the inclination of the ship. At a constant incline, the ship's fuel consumption is minimal; rolling costs energy. Ships can maximize their speed by minimizing taxiing. There are electronic inclinometers that calculate the rolling period to the second and display it continuously. The computer control system also regularly creates a trend diagram for heel and roll amplitude and gives an alarm if the ship tips over to one side.

Some ships have fin stabilizers . To control them, information on the angle of inclination or roll period is required.