from Wikipedia, the free encyclopedia
This is the sighted version , flagged on April 15, 2020 . There are 3 pending changes that have yet to be viewed. 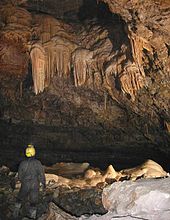 The Ogof Craig A Ffynnon cave in Wales

Speleology ( Latin spelaeum , cave (poetic from the Greek root τό σπήλαιον to spaelaion = the cave) ' and -logie ) is the technical term for cave exploration / caving.

Areas of work and tasks

Excavation of a slogged passage in Wuppertal

The aim of speleology is to research (and protect) caves and karst phenomena .

Speleology is an interdisciplinary science that brings together many areas, including:

One of the main tasks of the speleologists is to find new parts of the cave and to measure them , as well as cartography taking into account the cave environment. In addition, water levels , water temperature , cave wind , air composition, air pressure or air temperature are measured. This can be done manually or with automated sensors that save their results or send them to the outside via a cave link . The results are collected in specialist journals and in the cave cadastre .

The starting point of the research is often the cave exploration , which includes highly specialized methods such as single rope technique (SRT) and cave diving as practical speleology . In practice, cave explorers spend a lot of time making caves "passable", in other words making sure that a person - often sobbing (crawling) - can enter as large a part of the cave as possible. To this end, sediment has to be dug out of silted passages or boulders removed under the most difficult working conditions .

There are very few professional speleologists. Often it is geologists who carry out research projects for universities. Most speleologists are hobby researchers who have acquired their knowledge individually and often work together with professional researchers from different disciplines. In many speleological associations, scientists also work in their spare time. Some famous names are on the list of speleologists .

In addition, speleologists often have various qualifications known from alpinism ( climbing , rope technique), as well as other skills such as cave diving , surveying technology , cave rescue and emergency medicine.

The basic equipment of a speleologist usually consists of a rockfall helmet with a permanently mounted headlamp . Here lamps with LED technology are on the advance; Occasionally, however, carbide lamps are still used, which are usually combined with a battery or accumulator lamp. Above all, the Schlatz (an extremely robust overall), which is combined with underwear, gloves, mountain boots or rubber boots with treaded soles, a sanding bag (a particularly heavy-duty backpack that can be "sanded down" in tight spaces) and emergency equipment is essential.

Any additional equipment depends in particular on the objective, length of stay and the type of cave:

For expeditions lasting several days, an extended supply of food as well as a sleeping bag and often a sleeping mat are also required. Since radios do not work underground, special systems such as Cave-Link are used. 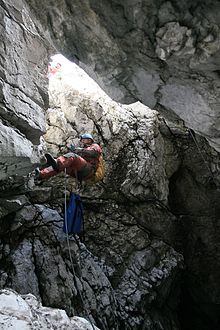 Since many places in caves cannot be climbed in the classic style due to wetness and mud or safety is the top priority in the cave, these are overcome with the help of technical aids. Up until the 1970s, shafts were often negotiated with the help of wire rope ladders. These are very heavy compared to ropes, apart from that they also had to be secured with a rope. Above all, climbing down on wire rope ladders is tedious and dangerous.

Nowadays, driving in shafts is much easier and safer. The personal equipment consists of a cave seat belt , chest belt , safety set ( cowtail ), chest ascender , hand ascender with ankle loop and descender. With self-locking abseiling devices or so-called “racks”, manholes can be descended safely, quickly and, above all, effortlessly. With the ascenders it is quite strenuous, but at least very safe to go up again.

The ropes that are used are special static ropes (“Speleo ropes”), the sheath of which is woven more densely to protect against wear and dirt, and which, in contrast to the ropes used in classic mountain climbing, are very small Exhibit elongation. Speleo ropes may therefore only be used for static securing in addition to abseiling and climbing.

Different methods of mapping are used: In smaller caves, a measuring line is often used, which is stretched between two points. A hanging compass , the so-called hanging device, is hung on this cord , the inclination of the measuring section is measured with an inclinometer (clinometer) and the length is determined with the measuring tape. In alpine caves, direction finding methods are more likely to be used. For this purpose compass, including inclinometer and robust laser distance measuring devices, which can withstand the difficult conditions (temperature, humidity, moisture, dirt), are used. The surveying group, which usually consists of 2–4 speleologists, often faces considerable problems. In addition to dirt and moisture, the narrowness often means that measured values ​​are difficult to read. Metal objects in the equipment - and also in the helmet lamps - can distort the compass measurements. Aiming at the next measuring point while climbing or swimming must hold at the previous measuring point, can require considerable acrobatic skill. Even when working with several pairs of gloves, it can almost never be avoided to transfer significant amounts of clay and moisture to measuring devices and sketches.

Inclination, length and azimuth (compass angle) form a polygon . When measuring, many polygonal lines are strung together ( = polygonization ), which are also transferred to a plan. The on-site draftsman also records aisle widths, outlines, cave contents, other special features, etc. on the plan. The paper-based sketch cannot yet be completely true to scale because, as a rule, not all measurement trains are correctly projected from three dimensions to two dimensions when drawing: One A measuring section of about 7 m with a 45 ° gradient would have to be drawn in on a true-to-scale two-dimensional plan with a length of about 5 m. With a completely digital measurement, the sketches are drawn directly on a PDA with a touchscreen.

The sketch and the electronically or on paper recorded polygons are used to create a true-to-scale construction drawing. With the classic cave plan creation, the actual cave plan is now drawn on the construction drawing with tracing paper and ink. Hand-drawn cave plans can show a considerable amount of detail and show the "furnishings" of the cave in many nuances.

When working digitally, a true-to-scale construction drawing can be created automatically from the measuring trains. Together with scanned sketches or the digital sketches from the PDA, these serve as a basis for creating a cave plan using PC software. Here come CAD programs, vector graphics programs with extensions (eg. As Inkscape with Caveink ) or special programs for the cave map creation (. Eg Therion and CSurvey ) are used.

In both types of plan creation, internationally standardized signatures are generally used, which make it easier for all cave explorers to understand the plan. In hand-drawn cave plans, however, these signatures are extremely complex to create. Digital cave plans usually allow faster and more flexible work.

UIS classification of the accuracy of cave plans

You can't see how accurate a cave plan is. A nicely drawn plan can be based on an inaccurate survey or design drawing or vice versa. Therefore it makes sense to indicate the accuracy of the survey and the draft drawing, for which there is an international standard of the UIS (International Union for Speleology - Working Group for Cave Surveying and Plan Representation of the Computer Science Commission).

As a shelter, as eerie, lightless places or as a possible access to another ( sub ) world, caves have always been a fascination. Even the Stone Age man invaded caves 40,000 years ago and made cave paintings . With the Enlightenment began a systematic occupation and with it a scientific understanding of the formation of caves. Only the technical possibilities of the 19th century finally made it possible to penetrate deeper cave areas (e.g. Dragon's Cave in Mallorca in 1880 ). In 1965, a global umbrella organization was founded with the International Union for Speleology .

In addition to the general alpine dangers in active water caves, there is a risk of being locked in during floods and, in the worst case, of drowning. However, this danger can be effectively countered by simple precautionary measures, such as visiting such caves only in safe weather conditions, possibly only in winter when there is severe frost.

The possibility of getting lost, which laypeople often perceive as a particular danger, is extremely low with appropriate experience and can be further minimized by taking additional precautionary measures. In the case of particularly large caves, a cave map can be carried along to effectively prevent getting lost. During the first visit , the cave plan is created and continuously updated. The exact memorization of the corridors is also helpful, but is correspondingly ineffective with complex corridor systems. In addition, markings can be made by cairns or glow sticks can be used, which are collected on the way back. In the case of water caves in particular, a mostly neon-colored guide cord is used to show the way to the entrance.

The greatest danger lies primarily in the possibility of injury and secondarily in the resulting, possibly life-threatening hypothermia (see, for example, the accident in the giant things cave ). If necessary, there is almost always the possibility of helicopter transport on the earth's surface. In the interior of the earth it looks completely different: The transport of a person with a fractured pelvis, for example, can be very difficult and lengthy. Especially in caves with many bottlenecks, overcoming a few hundred meters can turn into days of martyrdom for the injured and his rescuers. Cave clubs therefore maintain specially practiced and trained cave rescue teams , which are recruited from the club's active cave explorers.