The climatology is an interdisciplinary science of Subjects meteorology , geography , geology , oceanography and physics . She researches the laws of the climate , i.e. the average state of the atmosphere at a location and the processes that take place in it. For this purpose, climate science makes use of statistical methods, among other things .

Climatology deals with atmospheric phenomena of different spatial and temporal orders of magnitude. Because the large spatiotemporal differences also result in differences in the methodology, a three-stage classification of the standards has proven itself.

The time scale fluctuates between a few minutes of microturbulence, daily and monthly changes in the seasons, to trends over the years, such as global warming .

In climatology, areas with similar climatic conditions can be assigned to climatic zones according to different systems (classifications) . The air classification after Koppen this purpose uses the mean annual temperature - and the precipitate distribution, shown in a hygrothermal climate diagram . The individual zones are provided with a two to four-digit letter code. As the boundary of a climate zone, Wladimir Peter Köppen suggested the natural distribution of certain typical plant species.

Climatology and climate research is not a sharply delimited, closed science, but rather, as a primary branch of meteorology and geography, deals with the physical phenomena of the earth's air envelope and its interaction with the conditions of the earth's surface in space and time.

There are four sub-disciplines of climatology:

In addition, many specialist areas or sub-disciplines of climatology have developed. However, some of these overlaps are often the subject of scientific work, so that fixed names have been established that can usually be assigned to the specific climatology.

Climatology uses models to describe complex phenomena. These models are also used as computer models to estimate the effects of climate change in various scenarios .

The climatological models are used to find possible trends and weight individual factors. 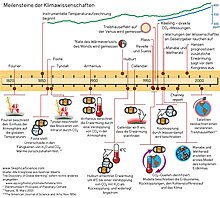 Milestones in climate science since 1800

The state of research in climatology is summarized and published by the Intergovernmental Panel on Climate Change (IPCC) at regular intervals. It also contains brief summaries of key messages for policy makers.

In addition to the IPCC, the American Association for the Advancement of Science - the world's largest scientific society - shows that it is indisputable in climatology that man-made climate change is taking place and emphasizes the consensus that prevails on many aspects of climatology.

Portal: Weather and Climate  - Overview of Wikipedia content on the subject of weather and climate