The scenario technique is a method of strategic planning that is used in politics , science and business . The aim is to analyze possible developments in the future and to present them coherently. It describes alternative future situations and ways that lead to these future situations. Scenarios set up hypothetical consequences of events in order to draw attention to causal processes and decision-making moments. In addition to showing how a hypothetical situation can come about in the future, variants and alternatives are shown and the options available at each stage for different actors to control the further process. The scenario technique pursues the analysis of extreme scenarios (positive extreme scenario / best case scenario , negative extreme scenario / worst case scenario ) or particularly relevant or typical scenarios (trend scenario). Scenario technology is still used in psychology and psychotherapy ( psychodrama , sociodrama). This is about both future and past scenarios.

Background and use cases

The scenario technique with originally military roots has meanwhile found possible applications in economic and social issues. The preferred areas of application are:

Scenarios are often presented in the form of a scenario funnel. The starting point of the observation is the trend scenario, which is spanned on a time axis. This trend scenario represents the future development assuming stable environmental developments ( ceteris paribus ). Since, as a rule, however, unstable environmental conditions must be assumed, both positive and negative development opportunities are taken into account.

Due to the increasing distance from the present and the associated possible deviations from the trend scenario, the range increases over time. The extreme scenario that shows the best possible development ("best case") represents the upper end of the funnel, whereas the so-called "worst case", i.e. the worst possible development, forms the lower end. 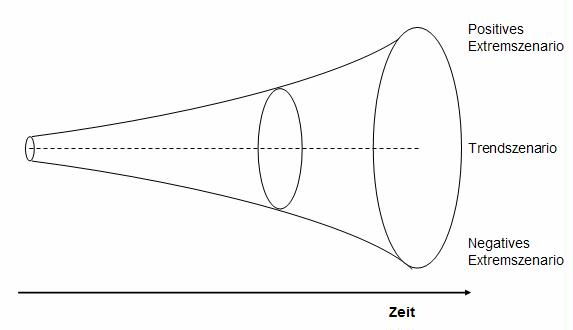 The scenario funnel is narrowest in the present. At the starting point, the relationships in the system under consideration and the factors influencing them are known. However, even when looking at the present, there are different views of reality that are shaped by different assessments. An essential element of scenario thinking is the realization that the future perspective is often narrowed down from a specific optic of the present and that this limit has to be jumped over if the field of possible alternatives is actually to be illuminated. The funnel illustrates the conceivable space of plausible futures that can be mapped with scenarios. Developments and events can have an effect on this funnel over the course of time, which, under today's circumstances, have an extremely low plausibility, but which cannot be ruled out and can have a major influence on the development. One speaks of wildcards or discontinuities.

The output of this phase is a detailed description of the task and problem as well as a list of factors.

The influence analysis examines how the individual factors influence each other. This can be determined with a network table. Here the descriptors are compared to one another. In a direct comparison, it is determined which influence (no, medium effect, high effect) one factor has on another factor. The active and passive effects can then be cumulated and the factors compared with one another in an influence matrix. (This step is also found in Frederic Vester's sensitivity model ).

The output of this phase is the networking table and an influence matrix as well as an overview of the size of the influence of the individual factors. With the help of this, the usually very large number of influencing factors can be reduced to a manageable number if only the most influential factors are selected.

Possible scenarios arise from the mathematical combination of the various factor characteristics. For example, you combine the first value of the first factor with the second value of the third factor: "Factor 1 education" with the value "Overall high level of education in society" is combined with the value of factor 3 "Technology understanding" "Overall high technology understanding". However, since not all combinations are sensible or even mutually exclusive, or several combinations can be combined due to their similarity or meaning, it makes sense to bundle the alternatives and restrict the further investigation to selected scenarios or alternative bundles. In order to be able to work effectively with the scenarios, it makes sense to select a number of four to eight scenarios. Usually, at least the two extreme scenarios, the trend scenario and possibly a few selected scenarios will be considered further. With the help of an interaction analysis, connections between different events that may occur in the future can be displayed, analyzed and examined for their mutual effects. In this way, the previously identified, possible scenarios can be examined for their plausibility.

The output of this phase are the possible characteristics of the individual factors / descriptors, as well as their combination / bundling into different scenarios. Subsequently, a description / formulation of the scenarios is recommended in order to make them more understandable and easier to communicate.

The selected scenarios will be further examined in this phase. The scenarios are compared with their estimated probability of occurrence and the opportunities and risks associated with the respective scenarios. In addition, the scenarios with regard to the current situation (which scenario are we in?) And the expected situation (where does the future develop) can be assessed. After this consideration, companies can define measures / options for action for the individual scenarios in order to prepare for them. A company can also use scenarios to review its strategy. If it finds that its current strategy is not successful in any of the scenarios developed, the strategy must be adjusted. In this case, scenarios help in finding a future-proof strategy.

The output of this phase is evaluation and comparison as well as derived options for action and measures of the selected scenarios.

The methods for developing and analyzing possible future developments range from purely qualitative approaches based on the plausible description of development paths through the heuristic application of ordinal values ​​on a rating scale to purely quantitative methods such as factor analysis. The transition from the qualitative to the quantitative approach is formed by the controversial thesis that when using at least four different values, the users implicitly assume an interval scaling. If this thesis is affirmed, then one can start from an interval scale level and also apply quantitative methods. If one denies this thesis, then one remains purely qualitative.

Combination of Delphi and scenarios

This section needs to be revised. More details should be on the discussion: Scenario Technique # Delphi Scenarios vs. Scenario Delphis . Please help to improve it , and then remove this flag.

In recent years, researchers and strategists have increasingly combined two methods of foresight: the scenario technique and the Delphi method . Depending on which of the respective methods remains dominant, one speaks of Delphi scenarios or Scenario Delphis. Both combinations allow the individual methodologies to be improved by adding up the benefits. In practice, one of the two techniques is identified as the overarching methodology and the second integrated at a specific phase.

The (1) integration of the Delphi method into the scenario process is more common than (2) the development of scenario-based Delphi surveys. In the literature, this (1) type is discussed as Delphi or expert-based scenarios (see Rikkonen, 2005; von der Gracht, 2008;). Current research shows that the validity, acceptance, plausibility and consistency of scenarios can be increased enormously by integrating expert knowledge into the process using Delphi surveys. The Delphi technique can be used particularly in the scenario phase of trend projections. Expert knowledge about the future is systematically recorded by a Delphi survey and can thus be used as input for generating alternative scenarios. Based on the opinion of a Delphi panel, relevant events and developments can be assigned probabilities of occurrence. Furthermore, through a Delphi survey, central lines of argument and extreme developments can be identified for the scenario creation process.

A scientifically sound process for creating Delphi-based scenarios can be found in von der Gracht (2010).