Clear skies are a redirect to this article. For the film of the same name, see Klarer Himmel (film) .

In meteorology, cloudiness or cover is the name given to an accumulation of condensed water in the earth's atmosphere that is visible to the naked eye and does not touch the earth as a whole. Clouds should therefore be differentiated from both fog and haze , which is formed by floating, solid particles in the air.

Individually recognizable elements of the cloud cover are referred to as clouds . The extent to which the sky is covered with clouds is usually estimated by the weather observer, and nowadays also determined by special sensors or weather cameras . The data from weather satellites , however, can only be used regionally. Most weather stations use the eighth-note division specified in the synoptic . One then speaks of the unit of measurement "octa". 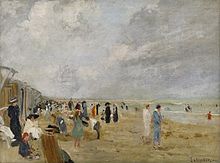 A cloudy sky in the fine arts: the painting “At the Beach” by Ernst Oppler , around 1905

While the degree of coverage was often estimated in tenths in the past, nowadays it is usually given in eighths (see table on the right).

In everyday language , "overcast" or covered is often supplemented by cloudy , when the clouds not only cover the whole sky , but are also dark or have a high level of humidity .

Classification of the aviation weather service

The aviation weather service sums up the eighth notes: The best weather condition is “clouds and visibility okay” ( CAVOK ), the almost cloudless sky was previously with “sky clear” ( SKC ), today with “no significant clouds” ( NSC ) for no clouds below 5000 ft or no significant clouds or “no clouds detected” ( NCD ) for automatic stations. This is followed by "few" (FEW) for slightly cloudy , then with 3–4 eighths of "scattered" (SCT) or loosely cloudy , 5–7 eighths of "broken" (BKN) for broken cloud cover and 8 eighths of "overcast" (OVC) for a dense, closed cloud cover . Also 9 eighths “obscured” (OBSC) if the sky is not visible.

Classification of the CIE

The International Commission on Illumination defines the sky state as a function that depends on the height of the sun .

These sky conditions are partially used for the calculation of daylight quotients; They are also important for daylight planning and in photography for determining the color temperature , which changes depending on the degree of cloudiness.

The following standard lighting situations can be created through the defined value assignment of the five luminance gradation parameters (a ... e):