There are 51 weather stations in Germany, 29 of which are staffed around the clock and the remaining 22 are temporarily manned by specialist staff. The constantly manned stations include 16 meteorological stations at international airports that issue special weather reports for the meteorological service. A special position among these 51 weather stations are the so-called climate reference stations, at which the German Weather Service carries out parallel measurements in order to enable a comparison between previously (operationally) used measuring technology and new types of automatically working sensors. 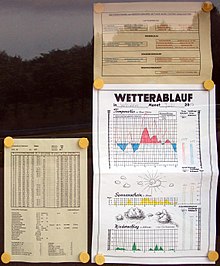 Public notice in front of the control room

The weather stations form a less dense network of measuring stations for regular synoptic observations of:

Information about the current weather is also provided at the stations and - depending on the location - weather advice for special customers. For larger institutions or a large group of customers, a separate meteorologist can be responsible for these inquiries in addition to the duty officer .

In addition to the weather observation by the automatic measuring sensors, the data for the visibility , the type of cloud and the degree of coverage as well as the weather condition are determined by eye observation by the employees. Selected weather stations also carry out phenological observations and height measurements with weather balloons (aerological ascent with radiosondes ).

In contrast, the 131 full-time weather stations work fully automatically, i.e. without staff, record fewer meteorological values ​​and have no or smaller climatic gardens.