DWD is a redirect to this article. Further meanings are listed under DWD (disambiguation) .

The German Weather Service (DWD) is a higher federal authority based in Offenbach am Main, Hesse . The German Weather Service is a public law institution with partial legal capacity in the business area of ​​the Federal Ministry of Transport and Digital Infrastructure ( Section 1 (1) DWDG ). The higher federal authority is the national civil meteorological service of the Federal Republic of Germany . It provides meteorological services ( weather forecast ) for the general public or individual users, such as shipping , agriculture or science.

The main task is to warn of weather-related dangers as well as to monitor and document the climate in Germany and to evaluate its changes. The DWD also operates the national climate archive of the Federal Republic of Germany and, with the German Meteorological Library, has one of the largest specialist libraries on the topics of weather and climate worldwide. There is constant contact with the federal government , federal and state ministries, municipalities, business and industry for advice and cooperation. The legal basis for the DWD is the law on the German Weather Service ( DWD law ). The DWD is a member of the working group of departmental research institutions .

To fulfill these tasks, the DWD is divided into the following areas: 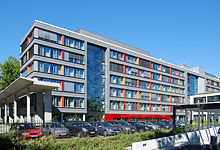 Headquarters of the DWD in Offenbach 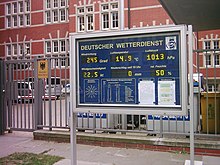 Weather information board at the regional headquarters in Hamburg, on the left in the background the former DWD official sign 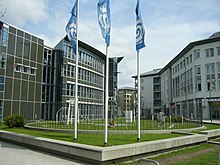 In addition to the head office, there are six regional head offices located in Hamburg , Potsdam , Leipzig , Essen , Stuttgart and Munich . In addition, the DWD operates the densest and largest meteorological monitoring network in Germany by 51 full-time staffed weather stations , including 16 Aeronautical Meteorological and 131 full-automatic weather stations . The part-time monitoring network of the DWD comprises 1794 stations that are supervised by volunteer weather observers.

In 2015, the DWD opened the first urban climate station at Berlin's Alexanderplatz to get readings from the densely built-up cities in which more than 70 percent of the population lives and works. Compared to the measuring stations in the surrounding area, the temperatures in these heat islands can be up to 10 ° C higher. The aim is to react better to climate change. In 2018, the fifth of a total of ten planned urban climate stations was opened at the DWD site in Freiburg im Breisgau .

City climate station of the German Weather Service in Freiburg

One of the full-time automatic weather stations ( Appental ) of the DWD in Meßstetten at 899.5 meters

The DWD was founded in 1952 by merging the weather services of the various Western Allied occupation zones . The first president was Ludwig Weickmann , but due to his advanced age he was replaced by Rudolf Benkendorff the following year . He stayed in office until 1960 and had a decisive influence on the first few years. In 1954 the Federal Republic of Germany joined the World Meteorological Organization .

From 1955 to 1957 the head office was built on Frankfurter Strasse in Offenbach. The design by Paul Friedrich Posenenske was characterized by a separation of the outer walls and the load-bearing structure, which was emphasized by the staggered ribbon windows and is considered an "important building of German post-war modernism ." The building, which soon became too small for the requirements of a modern weather service, became after More than ten years of planning demolished at the end of 2004 to make way for a new building. The new headquarters designed by Michael Frielinghaus was inaugurated in September 2008 and since then has housed the entire workforce of the Offenbach location, which at the time comprised around 900 employees, in one central building. Three woodworks by the Frankfurt artist Thomas Bayrle were installed in the inner courtyard of the building complex .

Since 1960 the DWD itself has not been active in the German "television weather" - the Hessischer Rundfunk took over this task for the ARD . In the meantime, all German television stations in Germany organize their weather programs either with their own weather editorial offices or with the help of external service providers. The DWD only supplies the observation and forecast data that serve as a basis for the work of the local meteorologists.

In 1966, the DWD installed its first supercomputer , a CDC 3800, and began producing a numerical weather forecast on a daily basis.

In 1975 the European Center for Medium-Range Weather Forecasts was established in Reading to produce forecasts of up to ten days.

In 1990 the DWD integrated the Meteorological Service of the German Democratic Republic .

Since the 1990s, the number of manned weather stations in the German Weather Service has been continuously reduced, which inevitably has resulted in a considerable reduction in staff . In the opinion of the DWD, quality losses are not to be feared, since modern remote sensing instruments such as weather radar or weather satellites, with their area-based measurement, ensure a significant improvement in the observation data.

Since 1999, the DWD has been the world's first weather service to operate a global, operational weather model called GME .

In 2006 the data processing and visualization system NinJo was introduced, which was created as part of international cooperation. The Offenbach Weather Park was inaugurated on July 15, 2005 .

In 2008 the new DWD headquarters was opened at the same location - Frankfurter Strasse. The old building from the 1950s had to give way as it would have had to be completely rebuilt due to new safety regulations. In addition, the new building created sufficient space for the employees who were previously housed in rented offices, as well as for the new mainframe computer.

From March 2009 on, the DWD operated an NEC SX-9 high-performance computer with a peak performance of 109 TFLOPS to calculate weather forecasts.

By the end of 2013, the DWD had switched its 16 stations of the radar network from operational network radars with quality assurance radars to dual-polarization radar devices. A 17th station in Niederrieden near Memmingen was already put into operation in 2011 . In 2014/2015, the DWD reduced its staffed weather stations from 70 to 51 locations.

In 2014, the previous high-performance computer was replaced by two new supercomputers from Cray for calculating the numerical weather forecast for 24 million euros, each providing 550  teraflops and enabling the use of a more precise forecast model.

At the beginning of 2015, GME was replaced by the new ICON developed with the Max Planck Institute for Meteorology , which is operated both globally and on a section of Europe. In addition, COSMO-DE is a fine-scale, regional weather model that covers Germany, Austria and Switzerland.

At the end of 2016, the Cray high-performance computers were expanded to a peak performance of 1.1 petaflops each .

Play media file
Video: How is a weather forecast made?

The DWD publishes its weather warnings for the public on the Internet. These include, for example, storm warnings, warnings of severe thunderstorms or snowfall warnings. As part of the basic supply, the German Weather Service offers a free daily weather report for Germany, which can be subscribed to by email. The current weather situation is indicated on the DWD website for the individual federal states.

Since 1952 he has been creating and distributing sea weather reports and forecasts via the sea weather service. The German Weather Service has also issued regional heat warnings since 2005 . The warning system aims to reduce the number of deaths and illnesses in the heat. The reason for the development of the warning system was the heat wave in Europe in 2003 , in which more than 3,500 people in Germany alone were probably victims of the high temperatures.

Since 2006 it has been possible to subscribe to the DWD's pollen warnings via the website as an e-mail newsletter. The German Weather Service also publishes the Kostra heavy rain catalog .

Evaluation of the German Weather Service on temperature development in Germany in the period 1881 to 2018, shown as a deviation from the mean value 1961–1990.

The DWD regularly publishes analyzes of climate developments in Germany. To do this, he evaluates the current measurements from his own measurement network, as well as the data from the predecessor organizations. Systematic and area-wide observations have been carried out in Germany since around 1881, so that the DWD can assess climate change over this period. In the period from 1881 to 2018, this results in a temperature increase of 1.5 ° C (linear trend over the annual area mean values).

According to information from the DWD, 2018 and 2020 were the two years with the highest average temperature (10.5 and 10.4 ° C) since the beginning of nationwide weather records in Germany. 2020 was also the tenth year in a row with an average temperature above the long-term average.

In June 2015, the free WarnWetter app was published for Android and iOS. The app for Windows 10 (Mobile) has been available since March 2017. The official weather warnings and weather forecasts are made available there. This app is viewed by private weather service providers organized in the Association of German Weather Service Providers (VDW) as a violation of § 6 DWDG and therefore illegal. After the VDW failed with an application for an interim injunction based on fair trading law at the Darmstadt Regional Court and in a second instance at the Frankfurt am Main Higher Regional Court , the association brought two main complaints against the German Weather Service in April 2016.

In response , the federal government, in close cooperation with the DWD , initiated a draft amendment to the DWDG in November 2016 that would have expressly allowed these controversial apps. In the legislative process, however, the Federal Council sided with the VDW. In the amended version of the DWDG, the DWD was only required to offer smart services to the extent that they are assigned to the warning of storms and radioactivity or to disaster control. With a ruling of November 15, 2017, the Bonn Regional Court subsequently prohibited the DWD from distributing the WarnWetter app. On December 19, 2017, the DWD first had to implement the provisionally enforceable judgment in the form that certain information could only be permanently activated in the free WarnWetter app for a one-off payment of 1.99 euros.

On July 13, 2018, the 6th Civil Senate of the Cologne Higher Regional Court decided on the appeal lodged by the DWD against the judgment of the Bonn Regional Court of November 15, 2017. The Senate overturned the challenged judgment of the Bonn Regional Court and dismissed the action insofar as it was based on competition law. According to the Higher Regional Court, the provision of the WarnWetter app is certainly not a “business act” in terms of competition law. The German Meteorological Service will act on the basis of its legally standardized task. These statutory tasks also include the provision of meteorological services for the general public as part of the general interest. Since the German Weather Service had acted within the scope of the area of ​​responsibility specifically assigned to it, the application of competition law was ruled out. This applies regardless of the question of whether the WarnWetter app is chargeable and whether it generates income. The administrative court must decide on the public law admissibility of the WarnWetter app, which is also controversial in the proceedings.

On March 12, 2020, the review of WetterOnline was successful at the Federal Court of Justice . The DWD will continue to offer the full version of the WarnWetter app for a fee according to the judgment.