The Federal Motor Vehicle Office ( KBA ) is a German federal authority for the road with seat in Flensburg that the federal ministry of transport and digital infrastructure is under (BMVI).

Furthermore, it does that

Questions and applications regarding old GDR vehicles (for example if an operating permit has been lost) can be sent to the KBA. In addition, the KBA is the German head end for the EUCARIS (European Car and Driving License Information System), which networks the international central traffic registers.

In future, the Federal Motor Transport Authority will act as the national inspection body within the framework of the Prüm Agreement . The KBA is the authority responsible for recalls in the automotive sector that are based on the Equipment and Product Safety Act .

The predecessors of the Federal Motor Transport Authority were three independent authorities:

In 1910, a collection point for messages about drivers of motor vehicles was set up at the police headquarters in Berlin . It essentially recorded the revocation and denial of driving licenses. After the end of World War II in 1945, the Allied occupation authorities relocated it to Bielefeld .

In 1934, a collection point for messages about motor vehicles was set up in the Berlin police headquarters . It recorded all registered German motor vehicles. From 1945 this authority was located in Peine before it was also relocated to Bielefeld in 1946.

In addition, the Reich Office for Type Testing of Motor Vehicles and Motor Vehicle Parts was established there in 1937 . With it, uniform assessments for vehicles and vehicle parts manufactured in series and thus uniform safety standards were implemented. This Reichsstelle was a higher authority and subordinated to the Reich Minister of Transport. 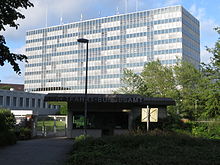 The Federal Motor Transport Authority in Flensburg - Mürwik with the acronym "KBA" on the east side of the main building, 2014

The authority was founded on August 4, 1951 with the passing of the law on the establishment of a Federal Motor Transport Authority and took over the tasks of the three previous authorities. In 1952 the company moved from Bielefeld to Mürwik , a district of Flensburg. With 220 employees, it initially moved into the Bonte barracks near Sonwik . By the end of 1952, the number of employees had risen to 300. Shortly afterwards, a large new building designed by the architect Carl-Friedrich Fischer was erected on Fördestraße. The foundation stone of the skyscraper was laid in December 1961. The new building was ready for occupation in 1965. At the opening on September 7, 1965, the Federal Minister of Transport gave a speech. Since then, the KBA has been located on the southern edge of the military complex of the Mürwik Naval School at Fördestrasse 16. From 1983 to 1988, the lawyer Erika Emmerich was the agency's president.

The establishment of the still new electronic data processing, which was required to process the comprehensive tasks, posed a major challenge. The KBA initially only had one punch card position . The punch card office of the office initially suffered from moisture due to the proximity to water. At the end of the 1950s, the KBA's punch card file was greatly expanded. The humidity problem was apparently solved by the move.

In the 1960s and 1970s, so-called rotary devices were used, each of which consisted of 150 metal plates arranged in a circle, on each of which there were around 200 plastic or paper-coated strips of wood. The registered offenders were written on the strips with their registration numbers, birth names , etc. Each of these rotary devices contained around 30,000 traffic offenders . In 1976, the registration tasks were switched to IT systems. 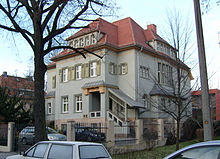 After the political change , with German reunification on October 3, 1990, not only were around one million Trabis registered, but the KBA also took over the automotive engineering office of the GDR (KTA) in Dresden . The Dresden branch, which is now subordinate to the KBA, was assigned to the vehicle technology department.

On August 4, 2001 the KBA celebrated its 50th birthday. The building of the Schleswig-Holstein newspaper publisher has been in the immediate vicinity of the KBA since the 2010s . In 2017, the KBA employed around 1,040 people. 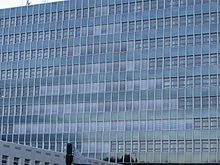 In an interview with the Oldenburger Nordwest-Zeitung in September 2015, the Federal Managing Director of Deutsche Umwelthilfe (DUH), Jürgen Resch , criticized the Kraftfahrt-Bundesamt in connection with the VW emissions scandal : "The Kraftfahrtbundesamt is a bedside rug for the automotive industry. This federal agency has become the extended arm of the automaker. What a descent for a once proud surveillance agency. It is also a service provider who, in return for payment, does certain things for the auto industry. No comparison to the sovereignty of the American environmental agency EPA . "

In July 2019, the DUH criticized the Federal Office in the wake of new findings about limit values ​​being exceeded by Audi and Porsche that it had not intervened against fraudulent exhaust gas cleaning for over three years.