The Federal Customs Administration is a German customs authority part of the Federal Finance Administration and the Federal Ministry of Finance assumed. It includes both the enforcement services and the fiscal administration . The tasks of the customs administration ( the customs ) are: to collect customs duties and various federal taxes, to enforce pecuniary claims of the federal government and federal corporations, to monitor compliance with the prohibitions and restrictions in the cross-border movement of goods, as well as to prevent and prosecute undeclared work and to check compliance with Collective and minimum wages. 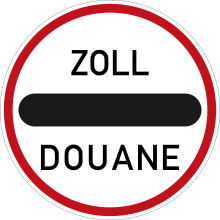 The German Federal Customs Administration, as part of the Federal Finance Administration, ensures the income from federal taxes. These are the so-called special consumption taxes - spirits tax , electricity tax , tobacco tax , energy tax , etc., including the beer tax , the revenue of which is due to the countries, the aviation tax , the nuclear fuel tax , the motor vehicle tax and revenue of the European Union (75% of all customs duties are paid to the EU paid, 25% remain as an expense allowance and go to the federal government).

The tasks of the enforcement areas of the customs administration include the customs supervision of the movement of goods across the German part of the customs border of the European Union ( border supervision ), the supervision of compliance with prohibitions and restrictions in the cross-border movement of goods, the supervision of the cross-border movement of goods subject to excise duty , the protection of the German continental shelf in the North Sea and Baltic Sea (ie the monitoring of submarine mining and prospecting rights) and the fight against illegal work and money laundering . The control unit lake , together with other agencies, the Coast Guard of the Federation . The enforcement areas of the customs administration are working in many areas closely with the police forces of the countries and the Federal together and other authorities. They are law enforcement agencies and are also used to fight terrorism.

The enforcement area of ​​the Federal Customs Administration is assigned:

Close cooperation with other authorities takes place in particular in the federal coast guard and through the following joint investigation groups: 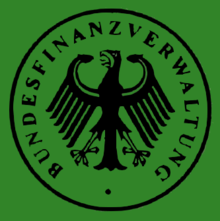 Seal of the Federal Finance Administration

The Federal Customs Administration enforces public-law pecuniary claims of the federal government and direct federal legal entities under public law such as B. the Federal Employment Agency , the statutory health insurance companies , the professional associations and others. The executing officers are enforcement officers and, like bailiffs, have the right to seize property, land and claims and, if necessary, to dispose of them later.

There are regular auctions at main customs offices, which have a field of enforcement. Objects that have been seized or intended for recovery by the authorities are auctioned there. There is an Internet auction portal that can also be used to bid on such goods. In addition to customs, other authorities and administrations also use this offer and auction. Excluded from the auctions are confiscated goods such as cigarettes and other tobacco products, weapons, narcotics, animals and plants.

The third auxiliary stand of the signal manual, which is prescribed as a customs stand .

The signal flag Q is also used as a customs stand in the flag alphabet .

Due to their classic filter function and their police tasks, the enforcement areas of the Federal Customs Administration are often confused with the Federal Police or assigned to it (also the other way around) and always moved in the direction of the police .

Customs officials are legally and formally tax officials as members of the Federal Finance Administration. The law enforcement officers, however, have the status of law enforcement officers in the prosecution of tax crimes and tax offenses, as well as in the prosecution of crimes in connection with the fight against illegal employment (e.g. fraud, illegal residence of foreigners). Customs officers from the enforcement areas ( including the administrative employees within the Financial Control Department ) are also investigators for the public prosecutor's office . In the case of so-called pure tax offenses (e.g. tax evasion in the case of cigarette smuggling), the main customs office also has the legal status of the public prosecutor's office. Following the request of the EU Commission on July 28, 2003 to restructure customs into a goods police, the rather non- customs union GdP regularly discussed whether the enforcement areas of customs should be restructured into a federal finance police (see below).

Structure of the Federal Customs Administration until January 1, 2016

Until January 1, 2016, the German customs administration was organized in the following three stages:

Customs officer on a construction site

Structure of the Federal Customs Administration since January 1, 2016 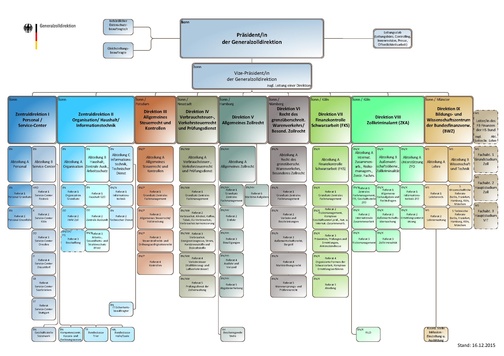 Organizational structure of the General Customs Directorate established on January 1, 2016 .

The interests of the employees of the customs administration by the BDZ German Customs and Finance Union , the police union (GdP) and the United Services Union represented (Verdi).

The Federal Ministry of Finance initially did not want to recognize the GdP. The Hessian Administrative Court ruled with a final decision of December 22, 2008 that the GdP represents the interests of employees in the areas of enforcement of the Federal Customs Administration.

→ Main article : “Union project of the Federal Finance Police” in the article Union of the Police

The police union is the only one of the three unions representing the interests of customs officers and collective bargaining workers to demand a restructuring of all areas of customs enforcement into a so-called Federal Finance Police .

The Federal Customs Administration occurs since 1952 as a promoter of competitive sports and maintains the Customs Ski Team . In the 2016/17 season, the team had 64 members: 54 athletes, eight coaches and two ski technicians. They are divided into the disciplines Alpine skiing (16), biathlon (24), cross-country skiing (17), ski jumping (5) and Nordic combined (2). The athletes include Felix Neureuther and Viktoria Rebensburg as well as Laura Dahlmeier . The sponsored athletes, officials of the Customs Administration in the simple service .

Customs officers also take part in international missions such as EUBAM Moldova / Ukraine , EUBAM Rafah and EULEX , for example (often together with officials from the Federal Police ) to set up infrastructures for border security and control , to secure the collection of taxes , to prevent smuggling and also for training and education of local forces.

In the context of this affair, the Customs Criminal Police Office publicly sided with the Frankfurt customs officer Stefan R. He had prevented the smuggling of nuclear weapon parts into Iran and was due to the Koblenz Regional Finance Directorate responsible for Frankfurt Airport - customs and consumption tax department - based in Neustadt ad Weinstrasse dismissed alleged exceedance of authority. While the Oberfinanzdirektion Koblenz tried to defend the publicly massively criticized dismissal, the Customs Criminal Police Office praised the merits of the dismissed official for defending against a "danger to the external relations of the Federal Republic of Germany". The case caused a stir nationwide and later also attracted attention abroad.