Administration building at Ringbahnstrasse 10-14; behind the Tempelhofer Feld 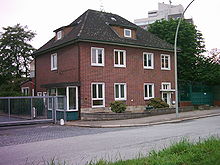 Branch of the federal monopoly administration for spirits in Hamburg

The Federal Monopoly Administration for Spirits ( BfB ), based in Offenbach am Main, was a higher federal authority within the portfolio of the Federal Ministry of Finance , which had the task of administering the spirits monopoly . It was the successor organization to the Reich Monopoly Administration (RMV) founded in 1922 . Following the expiry of the Spirits Monopoly Act on December 31, 2017, the authority was dissolved on December 31, 2018.

In order to steer the uncontrolled production and distribution of spirits at the beginning of the 20th century in an orderly way, the German Reich founded the Reichsmonopolyverwaltung (RMV) in 1922, based in Berlin ; it was subordinate to the Reich Ministry of Finance . The institution had to enforce and maintain a state monopoly for the production of spirits in Germany, above all in order to avert health risks for the population; she also raised the liquor tax . The first drafts of such regulations for alcohol market and agricultural policy had already existed in Prussia. The so-called mash tun tax was introduced there around 1820.

A president headed the RMV; the Reich Monopoly Office was subordinate to him. The Office, which was supported by an advisory board and a commercial committee, was as executive a recycling point . The administration buildings of the Reich Monopoly Administration for spirits were built in 1927 and 1928 based on designs by Paul Renner at Ringbahnstrasse 10-14 in Berlin-Tempelhof .

Until 1949, the RMV headquarters was located on a large area in Berlin-Lichtenberg , between Herzbergstrasse and Rittergutstrasse (today's Josef-Orlopp-Strasse), on which the VEB Bärensiegel Berlin was created.

In 1951, the Federal Monopoly Administration for Spirits was re-established and took over the tasks of the RMV: It initiated the necessary laws, ordinances, and implementing provisions and monitored their strict compliance throughout the entire German federal territory. The headquarters moved from the four-sector city of Berlin to Offenbach. In 1953/54 a completely new building was carried out according to plans by the architect Adolf Bayer . The building has been a listed building since 2010. The vestibule with surrounding galleries extends over four floors and is closed by a colorful glass art window designed by Hans Leistikow .

The Spirits Monopoly Act was subsequently regularly adapted to the current requirements, most recently amended by Art. 238 of the ordinance of August 31, 2015. It ceased to be in force at the end of December 31, 2017 in accordance with Section 166 (1) sentence 2. In six parts, subdivided into numerous other sections, it contains precise provisions on the administration of the monopoly; Production and purification of brandy; Classification of distilleries; Burning rights; Monitoring the manufacture, use, delivery, pricing and collection of taxes for spirits in Germany. - The BranntwMonG is a double law. It regulated the national sub-market regulation for agricultural alcohol as well as the taxation of distilled ethyl alcohol and spirits (spirits tax). The spirits tax is levied by the main customs offices . In 2008, the spirits tax revenue in Germany amounted to around 2.1 billion euros.

The authority should administer the spirits monopoly, which according to its content is a national sub-market organization for ethanol with agricultural and socio-political objectives, its form a financial monopoly according to Art. 105 , Art. 106 and Art. 108 of the Basic Law .

In 1976 the European Court of Justice ruled that the import monopoly that had prevailed up to that point on cheaper agricultural alcohol from other EU member states violated the EC Treaty . Since the production costs for agricultural alcohol produced in agricultural distilleries in Germany are higher than the production costs in alcohol factories on an industrial scale in other EU member states, the spirits monopoly has since had to be supported with a subsidy from the federal budget (2009: around 80 million euros ).

The leadership was exercised by its president. There was the Federal Monopoly Office and the recycling center for agricultural alcohol. The Federal Monopoly Office was responsible for the sovereign tasks and the fundamental matters within the framework of the Spirits Monopoly Act, including the individual tasks resulting therefrom. The recovery agency did the commercial business, prepared a balance sheet with a profit and loss account and prepared an annual report.

The tasks of the BfB consisted in taking over the agricultural alcohol produced in the monopoly area from the small and medium-sized agricultural distilleries as well as cleaning, processing and recycling this alcohol . Specifically, there are almost 700 agricultural potato and grain distilleries, eight fruit community distilleries and around 21,000 active severance distilleries that have historical distilleries or distilleries acquired since 1922. For the cleaning, processing and recycling of the alcohol, the BfB has three cleaning operations of its own in Wittenberg, Munich and Nuremberg, as well as four other storage operations in Hamburg, Holzminden, Neu-Isenburg and Düsseldorf. The neutral alcohol marketed by the BfB , also known as prima fuel or monopoly fuel, complies with the pharmaceutical and foodstuff regulations and is sold to manufacturers of various end products that are produced on the basis of neutral alcohol. These are in detail to manufacturers of certain spirits , such. B. liqueurs , vodka or gin , flavors, medicines and cosmetics. The quality of the neutral alcohol is checked in the laboratories of the BfB.

Contrary to its historical name, the BfB is no longer a state monopoly because it has to sell its agricultural alcohol on the German market in competition with alcohol from free German distilleries, from other EU member states or third countries.

Tank car of the BfB

As a result of the rulings of the European Court of Justice in 1976, the alcohol taken over by the BfB at fixed prices from agricultural distilleries could no longer be sold on the German market at a cost-covering rate or at a profit, as cheap alcohol purchases from other EU member states now had to be permitted. The production costs for agricultural alcohol in other EU member states and in third countries are significantly lower than the production costs for the agricultural alcohol produced under the brandy monopoly, because there agricultural alcohol is produced in alcohol factories on an industrial scale on the basis of the inexpensive raw material sugar beet or sugar cane molasses. In order to support the domestic agricultural distilleries that produce agricultural alcohol based on the more expensive raw materials grain, potatoes and fruit, the federal monopoly administration receives a subsidy from the federal budget to keep their neutral alcohol in competition with EU suppliers and, since 2004, in competition with third-country alcohol and alcohol to be able to sell from free German distilleries. Due to the EU alcohol market regulation no. 670/2003, which came into force on January 1, 2004, the import monopoly of the federal monopoly administration against third country alcohol had to be completely lifted. As a result of the national reform of the spirits monopoly through the Budgetary Reorganization Act 1999 and the forced separation of commercial distilleries from the spirits monopoly by September 30, 2006, there have been free distilleries in Germany that produce agricultural alcohol outside of the spirits monopoly.

System of alcohol production in the Federal Republic of Germany 1983:

All 239,000 alcohol producers then sold at guaranteed prices to the federal monopoly administration, which in turn resold the alcohol to the industry (spirits manufacturers, cosmetics, chemical industries, etc.) at market prices.
Denatured alcohol ( denatured alcohol ; ethanol denatured) was also distributed through the federal monopoly administration until the 1980s, but since the 1980s the alcohol factories were initially allowed to sell the alcohol directly under license. Denatured alcohol was initially only sold in pharmacies and drugstores; alcohol has also been available in supermarkets since the 1990s.

The purchase guarantees of the BfB caused an alcohol surplus of 78 million liters in 1983, and there were state support contributions amounting to around 250 million DM.

Abolition of the liquor monopoly

Since the implementation of the European internal market , the German liquor monopoly has been controversial (so-called product-related subsidies). After the EU had repeatedly agreed to extensions, the monopoly for agricultural closure distilleries finally expired on September 30, 2013. The monopoly for community fruit distilleries and severance pay distilleries expired on December 31, 2017. The distilling rights of the agricultural closure distilleries have been gradually reduced since October 1, 2010. However, the burners receive a compensation payment. In the case of severance pay distilleries, the transition period began on October 1, 2013. Here, however, area-related subsidies are already being discussed as a succession plan. At the end of December 31, 2017, the Spirits Monopoly Act ceased to be in force and the spirits monopoly was thus completely abolished. This also means that the remaining tasks of the federal monopoly administration, which had already been gradually reduced since 2013, are no longer applicable. The federal monopoly administration was therefore finally dissolved by law at the end of December 31, 2018, and the remaining employees switched to the federal customs administration. Of the 650 employees in the 1970s, 20 were left in 2018.