This article deals with the executive branch as state power. In Austria, the guards , especially those of the Interior Ministry, are collectively referred to as the executive .

The executive branch (in the 18th century borrowed from French pouvoir exécutif , executive power ' to Latin exsequi , run' ) is in the state theory alongside legislative ( legislative ) and judicial ( law ) one of the three powers .

It comprises the government ( Gubernative ) and the public administration (Administrative), which are primarily entrusted with the implementation of the law. The executive branch can also exercise norm-setting powers, for example with the right to issue statutory ordinances . These do not have the status of laws, but are derived from existing laws.

The executive branch is often associated with the president of a country, see e.g. B. the United States section .

In contrast, in Germany and Austria , for example, the president has a primarily representative role.

In Germany, the federal government (2014) is part of the executive branch at federal level .

An example of executive action by administrative authorities is the issuing of a notice of fines due to illegal parking.

Here laws are implemented by the state. An executive act (executive act) always occurs when a public administrative authority takes a decision and communicates this to the citizen, for example in a letter. These administrative acts generally concern the relationship between citizens and the state ( subordination theory ).

The citizen can raise an objection to any administrative act and, if necessary, then sue an administrative court, which then examines the decision against the citizen in detail for its legality .

The executive is bound by law and justice (cf. also Article 20, Paragraph 3 of the Basic Law ): the rule of law .

The Bundeswehr can also be seen as part of the executive in some respects, although this view is not clearly or not exclusively applicable: Although the Bundeswehr is directly subordinate to the Federal Government or, more precisely, to the Federal Ministry of Defense , it is a so-called “ parliamentary army ”, the use of which cannot be decided in all cases solely by the respective federal government. With regard to armed operations by the Bundeswehr, the Bundestag as a whole (insofar as the legislature ) has extensive rights of co-decision and control that go beyond the normal level of executive control. With regard to non-armed deployments of the Bundeswehr in Germany within the framework of Article 35 of the Basic Law, for example for disaster relief as in the case of the flood disaster in 2002 , the categorization of the Bundeswehr as part of the executive branch is correct.

In Austria , the executive in a political sense at the federal level is the federal government and the federal chancellor . Under constitutional law, the Federal President is head of the executive branch, since he appoints the Chancellor and the government. When making his appointment, he is de-jure not bound to the National Council, which is why one speaks of a theoretically strong president (see also semi-presidential system of government ). He also has a number of special skills that have never been exercised since the office was founded. Each federal state has an executive, the state government .

In Austria, however, “the executive” in particular means the police . This can be done e.g. This can be shown, for example, by the fact that the legal official title of a police officer is an executive officer . The term security executive is meant the security agencies and their subordinate or accompanying wax body . The organs of the public security service provide the executive service for the security authorities .

The two guards of the Federal Police and Justice Guard as well as small community guards are considered to be the executive body . The armed forces are also an executive body, but not a guard body. 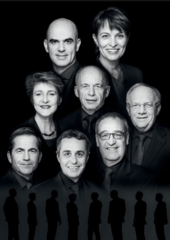 Within the European Union , the European Commission performs executive tasks. Other European organizations, such as ESA or EUMETSAT , are also executive bodies that are controlled by the member states.

In the United States, at the federal level, the office of President of the United States is the head of the executive branch. This is laid down in Article 2 of the American Constitution . It describes the power of office, qualifications to stand for election and the manner in which presidential elections are made. The President has no formal right of initiative in the legislative process of the United States Congress .