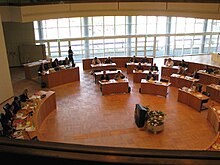 The municipal council represents the municipality's citizens (municipal representative body) and is elected for four, five or six years , depending on the local constitution of the state .

The designation is different in the various German states and also within them depending on the size and status of the municipality. In particular, the following terms can be found - very different depending on the form of municipal constitutional law :

Chairman of the Local Board is depending on the country, either the popularly elected civil or mayor or a self-chosen from the Board Chairman, who may also have a special title, eg. B. Mayor , City Council Chairman , Council President , President of the citizenry , civil ruler or civil Worthalter .

Assignment to the executive

Despite the superficial similarities to a parliament , the municipal council is not part of the legislature , but of the executive branch . The representations in the city-states of Berlin and Hamburg are an exception to this . In the Free Hanseatic City of Bremen , the citizenship of the Bremen state (legislature) is different from the municipal citizenship of the city of Bremen (executive).

This is due to the fact that in Germany laws can only be enacted by the state (i.e. the federal government or the federal states). As a regional body , municipalities belong to the state in the broader sense, but not to the state in the narrower sense. " Law " is also set in the municipal council , but only in the form of statutes , that is, legal norms that are below laws in the norm hierarchy . Since the municipal council, despite its parliamentary character and corresponding public perception, cannot pass any laws in the actual sense, it is considered an executive body and not a legislative one from a constitutional point of view. Just like the judiciary , there can only be legislative organs at the state, i.e. at the state and federal level.

The council meeting of the Flensburg town hall takes place once a year in the naval school Mürwik . (Photo 2015)

The municipal council is determined in elections in accordance with the regulations of the respective municipal electoral law by the citizens in which political parties and electoral communities participate; within the European Union here also have EU citizens the active and passive voting rights .

The municipal council decides in meetings (compulsory meeting). Decisions in the circulation procedure or by obtaining votes in person or by telephone are not permitted. The reason for the compulsory meeting is to be seen in the need for joint consultation, which is an important prerequisite for an error-free formation of the will.

Proper summons of all council members

Majority present and entitled to vote

For its quorum , the majority of its members (excluding the professional council members) must also be present and be entitled to vote. For the majority, the actual strength of the municipal council is to be used. Members who resigned due to their departure, resignation or death, or members who were excluded from the meeting due to measures taken by the police at the meeting, are therefore not included in the calculation of the majority concept. On the other hand, council members who cannot take part in the deliberation and voting due to personal involvement in the deliberation and decision-making matter will be considered. Under certain circumstances, the presence of the majority of the community council members can be dispensed with (e.g. second discussion on the same subject). The municipal council members are obliged to take part in the meetings that are assigned to them by the first mayor (Lord Mayor) according to the rules of procedure and to cast their votes. If, contrary to the regulation, a member of the municipal council abstains from voting or fails to attend meetings in violation of the regulations, the decision of the municipal council remains effective; it applies to the possibility of imposing a fine.

Decision and its form

The resolutions are generally passed in public session ( except: the general public or the legitimate interests of individuals oppose this) with a majority of votes. Minutes must be drawn up about the negotiations of the municipal council.

Committees and parliamentary groups are “auxiliary bodies” of the city council.

The municipal council can appoint so-called knowledgeable citizens or knowledgeable residents without voting rights to a committee, whereby their number may not exceed that of the ordinary council members. In practice, this happens at the suggestion of the political groups or the administration. This regulation must first be introduced by the municipal code. Such persons can also exercise voting rights in Berlin. They are called citizens' deputies there . The “knowledgeable residents” in Mecklenburg-Western Pomerania and the “civil committee members” in Schleswig-Holstein also have voting rights in these committees.

If a resolution to be taken holds a council member or a member of a defined group of people related to him "an immediate advantage or disadvantage", a conflict of interest is presumed to be avoided in the interest of the common good : The council member is described as biased and has the meeting closed leave, the necessary individual decision is made by the appropriate committee.