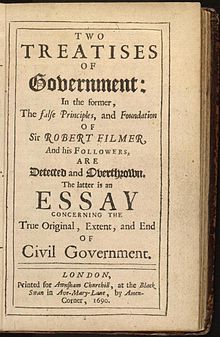 In the work Two Treatises of Government , published anonymously in 1689 , John Locke explained his idea of ​​the federal government (Book II, §§ 145 ff.)

The federative ( English federative ) or federative power ( English federative power ) is according to John Locke a power which includes the power over peace and war, alliances and all other foreign affairs. The federal, like the executive, is one of the powers of man in the natural state , which he gives up for his own good through the social contract . In addition to the legislative and executive branches, the federal branch is the third authority in Locke's division of powers. This concept explained John Locke the first time in his 1689 anonymously published work Two Treatises of Government ( Two Treatises of Government ). In addition, the fourth power was the prerogative , which could be used outside the law for the benefit of the people. The judiciary in use today introduced Montesquieu in 1748 .

According to Locke, the federal and executive branches differ primarily in their sphere of activity. While the executive regulates the enforcement of laws and the maintenance of security within society, the federal has to guarantee the security of all those who are outside the respective society. Since the dealings of people outside the respective society cannot be regulated comprehensively by laws, i.e. by the overriding power of the legislature, like the dealings between citizens, it is usually necessary to hand over federal power to the executive, so that the necessary power Decisions can be made and implemented. In reality, it does not seem practical to Locke to clearly separate the federal and executive branches or to place them in the hands of different people, as this creates the risk of disorder and decline.