The Federal Council ( French Conseil fédéral , Italian Consiglio federale , Rhaeto-Romanic Cussegl federal ? / I ) is the government of the Swiss Confederation and, according to Art. 174 of the Federal Constitution, the “ highest executive and executive authority of the Confederation ”.

As a collegial authority ( Art. 177 Para. 1 BV ), the Bundesrat differs considerably from the governments of other democratic states. It consists of seven equal members elected by the United Federal Assembly for four years. The Federal Council as a whole (and not the Federal President ) also exercises the protocol functions that are incumbent on the head of state in other countries (the Federal Constitution does not provide for such an office).

When creating the Federal Council, the French directorate of the revolutionary time and ancient Greek authorities ( archons ) served as models. Switzerland is the only country in the world that has adapted this system and adopted it as a form of government instead of a Westminster system or a presidential system of government . From a political science perspective, it thus represents a directory system.

In principle, every Swiss citizen with voting rights is eligible. At each election, some applicants from the "common people" register. In the course of history, however, an electoral process with numerous written and unwritten rules that is not easy to describe has developed, the aim of which is to achieve the most "fair" and balanced representation of the population in the sense of Swiss concordance democracy . The procedure is based on Art. 175 BV and Art. 130 , 131 , 132 , 133 and 134 ParlG .

The Federal Council has had the following composition since January 1, 2019:

The seven Federal Councilors actually decide jointly on all matters by majority vote, but in practice, as “department heads”, they each head a department of the federal administration (departmental principle). In this respect they are comparable to ministers in other countries; Colloquially or in the media, terms such as "Energy Minister X" or "Sports Minister Y" are also common for the department heads concerned, depending on the topic. But there is no head of government with authority to issue guidelines . Since the competence of the entire Federal Council extends to all business of all departments, each Federal Council has considerable say and influence beyond its department. 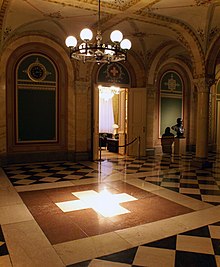 The entrance to the Federal Council meeting room

The Federal Council resolutions passed by majority decision-making by the college must then be represented by the responsible head of department in front of parliament and the public even if the latter actually rejects the decision made (principle of collegiality ) . The Federal Constitution only regulates the form of decision-making ( Art. 177 para. 1 BV : “ The Federal Council decides as a college ” ), without commenting on the application of the principle, in particular on the behavior of the members of the Federal Council after decisions have been made . From time immemorial it has been regarded as exceptionally permissible for a Federal Council to publicly announce an opinion that deviates from a Federal Council resolution if it invokes reasons of conscience and the decision does not fall under the processing of its own department. In recent times, however, it has been observed more and more often that individual Federal Councilors try to disavow the decisions of the college more or less openly. The sense and nonsense of the collegiality principle are also repeatedly discussed in the media and in political committees.

Because Switzerland does not have a head of state, it does not pay any state visits. When the Federal President goes abroad, he only does so as the responsible head of department. However, exceptions also apply here. The Federal President represents Switzerland at meetings of heads of state (for example at the General Assembly of the United Nations ).

According to the protocol-based ranking in Switzerland , the Federal President is the highest Swiss. 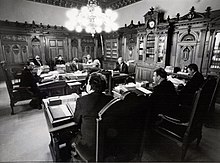 There is a democracy of concordance in Switzerland . Concordance is understood to mean the will to include as many different parties, minorities and social groups as possible in a process and to make decisions by reaching a consensus.

This concordance is taken into account by the parliament when compiling the Federal Council. However, concordance in Switzerland is not mandated by the constitution, as is the consideration of the various regions and language regions ( Art. 175, Paragraph 4 BV : " It must be taken into account that the regions and language regions are adequately represented. " ) , but rather became a tradition for decades. From this concordance a so-called magic formula was formed in 1959. According to this formula, the three parties with the largest number of voters, SP, FDP and CVP, were allowed two each and the fourth-largest party, SVP, could claim a seat in the Federal Council. This composition remained unchanged until 2003. Then one seat changed from the CVP to the SVP after it had become the party with the largest number of voters. The new composition of the 2: 2: 2: 1 formula was sometimes called the “new magic formula” or simply “magic formula”. From 2008 to 2015 the composition of the Federal Council deviated from the “magic formula”: after its two Federal Council members left the SVP, the SVP was initially not represented by any party in 2008, but only by one from the end of 2008, although the party with the strongest votes. Since 2019, the "magic formula" has again not been adhered to, as the Greens rose to the fourth largest party in the national and Council of States elections, but are still not represented in the Federal Council.

A Swiss Federal Councilor receives an annual gross income of CHF 445,163 (January 1, 2017) and annual (non-taxable) entertainment allowances of  CHF 30,000 (January 1, 2017, not indexed). The gross annual income is adjusted to inflation, but there is no real wage increase. In addition to the amounts mentioned, the Federal President receives compensation of CHF 12,000 during the one-year presidential year. Any costs incurred for telecommunications (landline, mobile phone, PC) are borne by the federal administration.

In addition, the members of the state government are each entitled to a representative vehicle and a company vehicle. If there is time pressure, a helicopter or jet from the Swiss Air Force can be used for business trips . A Federal Council also receives a general season ticket (GA) for the Swiss Federal Railways, first class, and a GA travelcard for the cable cars in Switzerland. After serving as a Federal Councilor, the former magistrate receives an annual pension of 222,359 francs (fifty percent of the income of an incumbent Federal Councilor). Wages from any professional activity are taken into account if the sum of wages and pension would otherwise result in an income that is higher than that of an incumbent Federal Councilor. The retirement pension was introduced in 1919. They also wanted to counteract the fact that Federal Councilors remain in office until their death for financial reasons. From 1848 to 1919, 18 out of 46 magistrates died in office. The current regulation has been in force since 1989.

Due to the constitutional mandate of the Federal Council representation to take the different language and country parts into account, the aspect of the regions, in contrast to the mostly narrow and rigid cantonal borders, comes to the fore in the Federal Council election. Here, in turn, two levels can be traced, on the one hand the subdivision into language regions and on the other hand the division into the major regions of Switzerland traced by the Federal Statistical Office (FSO) :

Here, the picture emerges that, compared to their population, Eastern, Central and Northwestern Switzerland were not given enough consideration as regions in their right to representation in the state government. The difference between the actual number of Federal Councilors and the demand according to the population is particularly clear in the case of north-western Switzerland , i.e. the Basel region . The canton of Basel-Stadt provided its second and last Federal Councilor with Hans-Peter Tschudi in 1959. The canton of Basel-Landschaft, on the other hand, for the first and last time with Emil Frey in 1891. That means that the seats that the Language minorities were constitutionally granted, within German-speaking Switzerland, with a few exceptions, at the expense of the Basel region.

In accordance with Art. 185 Para. 3 of the Federal Constitution (BV), the Federal Council can “issue ordinances or orders directly based on this article in order to counteract serious disruptions to public order or internal or external security that have occurred or are imminent. Such ordinances are to be limited in time. "

For a long time, foreign travel by the Federal Council was frowned upon , primarily because of Switzerland's neutrality . Switzerland was almost exclusively represented abroad by its ambassadors and other diplomats - although Switzerland did not appoint ambassadors until the 1950s. (The representation was previously done by diplomats in the rank of minister .) Other reasons were the thrift and the return to one's own country.

A rethink came with the assassination of US President John F. Kennedy . An urgent meeting discussed the extent to which a Federal Councilor's trip to Kennedy's funeral service would set a precedent. The Federal Council came to the conclusion that the absence of the Federal Council would be difficult to convey to the Swiss population and that during this visit one could also address the American protective tariffs on watches. Finally, the Foreign Minister Friedrich Traugott Wahlen was sent to the funeral service, and there was an official meeting with the US Secretary of State Dean Rusk .

The Federal President usually represents the country, especially on state visits and at meetings of international organizations. Despite the opening up initiated by Kennedy's assassination, foreign trips by the Federal Council have only become the norm since the collapse of the Soviet Union (1990).

The incumbent Federal President has been inviting his colleagues to a two-day excursion to his home canton since 1957. Colloquially, Bundesratsreisli (Swiss German for small Bundesrat trip ) or earlier school trip of the Bundesrat is spoken of. The trip takes place after the last Federal Council meeting before the summer holidays. Even before 1957 there were trips by the entire Federal Council, for example to the Vaudois Fête des Vignerons in 1927 or to the Landsgemeinde Appenzell Ausserrhoden in 1938.

Current and former Federal Council parties of the Swiss Confederation