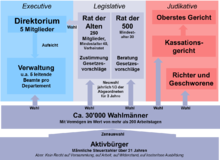 The Constitution of the French Republic of August 22, 1795

The Directory ( French Le Directoire ; October 26, 1795 - December 24, 1799) was the last form of government of the French Revolution . State power was essentially incumbent on a five-person collegiate body, which is also known as the Directory . This system became the model for the subsequent directorate systems in other countries.

It replaced the rule of the National Convention as a result of the revolt of the 9th Thermidor II of the republican calendar (July 27, 1794) and the overthrow of Maximilien de Robespierre .

The Constitution of the Directory (Constitution of Year III) was adopted by the National Convention on August 22, 1795 . It came into force after a referendum on September 23.

For the first time a parliament with two chambers was introduced:

The control of the executive was in the hands of a five-member board of directors. Its members were chosen by the Council of Elders from a list submitted by the Council of Five Hundred. The ministries (then seven) were subordinate to the directorate as the actual executive.

The first elections began on October 12, 1795 ; the last meeting of the Convention took place on October 26th. The first board of directors was elected on October 31st.

Count Lazare Carnot was still the opinion leader in the 1st and 2nd Directory , after the coup d'état of the 18th Fructidor V (September 4, 1797), the Directory was controlled by a triumvirate ( Paul de Barras , La Révellière-Lépeaux , Jean François Reubell ) in which Barras dominated.

The board of directors ruled by Barras quickly became synonymous with corruption and deterioration in public finances. The assignat currency was subject to strong inflation , despite the military successes of Napoleon Bonaparte in the Italian campaign 1796–1797 and the resulting war revenue.

From the 5th Directory, Emmanuel Joseph Sieyès became a leading figure and was able to pave the way for Napoleon. Napoleon himself could not become a member of the board of directors, as the constitution stipulated that you had to be at least 40 years old.

Napoleon Bonaparte overthrew the Directory on 18th Brumaire VIII (November 9, 1799) and the following day he was elected First Consul, the two members of the Directory Ducos and Sieyès initially became the other two consuls of the three-member consulate .

On December 24, 1799, the consular constitution came into force. This date is considered to be the end of the French Revolution and the beginning of the consulate.

1. Directory of the 9th Brumaire IV

2. Directory of the 1st Prairial V

3. Directory of the 18th Fructidor V

5. Directory of the 27th Floreal VII

Member of the Board of Directors in 1799

7th Directory of the 2nd Messidor