The seat of the constitutional body of the federal government is the federal capital Berlin ( Section 3 (1) Berlin / Bonn Act ). The government has influence on the legislature because it can introduce bills to the German Bundestag and comment on bills from the Bundesrat .

The Federal Chancellor has the authority to issue guidelines within the Federal Government ( Chancellor principle ): He determines the basic principles of politics and is responsible for them. The federal ministers manage their respective areas of responsibility independently ( departmental principle ) within the framework of the Chancellor's guidelines (which are binding on them ), and they have to report to him regularly. The Federal Chancellor also determines the scope of their areas of responsibility. If two Federal Ministers disagree on one point, either the Federal Chancellor or the Federal Government decides. In everyday politics, however, the Federal Chancellor does not usually make official use of his authority to issue guidelines, but rather coordinates his policy with the Federal Ministers. Since these usually also consist of different parties ( coalition ), this is also politically necessary, as otherwise a "coalition break" threatens. Nowadays, most of the main features of government policy are laid down in a coalition agreement at the beginning of the legislative period and, if necessary, discussed in the coalition committee , whereby these are only informal agreements.

Members of the federal government in the German Bundestag in 2014

On December 8, 2021, the federal cabinet decided on the order of government members; this results in the following order of the individual federal ministries:

Order of representation in the federal government

This currently results in the following order of representation:

The preferred recruitment of persons with the qualification for judicial office (fully qualified lawyers ) in the career of the higher non-technical administrative service (so-called legal privilege ) can also be found in the federal government. The proportion of fully qualified lawyers was always at least 25 percent, with the exception of the period 1998 to 2002 ( Schröder I cabinet ).

Duration of government formation in Germany since 1980

On average, the Chancellor has been elected after 54 days since 1980. 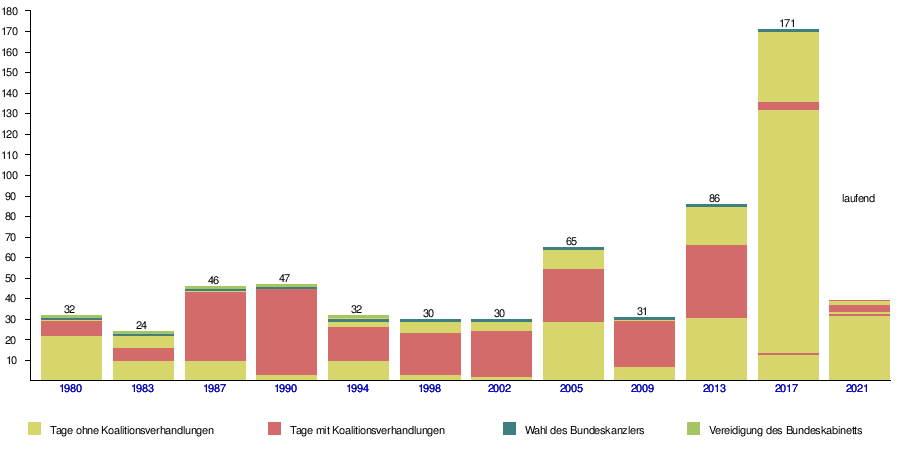 Duration of government formation in Germany since 1949

On average, the Chancellor was elected after 43 days between 1949 and 1976. In the 1976 Bundestag elections , regardless of the duration of coalition negotiations, the constitution in the Basic Law governing the length of the electoral term that was valid up to this year meant that a government could only be formed more than two months after the election; since then, it has always been possible no later than 30 days after the election.

This timeline shows the length of time between the federal election and the swearing-in of the cabinet in days.

Aerial view of the government district , 2016

An open day has been held every summer by the federal government since 1999 . The Federal Chancellery, Federal Press Office and 14 ministries can be visited on this day. A look into the offices of speakers and ministers should give an impression of the everyday work of politicians.

Meseberg Castle has been the federal government's guest house since 2007 . Cabinet retreats traditionally take place here, and it often provides a framework for informal discussions. Before that, from 1990 the federally owned guest house on the Petersberg in Koenigswinter near Bonn was used to a similar extent by the constitutional organs of the Federal Republic of Germany, after the government move in 1999 to a reduced extent.

Federal Governments of the Federal Republic of Germany