The Polish Government (Polish: Rada Ministrów - Council of Ministers) - is the cabinet that exercises executive power in the Republic of Poland . It is carried out by a Prime Minister ( Polish: Prezes Rady Ministrów , Prime Minister for short ) and a Council of Ministers, who are appointed by the President and share certain powers with him ( national defense , foreign policy ), but are responsible to Parliament .

Governments of the Third Polish Republic

On August 24, 1989, Tadeusz Mazowiecki was elected the first prime minister of the Third Republic and thus the first non-communist head of government of the post-war period. Of the 23 members of the government, only four were representatives of the communist PVAP. On December 14, 1990, he resigned from this office.

Tadeusz Mazowiecki's successor for a few months was Jan Bielecki , who had excelled in the 1980s as an economic policy advisor to the Solidarność union . He supported the reforms of his finance minister Leszek Balcerowicz . In terms of foreign policy, he relied on close cooperation with Germany. He negotiated the German-Polish neighborhood agreement with Chancellor Helmut Kohl , which the two signed on June 17, 1991. His term of office ended on December 5, 1991.

On June 5, 1992, Waldemar Pawlak was appointed Prime Minister by President Lech Wałęsa, but was unable to form a functioning government.

He was followed by Hanna Suchocka from July 11, 1992 to October 25, 1993 . In May 1993, however, it failed due to a vote of no confidence from the members of the Solidarność trade union, who disagreed with the accelerated liberalization of the economy. President Wałęsa dissolved parliament and called new elections . 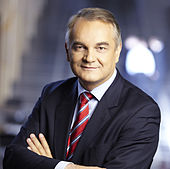 Waldemar Pawlak took over the coalition government made up of the PSL and SLD again as Prime Minister and ruled from October 26, 1993 to March 1, 1995.

He was succeeded by Józef Oleksy , who ruled from March 4, 1995 to January 26, 1996. He came from the communist party PZPR and was Minister for Cooperation with the Solidarność trade union in the final phase of the People's Republic of Poland . In 1996 he resigned after he was suspected of collaborating with the Soviet or Russian secret service. Soon after, however, the allegations turned out to be baseless.

From February 15, 1996 to October 17, 1997 Włodzimierz Cimoszewicz was Prime Minister of a social democratic government.

After the general election in 1997 was Jerzy Buzek as prime minister. He ruled from October 17, 1997 to October 19, 2001. He initially led a coalition of the moderately conservative Akcja Wyborcza Solidarność (AWS) and the liberal Unia Wolności (UW). After UW left government in 2000, he headed an AWS minority government.

During his tenure, u. a. the Polish regions are structured into 16 new voivodeships . In March 1999 Poland , the Czech Republic and Hungary joined NATO ; Negotiations on this began in 1997 .

Buzek's policy was aimed at bringing Poland to the European Union as quickly as possible. His government had considerable difficulties in enforcing the necessary domestic measures. The loss of popularity led to conflicts within the ruling party AWS, which suffered a severe election defeat in September 2001 . 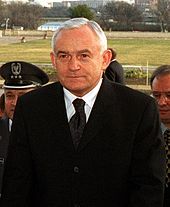 Leszek Miller ruled from October 19, 2001 to May 2, 2004 . The reign was marked by numerous corruption scandals. Immediately after Poland joined the EU , Miller resigned on May 2, 2004. 20 MPs had previously left Miller's Social Democratic Party (SLD) and thus further reduced the basis for the minority government. 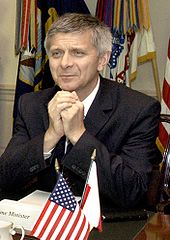 The former finance minister Marek Belka was appointed as his successor . He led the minority government until the end of the legislative period and was replaced by a conservative PiS government after the parliamentary elections in September 2005 .

On November 10, 2005, a minority PiS government under Prime Minister Kazimierz Marcinkiewicz was awarded the confidence of the Sejm . On May 5, 2006, he formed a coalition with the clerical-nationalist LPR and the left-wing populist farmers' party Samoobrona , which had a majority in the Sejm. The chairmen of the two coalition partners were elected deputy prime ministers. On July 7, 2006, however, Marcinkiewicz announced his resignation as Prime Minister, which took place on July 10, 2006.

After Marcinkiewicz's resignation on July 7, 2006, the twin brother of Polish President Lech Kaczyński , PiS chairman Jarosław Kaczyński , was elected Prime Minister of the coalition government. Jarosław Kaczyński's nationally conservative political course led to an international isolation of Poland, which culminated at the meeting of the European Council in June 2007 in a vote defeat in the negotiations of the reform treaty. At the same time, tensions between the coalition partners in the government increased, and several ministers of the LPR and Samoobrona were dismissed by Kaczyński. In August 2007, Kaczyński declared the coalition to have failed and announced new elections for October 21, 2007. On September 7, 2007, the Sejm decided to dissolve itself.

From the parliamentary elections of October 2007 , the liberal-conservative PO emerged as the big winner.

Since November 2007, the liberal-conservative PO and its coalition partner, the moderate peasant party PSL , have formed the government under Prime Minister Donald Tusk .

In the parliamentary elections on October 9, 2011 , the PO remained the strongest party and the coalition was continued.

Kopacz replaced Tusk, who was moving to Brussels as President of the European Council in September 2014 .

The parliamentary elections in Poland in 2015 brought about a change in power and politics, as the PiS won 235 of the 460 seats in the Sejm, from November 2015 to December 2017 Beata Szydło was head of government. The constitutional crisis arose through the repeated appointment of three constitutional judges to positions already legally occupied .

Lists of the cabinets (governments) of the states of Europe