Under defense to all national defense effort goes a country as opposed to collective defense .

Structure of the territorial army of the Bundeswehr 1969–1992

Structure of the territorial army of the Bundeswehr 1992–2001 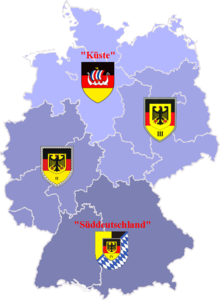 The term national defense was used both in the Federal Republic of Germany and in the German Democratic Republic .

The tasks of civil defense were to maintain governmental power, protect and supply the population, develop and maintain national resources and support the armed forces. For this she made use of the administrative authorities, the Federal Border Police , the police and civil aid organizations.

The military national defense served the establishment, training and maintenance of the armed forces, their logistics and their security. For this purpose, the Bundeswehr had the territorial defense organization, basic logistics, replacement forces and the Bundeswehr administration . The territorial forces were initially grouped into six military area commands under the Command for Territorial Defense , which in turn was directly subordinate to the Federal Ministry. In 1969 they were assigned to the army under the name Territorial Army, with three territorial commands being set up as a further management level .

After 1990, aspects of Germany's national defense faded into the background as the direct threat to German territory decreased noticeably. In 1992 the territorial forces were partially merged with the field army , with the loss of the territorial commands. The Defense Policy Guidelines of 1992 dispensed with the term national defense and instead spoke of protecting Germany and its citizens from external danger and political blackmail .

Skills that are used exclusively for traditional national defense against conventional attackers are no longer required in view of the new international environment.

The task of traditional national defense is being replaced by the more comprehensive concept of protecting Germany and its citizens.

With the Defense Policy Guidelines of 2011, national defense is addressed in a new form. It is listed first among the tasks of the Bundeswehr:

The following important information is missing from this article or section:
Please complete if necessary
Help Wikipedia by researching and pasting it .

Since the Congress of Vienna in 1815, Switzerland has been obliged under international law to maintain its neutrality . The law of neutrality is recognized under international law and has been codified in the Hague Agreement on Neutrality since 1907 . The cautious foreign policy, that is, the non-interference in so-called foreign trades (these are armed conflicts between foreign states), is considered the basis for the historical success of the small state of Switzerland since the Stans agreement .

The Swiss army has according to Federal Constitution Article 58 of the following tasks:

The army is organized according to the militia principle . The use of the army is a federal responsibility. Securing space and national defense is the army's core mission. The army is supposed to secure and defend the territory of Switzerland . To this end, Switzerland relies on the deterrent effect (named in Switzerland with the French term dissuasion ) of the Swiss army's constant readiness to fight.