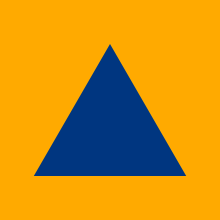 International symbol Civil Defense , as a protective symbol according to international humanitarian law

The GDR regulated civil defense (ZV) by law between 1967 and 1970, subordinated the medical facilities of the German Red Cross (DRK) of the GDR to it and integrated disaster control. Citizens of the GDR (including women) could be conscripted for civil defense duties from the age of 18. A course in civil defense was part of the military instruction in the polytechnic high school for all girls and those boys who did not go to the military camp . The same applied to pre-military training in the extended high school , vocational training and studies.

According to the Civil Service Act, citizens can be obliged to provide civil defense services and be punished for violations (unauthorized absence, flight from work and non-compliance with the instructions in Sections 52 to 54 of the ZDG).

On August 24, 2016, the Federal Ministry of the Interior and the Federal Office for Civil Protection and Disaster Assistance (BBK) presented a new concept for civil defense (KZV). It relates in particular to civil alarm planning, guaranteeing the supply of water and food, communication services and energy supply and, in the event of tension and defense, the security of state and government structures. In this context, a new framework concept for self-protection is to be developed for the federal government and federal states, which is intended to improve the self-protection and self-help ability of the population against the background of a changed risk situation.

The section is unoccupied

Civil defense is also based on the defense objectives of NATO. This is viewed as critical insofar as resources such as shelter spaces, medical care or evacuation options are very scarce in an emergency. Fears were expressed that these life-saving resources would be allocated according to political objectives and that this would not be compatible with the idea of ​​equal treatment under Article 3 of the Basic Law.

For example, numerous bunker systems were maintained in Stuttgart. Medical care was the only one planned for the facility, which was intended as a "command bunker" for the city administration, police and a military liaison office.

The beginnings of civil defense in Switzerland go back to the 1920s. The Russian Revolution and the emerging fascism in Italy, as well as the spread of totalitarian ideologies via radio and film, brought the new insight that the democratic constitutional state had to be defended in peacetime.

From the 1930s to the 1960s, intellectual national defense was strengthened on the one hand as Swiss-recognized fundamental values ​​and on the other, fascist, National Socialist and communist totalitarianism was warded off. The Swiss National Exhibition of 1939 in Zurich promoted the cohesion and resistance of the Swiss people as rural spirits . From 1939 it was primarily the task of the new Army Section, Army and House , to counter the state cultural propaganda from Germany and Italy and to support the population in their will to defend themselves. In 1969 the dissemination of the civil defense book led to a storm of indignation because of the threat scenario of the revolutionary war , which officially marked the end of intellectual national defense.

In 1973 civil defense was integrated into the concept of general defense (Report 73 on the security policy of Switzerland) with the integral objective ( Schmid Commission ) maintaining peace in independence . The report relied on the conventional strategy and finally dropped the option of Swiss nuclear weapons. Recent developments have shifted from classic civil defense in the event of an armed conflict to civil protection in dealing with disasters and emergencies.

Portal: Disaster Protection  - Overview of Wikipedia content on the topic of disaster protection