Typical are therefore the permanent mobilization in mass organizations and the exclusion up to the killing of those who actually or possibly oppose the total claims to power. The political counter-model to totalitarianism is the democratic-free, substantive constitutional state with the freedom of citizens guaranteed by basic rights , the separation of powers and the constitution . Most of the time, both National Socialism and Stalinism are classified as prototypes of totalitarian regimes.

The term was coined in 1923 by the Italian liberal Giovanni Amendola . He called the fascist system of rule created by Benito Mussolini , the dictator of Italy at the time , a totalitarian system ( sistema totalitario ). While the anti-fascists initially wanted to warn against an absolute and uncontrollable rule, the term was quickly adopted by the fascists themselves and given a positive connotation. As early as 1925, in a speech at La Scala in Milan, Benito Mussolini described the character of the total state he was striving for as follows: Tutto nello Stato, niente al di fuori dello Stato, nulla contro lo Stato (“Everything in the state, nothing outside the state , nothing against the state ”).

In Germany the right-wing constitutional lawyer Carl Schmitt spoke in the affirmative of a "total state" that would bring the unification of state, society, culture and religion and to which the future belongs, and his colleague Ernst Forsthoff soon published a monograph of the same name .

Meanwhile, the concept of totalitarianism found its way into the general domestic political debate in Italy. For example, the Catholic People's Party around Luigi Sturzo , using the term, equated the camps of fascists and communists , as both rejected parliamentary democracy . In November 1939, the American Philosophical Society hosted the first symposium on the Totalitarian State , at which the American historian Carlton JH Hayes emphasized the historical novelty of totalitarianism in relation to older forms of dictatorial rule. In 1940, Franz Borkenau presented an early conception of totalitarianism in his work The Totalitarian Enemy by comparing National Socialism and Bolshevism .

After the Second World War , the term was used exclusively with negative connotation. Different publicists compared National Socialism and Stalinism and described both as totalitarian regimes. Others rejected the use of the word totalitarianism as an expression of the Cold War without deeper reflection .

One of the best-known critics of totalitarianism was the writer George Orwell , who in 1948 in his novel 1984 anticipated later findings of other publicists on a fictional level. The most widely received theorists of totalitarianism are Hannah Arendt , Carl Joachim Friedrich and Zbigniew Brzeziński . Numerous scientists, such as B. Bassam Tibi , today advocate the thesis that Islamist systems and movements represent a current manifestation of totalitarian claims to rule.

Characteristics of the totalitarian state 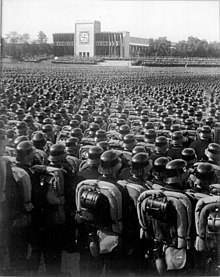 Parade at the Nazi party rally in 1935 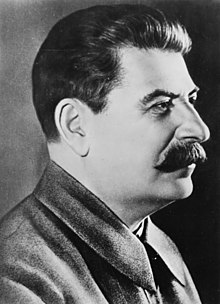 Many totalitarian states (such as the Nazi-ruled Germany , the Stalinist Soviet Union or North Korea ) have very specific characteristics that they all have in common, for example:

Friedrich and Brzeziński also point out the central role of technical progress , which makes features 3–6 possible.

Political scientist Peter Graf Kielmansegg criticized Friedrich / Brzeziński's model, which in his opinion could not explain the dynamics of social change within the system. According to Kielmannsegg, the decisive characteristics of totalitarian systems are:

The decisive factor here is not that the leadership really regulates everything itself, but that it has the possibility, in principle, to take every decision to itself and to revise the decisions that were made outside the leadership. It is also decisive that the totalitarian leadership is not subject to any control body.

This means that the political system has the power to intervene in all areas of social life.

What is decisive is the set of sanction instruments available and the freedom of disposal over these instruments. Terror is just one of the possible instruments. The provisions on educational, professional and communication opportunities as well as on the opportunities for material satisfaction are also mentioned, for example.

According to Kielmansegg, the use of decision-making power of unlimited scope (2) would result in the above structure. This point should therefore be seen as the beginning of the emergence of totalitarian systems. As soon as the monopoly of power is established, securing the monopoly (maintaining power) becomes the monopoly end in itself. According to Kielmansegg, in totalitarian systems there is priority to securing the monopoly of decision-making over all ideological goals of rule. Ideology and the mass party would only have the task of motivating, controlling and providing legitimation.

The model of total domination according to Hannah Arendt

“So the essence of totalitarian rule is not that it curtails or eliminates certain freedoms, nor that it eradicates the love of freedom from human hearts; but only in the fact that it closes people, as they are, with such violence in the iron bond of terror that the space of action, and this alone is the reality of freedom, disappears. "

She names further criteria of totalitarian rule: the will to rule the world , fanatical mass movements based on the Führer principle , millions of murders in the name of a “new” legal order, that is, the reinterpretation and manipulation of morality and the link with an ideology and the totalitarian one Propaganda.

Arendt only referred to National Socialism and Stalinism as totalitarian systems of rule. Since ancient times she has viewed other forms of political oppression, for example in times of war, as dictatorships or systems of tyranny . She provides a wealth of examples for this. Among other things, she marked the fascism of Benito Mussolini and the Soviet Union after Stalin's death as well as their "satellite states" as non-totalitarian dictatorships. She expressed concern that totalitarian forms of society could again be expected in the future.

Karl Popper tried to show that our civilization has still not recovered from its birth trauma - from the trauma of the transition from the tribal or "closed" social order, which is subject to magical powers, to the 'open' social order , which the critical abilities of the Set people free. The shock of this transition was one of the factors that enabled the rise of those reactionary movements that have worked and are working towards the overthrow of civilization and the return to tribalism. This suggests that the ideas we call totalitarian today belong to a tradition that is as old or as young as our civilization itself. 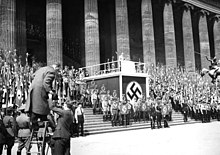 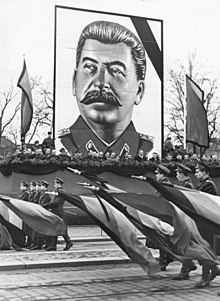 Depending on the totalitarianism model, different states are referred to as totalitarian. Examples of frequently mentioned regimes are:

It is controversial in research whether the term can be applied to the GDR , for example. Eckhard Jesse (1994) applied the concept of Juan José Linz , who differentiated totalitarian dictatorships from authoritarian ones on the basis of various characteristics, to the GDR. He came to the conclusion that the GDR under Walter Ulbricht can be described as totalitarian. Under Erich Honecker , the GDR increasingly lost this character and developed into an authoritarian system due to the decreasing ideologization even within the SED and the decreasing mobilization of the population . In his monograph The SED State, Klaus Schroeder describes the GDR as a “(late) totalitarian surveillance and supply state”.

According to Jacob Talmon , a democratic constitutional state can also develop into a “ totalitarian democracy ”.

The totalitarianism theory has been comparing the systems of fascism with Stalinism since its emergence in the 1920s. Although both ideologies opposed and fought against each other strictly, they show, according to the position of totalitarianism researchers, a number of striking similarities in terms of form and content. Hannah Arendt only describes National Socialism and Stalinism as totalitarian and as “variations of the same model”.

In recent years some intellectuals have compared the crimes in socialist states with those of National Socialism. In 1998 the Black Book of Communism was published , in which various studies portray the crimes of communist governments in part as the “ Red Holocaust ”. This newly introduced term ties in with the so-called “ Historikerstreit ” of 1986, in which the historian Ernst Nolte paralleled the “racial murder” of the National Socialists with the “class murder” under Josef Stalin .

Critique of the totalitarianism theory

The theory of totalitarianism has been criticized by socialist historians and is sometimes referred to as the “doctrine of totalitarianism”. It is an ideological construct of the Cold War that should defame the countries of real socialism . According to this view, National Socialism cannot be compared with socialist systems of any kind. The concept of totalitarianism does not capture the goals and contents of political systems or the motivation of political actors, but only the external forms such as the oppression and persecution of political or other groups. A number of common features, such as a unity party, a comprehensive apparatus of power, a monopoly of communication, the cult of the leader and terror, are therefore insufficient to describe governments with different ideological orientations as totalitarian.

Critics of the concept of totalitarianism see the danger of equating Stalinism and National Socialism. Any comparison of structure and practice inevitably leads to relativizations. This is how the Holocaust is made one crime among others. Thus, even among the manifestations of such a historicization of the Holocaust, z. For example, the so-called “massacre comparisons”, which did not take into account the anti-Semitic core of Auschwitz , led to a reinterpretation of German history.

This is countered by the fact that the historical uniqueness of the National Socialist crimes cannot mean that political structures and practices cannot be compared with one another. A comparison of systems and their crimes does not represent an equation of the compared systems or their crimes. Regardless of the diversity of the ideologies of the systems examined and the extent of the victims they are responsible for, totalitarianism research brings progress in knowledge regarding the structures and mechanisms of rule of totalitarian dictatorships. Their condemnation as a construct of the Cold War also overlooks the fact that their terminology and basic statements had already been developed since the late 1930s and that any politically striking claims of the theory could generally say nothing about its scientific justification.

In political science, the models of totalitarianism, which are more aimed at structures of rule, are now supplemented by concepts such as political religion , for example to explain motivation and mobilization within totalitarian systems.

The thesis of this work is that at the end of the 20th century, with the pursuit of superpower and the management of democracy in the USA, a post-democratic government technique emerged that combined elements of liberal democracy with those of totalitarian political systems. Wolin sees a central difference to classical totalitarianism in the fact that National Socialism was a mobilization regime, while inverted totalitarianism relies on a far-reaching depoliticization of the population. In addition, the postmodern form of total domination relies on softer , barely perceptible mechanisms of oppression. A strong leader is also dispensable in this form of government.

Classic of the totalitarianism theory