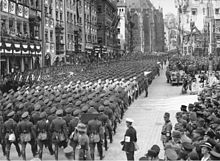 As militarism is domination of military values and interests in the political and social life designated as such by the one-sided emphasis on the law of the jungle and the idea wars were necessary or unavoidable, expressed or through a strictly hierarchical , on command and obedience- based thinking. 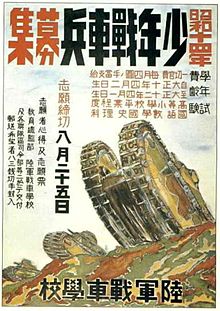 According to the political scientist and militarism researcher Wilfried von Bredow , militarism, which he describes as “the dominance of the military as an organization in state and society” and which includes “the predominance of military-warlike categories of thought in the state, society and politics”, is “two different Models for the civil-military relationship "that developed after the industrial revolution:

Military parade to mark the 75th anniversary of the Workers' Party in North Korea , on October 10, 2015

Not only, but also with a view to the National Socialist tyranny, Antony Joseph Coates characterizes militarism as "a frequently occurring tendency or a cultural prejudice in favor of war that a war leader can fall back on". In this form, “militarism first causes wars and then dictates their ruthless implementation”. According to Art. III of the Control Council Directive No. 38 , militarists were among those burdened by the Nazi regime and were to be denazified in court proceedings .

According to the German military historian and peace researcher Wolfram Wette , one criterion for a non-militaristically oriented state is that it requires its soldiers to refrain from "obeying an order that includes an offense or crime". A refusal to obey is, for example, acc. Section 22 (1) sentence 1 of the WStG is not punishable in Germany if a criminal act would be committed by following an order.

The spiked hood is a symbol of Prussian militarism

Military chaplains swore in on the new recruits on November 23, 1914 in Lübeck Cathedral

Again and again, entire societies have been shaped by a long-lasting militarization that encompasses many areas of society (e.g. Sparta ). In the German cultural area, militarism formed an important social phenomenon from the 18th to the end of the 20th century. Since the early modern period, the forced recruitment of mercenaries or compulsory military service when building up standing armies in the Protestant countries of Europe has led to a strong militarization. Emmanuel Todd points out that the younger sons in Protestant societies, which were organized according to the principle of the ancestral family (the eldest son inherits the farm and lives with the parents, the younger sons go largely empty), are “instruments of a true militarization of society ”. The possible solution of changing to a monastery in Catholic countries remained closed to them. At the height of militarization under Louis XIV around 1710, Catholic France only had an army strength of 1.5% of the population, whereas in Protestant Prussia in 1740 it was 3.7% and in 1760 7.1% due to the recruitment of non-inheriting sons. In Protestant Sweden, 7.7% of the population was in military service in 1709, and in Hessen-Kassel, which lent its soldiers to the British during the American War of Independence, the militarization rate also reached 7.7%. England was an exception among the Protestant states: Here the nuclear family dominated early on, in which the farmers as tenants were not fixed on the land and the inheritance status of the children was not fixed, and the recruitment rate reached its maximum in 1710 at only one percent; it fell to 0.3% by 1783.

Also of nationalism , a side effect of militarization was created in Protestantism: "Every Calvinist people who read the Bible, holds at any time for a new chosen by God of Israel." Later, was Lutheranism into a vehicle for militarization of German society . Before the First World War, Ernst Troeltsch noticed that Lutheranism was "combined [...] with the reaction of monarchical thought, agrarian patriarchalism, the military instincts of power" and thus gave the "restoration ideal and ethical support". It was therefore "supported by the socially and politically reactionary powers with all means of violence, sanctified the realistic sense of power and the ethical virtues of obedience, piety and a sense of authority that are indispensable to Prussian militarism."