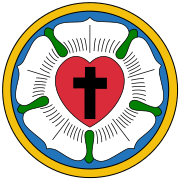 The Luther rose : a symbol of the Evangelical Lutheran churches

Evangelical Lutheran churches are based on the Bible , in part on the dogmas of the old church and on the confessional documents of the Evangelical Lutheran Church , which were written by Martin Luther and other Lutheran theologians, such as Philipp Melanchthon , in the course of the Wittenberg Reformation . The Lutheran denominational family has around 83 million Christians. 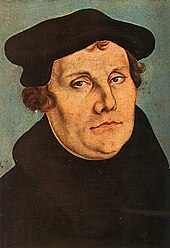 The term Lutheran was originally a polemical term used by the Roman Catholic side to identify Protestants as heretics . Johannes Eck used them in his 1520 book Adversus Lutheranos, et alios hostes Ecclesiae ("Against the Lutherans and other enemies of the Church").

It was not until later that the term became a self-designation to demonstrate a differentiation from both the Roman Catholic and the Evangelical Reformed .

Originally, Luther's main concern was to reform the Roman Church . It was not until the Confessio Augustana (Augsburg Confession) of 1530 that it became clear that a reformation of the Old Believers was not possible.

Many of the Lutheran churches call themselves Evangelical Church AB with reference to the Augsburg Confession.

In Lutheran theology, the Bible has the rank of "norma normans" (normative norm), while the Lutheran confessional writings are "norma normata" (standardized norm = norm standardized by the Bible). According to the concord formula (FC) “From the summary concept”, “God's word is the only guideline and rule of all doctrine ... to which no man's writings should be respected, but everything should be subjected to the same.” The confessional writings nevertheless have a very high dignity, “because (quia bond) they are taken from God's word and firmly and well founded in it ”(FC: from the summary concept). According to free-church Lutherans, this quia bond as a relationship between scripture and confession can only be found in Germany in the old confessional Lutheran churches , such as the Independent Evangelical Lutheran Church . The Lutheran regional churches see the bond between scripture and confession not as a quia (because), but as a "quatenus" (insofar) bond. This gives rise to different positions in the teaching and life of the churches.

The confessional documents (BSLK) are:

The basic ideas of Lutheran theology can be summarized in four Latin formulas:

Lutherans reject the veneration of Mary as practiced by the Roman Catholic Church, the papacy and the hierarchical constitution of the Church as iure divino (according to divine law, i.e. unchangeable). In some Lutheran churches, the historical episcopate has been preserved in apostolic succession . Today's Lutherans distance themselves from Luther's anti-Judaism and in many cases admit complicity in its history.

In the Lutheran church are preaching and communion service of central importance. In addition to the sermon and the celebration of Holy Communion, Holy Baptism and Holy Confession belong to the means of grace of this denomination. However, within the Lutheran churches it is controversial whether confession can be considered a sacrament , as in the Roman Catholic Church and the Orthodox Churches.

Lutheran churches usually donate child baptism , but also expressly do not reject baptisms shortly before confirmation or in adulthood. Last Supper services are regularly celebrated in the form of the German Mass , which goes back to the liturgical reform by Martin Luther in 1526. The presence of Christ in Holy Communion is understood as a real presence : Christ's body and blood are distributed and received with bread and wine. Children are also allowed - at least within the VELKD and also in the Evangelical Church AB in Austria - to take part in the Lord's Supper ( children's evening meal ). In the Independent Evangelical Lutheran Church ( SELK ), children and young people are allowed to take part in Holy Communion if they have previously been instructed in the Lutheran understanding of the Lord's Supper. Here the SELK speaks of early communion. Confirmation and participation in Holy Communion (early communion) are separated.

The Lutheran churches today have three main directions, which are expressed in three worldwide organizations:

Most of the Lutheran churches of old denomination are often viewed as more conservative. "Conservative" means here above all that they are very closely tied to the Lutheran confessions, which are summarized in the Book of Concords of 1580. Through this bond, they reject any form of unionism ( church fellowship of different denominations) and thus also the Leuenberg Agreement .

Most of the Lutheran confessional churches worldwide are united in the International Lutheran Council . 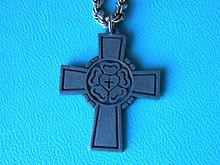 In most cases, Lutheran churches are organized synodally and episcopally . The synods are the highest authorities for legislation as well as teaching and personnel decisions and are each chaired by a synod president or a praeses . In the Lutheran churches in Germany or Austria the spiritual supervision of a bishop or a bishop is exerted or via the ordination has right. The Independent Evangelical Lutheran Church is also headed by a bishop who exercises the right to ordination and doctrinal supervision. He is responsible for the entire Federal Republic of Germany. The leadership function in the Evangelical Lutheran Free Church (ELFK) is exercised by a praeses. The Danish Church in South Schleswig is headed by a provost and (unlike the Danish People's Church ) is synodal.

In Germany, both the Lutheran regional churches and the Independent Evangelical Lutheran Church in the Working Group of Christian Churches work together with Catholic and Orthodox churches.

In Germany and in some Scandinavian countries, Lutheran churches, in regional church or state-independent organizational form, have public law status. The close connection between church and state results from the sovereign church regiment , which led to a connection between “throne and altar”. This is why the Lutheran regional churches in Germany as well as the United and Reformed regional churches have a closer relationship to the state (e.g. clearly in the church tax system ), which has been regulated in detail by state church treaties since the 20th century .

The Lutheran churches with old denominations have public law status, but do not collect church taxes. Your church members voluntarily pay church fees directly to the congregation. This forwards a certain amount to the general church treasury. Likewise, leaving the church does not take place at the local court, but directly at the rectory in writing.

The also Lutheran Danish Church in southern Schleswig , which looks after the Danish ethnic group in the north of Schleswig-Holstein , has the legal form of a registered association as a free church.

In other countries, for example Austria, Switzerland and the USA, the Lutheran Church is one of various churches due to the stricter separation of church and state.

The common church and the umbrella organization of the Lutheran regional churches in Germany is the United Evangelical Lutheran Church of Germany (VELKD). The member churches of the VELKD are member churches of the Evangelical Church in Germany (EKD), which also includes the Reformed and United Churches . Simultaneous membership in EKD and VELKD is not mandatory. In Schleswig-Holstein there are also Danish-speaking Lutheran congregations under the umbrella of the Danish Church in South Schleswig (Dansk Kirke i Sydslesvig) .

The central organs of the Lutheran Church are the synod as theological, the higher church council as the organizational and the bishop (elected for six years) as spiritual leadership. The church fellowship is divided into seven dioceses, the superintendentures . In total there are about 200 Evangelical Lutheran parishes (parishes) in Austria.

Most of the Protestant Christians in Switzerland belong to Reformed churches. A Lutheran congregation was established in Geneva in 1707, and others in several larger cities in the 19th century. They have been united in the Federation of Evangelical Lutheran Churches in Switzerland and the Principality of Liechtenstein (BELK) since 1967 .

There are two Lutheran churches in Romania: