The title of this article is ambiguous. Further meanings are listed under Ultrasound (disambiguation) . 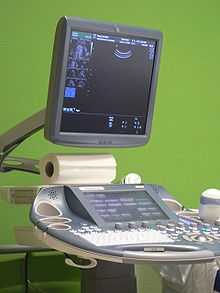 In gases and liquids, ultrasound propagates mainly as a longitudinal wave . In solids, the shear stresses that occur also cause the propagation of transverse waves . The transition from airborne sound to solids or liquids (or vice versa) is only effective with a coupling medium with an adapted acoustic impedance and a certain thickness.

Depending on the material of an obstacle, ultrasound is reflected , absorbed , scattered or passes through ( transmission ). As with other waves , there are also refraction , diffraction and interference .

Air shows a damping for ultrasound that increases strongly with frequency. In contrast, ultrasound propagates in liquids with little attenuation. At high sound pressures, however, vapor bubbles ( cavitation ) form, which can cause extremely high pressures and temperatures when they collapse. At frequencies between 2 and 20 MHz, cavitation in pure, degassed water only occurs from a sound pressure of 15  MPa . Cavitation is z. B. used for ultrasonic cleaning and is also a current research subject ( sonoluminescence ).

Generation and registration of the ultrasonic waves 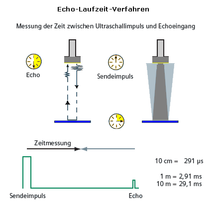 Dynamic and electrostatic loudspeakers and especially piezo loudspeakers are suitable for generating ultrasound in air . H. Membrane-coupled plates made of piezoelectric ceramic, which are excited to vibrate by reversing the piezo effect. Piezoelectric plastics ( PVDF ) can also be used to control diaphragms directly, which leads to improved transmission behavior.

Ultrasound in liquids and solids was initially only generated with magnetostrictive transducers (the first echo sounders worked in this way). Piezoelectric quartz or ceramic oscillators are increasingly used today . An alternating voltage with its natural resonance frequency (or a harmonic thereof) is applied to this. The vibrations are then z. B. transferred via the bottom of an ultrasonic bath into the liquid.

Ultrasound that is not too high frequency can also be generated by Galton whistles .

In principle, ultrasonic waves can be received with the same electrical transducers as are used to generate them. The electrical signals obtained can be subjected to a frequency, phase or amplitude evaluation.

In order to make bat calls audible , there are bat detectors that shift the frequency range of the calls in the ultrasonic range into the audible range and reproduce them via normal loudspeakers or headphones.

Ultrasound has various applications in technology and medicine :

Ultrasonic delay line (duration 64 microseconds) of a PAL - or SECAM - color TV (up to about 1995); open on the left, functionality and sound path on the right

Ultrasound is used in many different ways in industrial production, for example for cleaning, drilling, cutting, welding , processing and process engineering, degassing liquids or non-destructive material testing . When using ultrasound, noise pollution with proportions in the ultrasound and audio frequency range can arise. Ultrasonic welding systems in particular often cause high and strongly fluctuating sound levels , which can have significant proportions in the audio frequency range.

For the effects of ultrasound and its accompanying effects in the high-frequency range, there is only an almost 30-year-old limit value in the area of standards and guidelines in Germany in guideline VDI 2058 Part 2, which only refers to the 20 kHz third-octave center frequency (as of 2016 ). According to the guideline VDI 3766 "Ultrasound - Workplace - Measurement, Evaluation, Assessment and Mitigation", the ultrasound present at the workplace is masked out with a filter and only the remaining auditory sound exposure in the speech frequency range is assessed using a guide value. The guideline does not provide any specific information on the protection of hearing in the upper hearing frequency range and the avoidance of other possible health impairments from ultrasound, such as headaches, nausea or dizziness.

The VDI 3766 guideline supplements the technical requirements of DIN 61672-1 for systems that are used to measure the effects of ultrasound at workplaces. However, there are hardly any such measuring systems for practice to date. With hand-held sound level meters of accuracy class 1, the unevaluated auditory sound exposure can be measured. However, the measurement data must be manually post-processed before the assessment, as uncontrollable measurement errors can occur. The software for "Calculating noise exposure in the presence of air-guided ultrasound" can be used for this purpose.

The Noise and Vibration Occupational Safety and Health Ordinance states that it is responsible for any noise exposure in the workplace. The technical rules for Lärm-VibrArbSchV then restrict the area of ​​responsibility to audible sound (16 Hz to 16 kHz) and explicitly exclude infra- and ultrasound. In addition, there is no information on how a daily noise exposure level is calculated when employees carry out different activities with and without the action of ultrasound. The knowledge about the effects of ultrasound on the hearing comes from old studies, in particular there is a lack of knowledge about dose-response relationships. This is also reflected in the very inhomogeneous national guideline and limit values ​​seen worldwide. Because of these uncertainties, also about the effectiveness of organizational and personal protective measures, it seems sensible to sell machines that emit ultrasound only with encapsulation.

Ultrasound in the wildlife

In the animal world, ultrasound is used for orientation ( echolocation ) and communication. The location calls of the bats show in the frequency spectrum, depending on the species, ultrasound components of up to 200 kHz ( round nose ). Moths hear in the ultrasound range up to frequencies of 200 kHz. Toothed whales, especially dolphins, use echolocation for orientation and especially to locate their prey. The frequency of the clicks is between 120 and 180 kHz. Mice and rats communicate by means of calls in the ultrasound range (ultrasound vocalizations). In the rat, for example, prosocial ultrasound vocalizations with a frequency of approx. 50 kHz trigger social approach behavior.

When there is a lack of water, trees produce sounds in the ultrasonic range. The sounds are created when the water in the vessels, which carry the absorbed water from the roots into the tree tops and leaves, breaks off when it is dry. Cavitation bubbles form, which cause the walls of the water-carrying vessels to vibrate briefly. The intensity of the sounds depends on the size of the vessel and the degree of dryness.