A remote control ( colloquially also known as ( television ) switch , ( television ) pusher or scepter of the modern age , obsolete, especially with television sets that power ) is usually an electronic hand-held device that can be used over short to medium distances (about 6 to 20 m ) Have devices or machines operated. The term radio remote control is used for controls over larger distances . 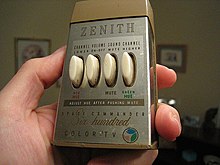 The television remote control was developed in the USA in 1948. At that time it was connected to the television via a cable and could only zoom in or out. 1950 the company Zenith Radio Corporation brought out a wired remote control called Lazy Bones (English for "lazy"), which could switch the programs.

The wireless remote control Flash-Matic followed five years later . It was an idea of ​​the Zenith employee Eugene Polley and worked with a visible beam of light that was aimed at one of four light-sensitive sensors in the corners of the television set. Often just daylight could turn on the television. A year later, in 1956, ultrasound technology replaced the light method. The Austrian Robert Adler , a developer of Zenith, built the “Space Commander” model. It worked without batteries, in that a hammer - similar to a piano - hit a rod that generated the ultrasonic sounds. The "Kadett" model (1958) and a little later "Vector" (1960) followed shortly afterwards from the same manufacturer.

In Germany, the Grundig company sold the wired remote control Grundig Ferndirigent 7602 with a 6 m long cable between 1955 and 1958 , which cost 38 DM at the time and could be connected to Grundig type 4055 radios, among other things . The remote conductor had five sound buttons with light fields for the functions 3D, speech, orchestra, solo and jazz. An active amplifier was located in the eight-pole connection plug, which compensated for the attenuation of the tone control network.

Also in Germany, the first remote control called "magic switch" appeared in 1956 from the Tonfunk company . With it, the radio could be switched on and off wirelessly. From 1959 there were then remote controls with several functions for televisions.

Remote controls can be differentiated according to the transmission medium:

In contrast to IR remote controls, radio remote controls do not rely on an optical view of the receiver and thus also work through ceilings and walls. However, interference can occur when using other radio applications (wireless telephone, video transmission, etc.) and microwave devices .

There are also universal remote controls that can operate a wide variety of devices from different brands.

Devices with a longer range are usually referred to as remote control and work with radio waves .

Devices with only a few functions are called handheld transmitters .

Most remote controls today work with infrared ( light-emitting diodes at a wavelength of 940 nm as a transmitter). To improve the immunity to interference, the radiation is modulated with a frequency of 20 to 70 kHz. The modulation of the signal reduces the power consumption of the transmitter and makes the transmission immune to external light. With infrared remote controls, direct visual contact with the device to be controlled is not absolutely necessary, as IR signals are reflected from many surfaces.

More recent developments use radio frequencies around 2.4 GHz. Among other things, devices can be remotely controlled via mobile phone or computer using remote apps via Bluetooth or LAN / WLAN . This method does not require visual contact.

38 kHz signal from a remote control

Function test with an IR remote control. Most image sensors in digital cameras can make the infrared light from the transmitter LED visible.

IR remote controls send out a signal in the invisible infrared range . Infrared light-emitting diodes are often used as the radiation source . The signal is switched on and off at a frequency around 40 kHz. This increases the receiver's immunity to interference: a bandpass filter only allows these frequencies to pass and blocks random interference signals. Modulation of this transmission signal transmits information to the receiver.

The coding is carried out according to different methods by varying the burst and pause duration (pulse telegram). The audio file shows an example of what an IR signal would sound like:

In the first sound block, pulses with a length of 500 or 1600 µs, separated by approx. 500 µs long pauses, encode the information. The following cracking noises inform the receiver that the remote control is pressed longer and the information from the first block should be repeated. This is followed by two more sequences that convey information about other remote control buttons that have been pressed. The repeat signal is identical. The subtle differences in the information block cannot be heard aurally.

The methods RC-5 and RC-6 , which go back to the Philips company, are widespread . You are using a carrier of 36 kHz. The bursts and pauses each have a duration of 889 µs. The coding is based on a Manchester code . This means that pauses and bursts of single and, at most, double duration occur. A signal packet transmits 14 bits, so that a transmission command is transmitted repeatedly at least ten times per second.

Components of the transmitter (handset) of an infrared remote control

In the handset or in the remote control there is a battery, a control circuit, the keypad and a gallium arsenide light-emitting diode. The control circuit (almost always designed as an integrated circuit (IC)) generates a specific code for each key and supplies the modulated carrier frequency (for example 36 kHz) to the light-emitting diode. A driver transistor is often connected in between for amplification. The modulation frequency is generated by an oscillator , which usually works with a ceramic resonator .

The receiver, for example in the television receiver, consists of a photodiode , a regulated amplifier ( AGC ) that operates selectively at 36 kHz and a demodulator that supplies the digitally coded signal to the control circuit of the device. In front of the photodiode there is a blocking filter that is impermeable to visible light in order to avoid interference, for example from energy-saving lamps.

While such receivers used to be made up of discrete components, they have been available as ICs that incorporate all of these functions since the 1990s. Usually IC and photodiode are integrated in a colored plastic housing that filters out visible light. 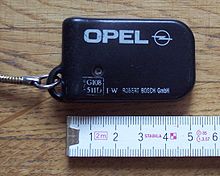 IR remote controls are used for household appliances and especially in the field of entertainment electronics .

Radio remote controls are used, among other things, to open / close garage doors or to lock and unlock automobiles (since the 1990s).

The better alternative is programming via a (well-maintained) database on the Internet (online connection required) and an additional learning function, which can be used to correctly teach-in commands that may not work.

The more expensive universal remote controls also offer so-called "action-controlled activities", i. H. First, all devices used in the home theater are entered from a list on the manufacturer's website using manufacturer information and model designation, the commands are then transferred to the remote control and then logically linked for various actions. For example, at the push of a button, the screen next to the "Beamer TV" shown in the display moves down, the projector switches on, the correct video input on the projector is selected, the A / V receiver switches on and the correct audio input is set. The DVD player then switches on, the light is dimmed and the film starts.

In the above scenario, the universal remote control also controls devices that are addressed via radio, e.g. B. the motorized screen or the lighting via radio sockets. There are inexpensive converters from infrared to radio available in stores, good instructions are given below in the web links.

A special form of the universal remote control was the "Betty", a Swisscom Fixnet device advertised as an interactive remote control . This came on the Swiss market in 2006 and on the German market in early 2007 . The remote control offered games, background information and advertising on the display to accompany the programs of some TV channels. Winnings were paid out as bonus points.

Collected data was transmitted by telephone using a built-in modem. The structure of the system enabled the provider to record the viewing and usage behavior of the viewer.

An alternative operating system for the Betty, the boop firmware, was named after the cartoon character Betty Boop . It works as a universal remote control for the d-box 2, Xbox and other devices.